The Big Bang Theory attempted to challenge the group’s usual dynamic this week, namely by re-introducing a face from Penny’s past, and by unexpectedly pairing up Sheldon and Bernadette for a surprisingly effective subplot. “The Fermentation Bifurcation” is a bit middling in terms of laughs, at least in the core plot, and the ideas are better in concept than they are in execution within said core plot, but at least the episode is pretty entertaining overall, if not exemplary.

The main plot of the episode involves Penny winning a chance to go wine-tasting from her work. The group sees it as a chance to do something new and interesting together, though Bernadette is unable to participate, since she’s pregnant, and thus can’t drink alcohol. Since Sheldon similarly doesn’t drink (at least, not willingly, as he’s had inadvertent alcohol-related mishaps more than once on this show), he decides that it’s a good chance to have a special night with Bernadette, someone that he doesn’t normally spend time with.

Like I said, it’s surprisingly the subplot with Sheldon and Bernadette that elevates most of the episode. At first, Bernadette has the predictable reaction of being confused and annoyed at Sheldon’s plans for the evening, which include train showcases, toast studies and Dungeons & Dragons. As the episode goes on though, Bernadette finds herself enjoying Sheldon’s planned activities a lot more than she would have thought. It was great to have her underestimate Sheldon’s ability to entertain her, without Sheldon deviating away from his areas of interest, which felt both true to Sheldon’s character, and made for a great way to finally tie Bernadette’s pregnancy back into the show in a meaningful way, especially since Bernadette’s kind of been in the background over the past couple of episodes.

Things really go well when Bernadette finds herself becoming attached to Dungeons & Dragons, after Sheldon makes her a character that allows her to feel strong, independent and empowered. This has Bernadette confiding in Sheldon that she’s having trouble sitting on the sidelines, and is being treated more delicately since she became pregnant. Around this time, Sheldon also shares a secret with her, explaining his attachment to trains, by saying that trains always comforted him since childhood, since they represent order in a world that he often finds confusing and overwhelming. It’s hard to believe that it took nine seasons for us to finally learn why Sheldon has such a huge love of trains, but it’s good that there’s still mystery left with his character, especially when a funny running gag in this episode has him tormenting Leonard with the knowledge that he has two secret friends named Frank and Alicia that he hangs out with when Leonard is not around, two people that viewers have obviously never seen nor heard of either.

The main plot however didn’t quite keep pace with this inspired subplot, especially when the laughs felt more sporadic and uneven here. The plot serves as an excuse for Raj to introduce Claire to the group, which is fine on paper, but the episode does surprisingly little with Claire’s first proper interactions with the gang. She just kind of shows up, and then the episode introduces a major curveball, namely by bringing back Zack, Penny’s old boyfriend that was seen several times in earlier seasons, long before she married Leonard. This completely distracts from the milestone of Claire meeting the group, unfortunately, even though it is a lot of fun to catch up with Zack at the same time. 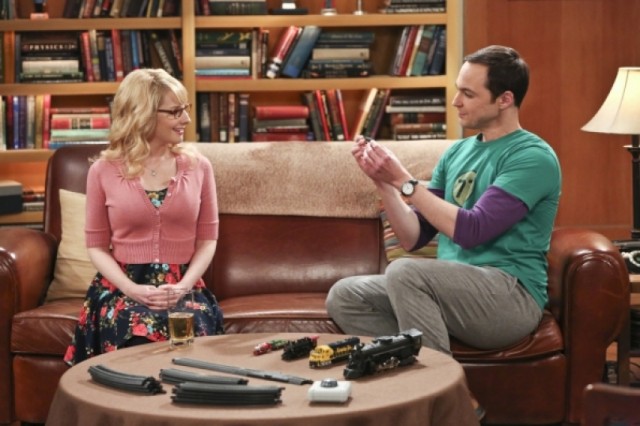 Zack hits on Claire several times and makes Raj uncomfortable, which, again, is an interesting idea on paper, but the episode doesn’t do much with it. Instead, Raj trying to talk down Zack serves as a lead-in to him inadvertently blurting out to Claire that he’s dating multiple women. Then, the episode just kind of leaves that turn hanging, which is lame. It also begs the question of why Claire would seem to be so affected by this revelation, given that she’s stressed to Raj that things are quite casual at the moment. Considering Claire’s established personality, it also doesn’t make sense for her to get bent out of shape over this, begging the question of why she didn’t shrug. This was supposed to be a big finish to the episode’s main plot, but instead, it kind of fizzled, and it’s anyone’s guess as to how this may affect Raj’s dating situation over the season’s final two episodes, if at all.

Another thing that’s brought up in this episode, but not truly resolved, is Zack pointing out to Leonard and Howard that a recent invention of theirs could be hijacked and abused by the military. Apparently, Leonard and Howard have both worried about this separately, and are forced to discuss it in the bathroom. This made for a pretty shocking moment for Howard at least, who says that the two can’t stop the experiment out of fear, especially since Howard really needs the money it would net him to take care of Bernadette and his unborn child. This might create a semi-interesting conflict in Season Ten, but given that Season Nine is almost done, it’s probably too early to properly flesh out a conflict like this at this point, especially since Bernadette definitely won’t be having her baby this season, barring any sudden and bizarre time skips.

“The Fermentation Bifurcation” could have gone a lot further with the ideas in its main plot, but fortunately, the subplot with Sheldon and Bernadette helped to pick up the slack. The questions raised by Leonard’s and Howard’s experiment, as well as the fallout from Raj being caught red-handed two-timing, frustratingly weren’t resolved this week, though maybe they’ll serve as story turns for the season’s climax in a couple of weeks. Either way, it was nice to have a good Bernadette storyline again, for the first time in a while, and the idea that Howard is throwing ethics to the wind to do what’s necessary for his family could give his personality a compelling makeover in Season Ten.

The Big Bang Theory 9.22: "The Fermentation Bifurcation" Review
The Big Bang Theory was largely carried by its funny and creative subplot this week, though the main plot does potentially present a great character turn for Howard.
THE GOOD STUFF
THE NOT-SO-GOOD STUFF
2016-04-29
77%Overall Score
Reader Rating: (1 Vote)
42%