Legends of Tomorrow once again took the fight directly to Vandal Savage this week, and has the show moving towards the climactic showdown with the immortal super-villain. “Leviathan” brought the team to 2166, the same year in which Rip Hunter’s family is murdered by Savage, with Rip placing the crew mere days before his family is killed, thinking that it’s the only other chance that the group will have to finish Savage once and for all.

As the planet begins to be devastated in the future, Rip and co. make contact with the local resistance group, who are on their last legs, as Savage’s army grows ever stronger. After a failed attempt to sneak into the army and gather intel, the team learns that Savage’s right-hand woman wears an important bracelet, which is in fact the same bracelet that Kendra wore during her original death in Egypt. This means that the bracelet can be used to kill Savage, since objects present at Kendra’s original death point can be used to destroy the villain… Though an obvious snag comes up, in that a bracelet is certainly not a lethal weapon.

This led to a lot of standout material for Kendra this week, while also setting up a fun heist element that had Leonard and Mick be of utmost use to the team in a great way. After the ill-advised plan to just snatch the bracelet off of the lieutenant’s arm is put into action, Leonard and Mick are surprised to learn that the mysterious woman knows all about them and their team. Confused, they take the woman into custody, where she tells Leonard that she’s not just Savage’s lieutenant, but also his daughter! Before DC fans get too excited though, this apparently isn’t Scandal Savage, Vandal Savage’s anti-heroine daughter from DC Comics lore. Instead, she’s simply known as, “Cassandra”, and seems to be an entirely different character altogether.

Eventually, after some clever thinking, Kendra has Mick melt down the bracelet, which she then uses to coat Carter’s mace, effectively making it a usable weapon against Savage. Yes, finally, Hawkgirl gets her iconic mace from DC Comics lore in this episode, though Mick raises the predictable question of whether Kendra has the resolve to truly strike the killing blow against Savage when the time comes. Kendra seems sure, but obviously, the season isn’t over yet, so Kendra’s probably going to be more confident than most of the viewers are, not to mention Mick. 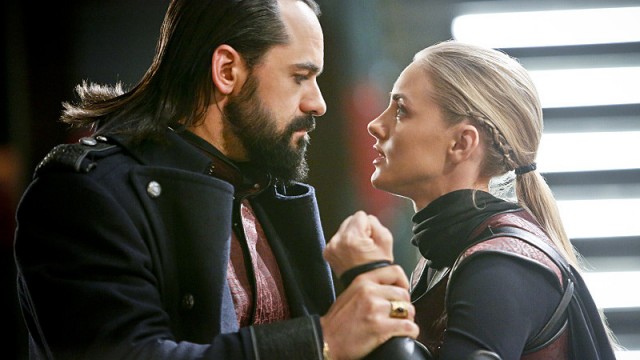 It’s really too bad that the show isn’t introducing Scandal Savage here, since Leonard shows Cassandra the truth about her father, and how he unleashed the Armageddon Virus, not Per Degaton as she believed, and that has Cassandra deciding to fight for the good guys. Maybe it’s a bit quick, but the video evidence presented by Gideon is pretty hard to refute. It’s too bad that Cassandra doesn’t ultimately stick with the team beyond this episode though, since the ensemble is no doubt set for the rest of Season One.

Regardless, the Waverider is forced to take on a bunch of refugees, right before everyone finds out that they’re being attacked by Savage’s hidden super-weapon, which just so happens to be a giant-sized Atom robot, much like the Atom soldiers that the Degaton family was commanding during the team’s previous trip to the future. The giant robot, Leviathan, disables the Waverider, and has the team appearing as if they’re going to die any second. Ray however, enacts a desperate plan, while the rest of the crew, minus Martin and Jefferson, since Martin was injured when the ship was disabled, go after Savage. 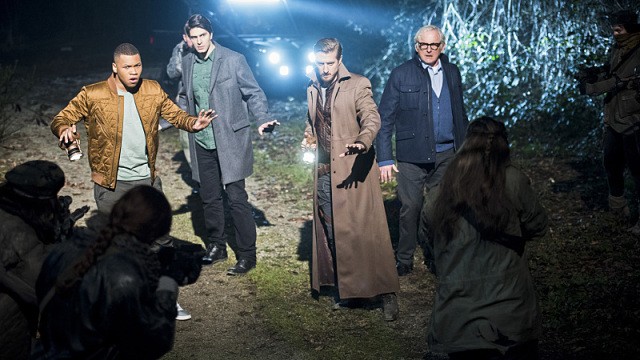 This already exciting episode then spills into a truly excellent climax, packed with action, and even having some surprisingly great twists! After some teasing, Ray finally reverses his Dwarfstar polarity in this episode, and grows to a massive size to take on Leviathan! Atom is able to grow big like this at will in DC Comics lore, but so far, Ray’s abilities have only been used for shrinking, so it’s very satisfying to see Ray’s technical know-how finally allow his suit to grow and become equally useful that way. The fight with Leviathan is also pretty entertaining, if blatantly CG-heavy, though it’s tough not to cheer when Ray strikes the killing blow by punching the robot’s head to pieces! That’s just awesome, especially on a television budget!

Likewise, the climactic scuffle with Savage and his goons is a lot of fun as well, even with Firestorm sitting this scrap out. Kendra even appears to have Savage on the ropes, and is about to finally kill him with her mace, until she’s distracted by a guard. What begins as a small nuisance turns into a shocking twist too, when Kendra knocks the guy’s helmet off, and sees that it’s none other than Carter! Apparently, Savage brainwashed Carter, and has forced Carter to fight in his army, which leaves Kendra with an impossible choice; Kill Savage and lose Carter forever, or spare Savage for a chance at regaining Carter, but doom Rip’s family in doing so. Three guesses what she does. Still, Kendra being outwitted by Savage in such a heartbreaking way, and Kendra having to make the impossible decision that faces her, was a big moment for her character, even if it’s a transparent way to prolong the Vandal Savage conflict, since this season still has three episodes to go. Instead, Savage is imprisoned on the Waverider, and most of next week will probably center around that. Fair enough, I guess. 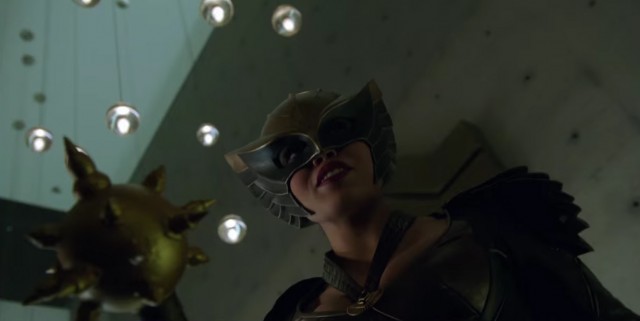 “Leviathan” was quite a lot of fun, and definitely the best Vandal Savage-focused episode that the show has delivered in quite some time. The increasing stakes and desperation behind Rip and his crew were really felt this week, and the way that everything led into an especially great climax was all the more impressive! The Ray/Leviathan fight didn’t always look convincing, but it was still very cool, and even if Kendra opting not to kill Savage might annoy some, at least the shocking return of Carter should be a nice way to sustain the rest of Season One. It’s effectively infuriating to have Savage be so close, and yet so far. The team seemingly has Savage right where they want him now, but as Savage’s resilience has proven, it’s doubtful that this will last long.

Legends of Tomorrow 1.13: "Leviathan" Review
Legends of Tomorrow delivered an exciting episode that raised the stakes of the show nicely this week, as the team takes the fight directly to Savage in the future.
THE GOOD STUFF
THE NOT-SO-GOOD STUFF
2016-04-29
88%Overall Score
Reader Rating: (0 Votes)
0%