Fear the Walking Dead was incredibly refreshing this week, not necessarily because of its storyline, although it did pack in some exciting surprises, but mainly because this week’s episode was actually pretty great! Despite this series struggling to be entertaining since its very first episode last year in many respects, “Blood in the Streets” had Fear the Walking Dead presenting a legitimately engaging and shocking plot, one that revealed some big secrets about Strand in particular.

The episode begins with an intriguing cold open of Nick going ashore for some mysterious agenda, once again utilizing the Walker guts trick to avoid becoming a meal for the undead, after he discovered it by accident during the previous episode. This conveniently separates Nick from the main action of the story, so he can serve as an ace in the hole for later, but it does lead into a subplot that ties well into the show revealing more of the origins of Strand, and just how he encountered Nick in the first place during the military occupation from Season One. 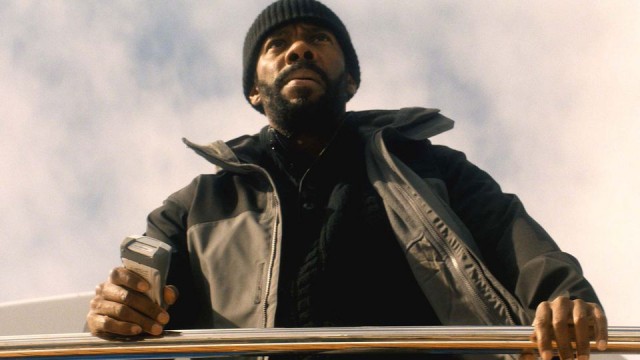 Turns out, Strand, as suspected, was something of a con man in his former life, and ended up grabbing some money from a powerful businessman, after Hurricane Katrina ends up upsetting Strand’s own business holdings, leaving him pretty much ruined. Strand’s victim, Thomas however, surprisingly doesn’t turn Strand in when he’s caught, but instead partners with him. It’s also revealed that Thomas’ surname is Abigail, explaining how Strand got ahold of the yacht that the survivors are currently sitting on. Not only that, but an especially surprising reveal, albeit a pretty neat one, is that Strand is a homosexual, and that Thomas is actually his boyfriend, which explains why Strand seems to have a highly convenient escape route already mapped out, despite the mysterious means by which he seems to have found it.

This was actually a pretty great twist, since it was easy to suspect that Strand’s innate un-trustworthiness meant that he was inevitably going to sell out the survivors to some bad people. Turns out, that mysterious voice on the walkie-talkie that we didn’t hear was Strand’s boyfriend of all people, and despite Strand being mostly taken out of the present-day events over the course of this episode, the way that the story still filled in the blanks with him, while ensuring that he did survive and rejoin the others in the end, was smart and well-executed, especially for Fear the Walking Dead standards. 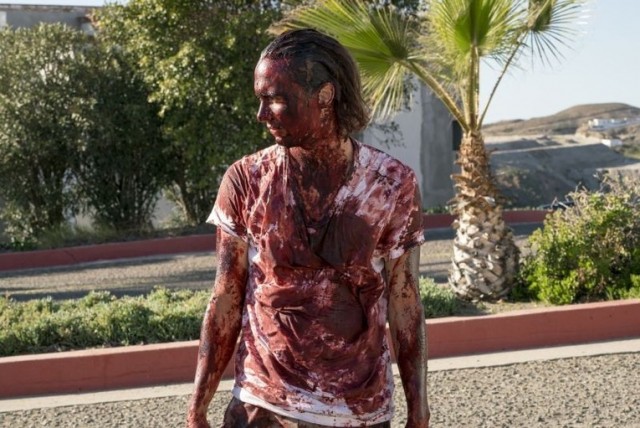 The only thing that wasn’t smart about this otherwise strong story direction is the forced justification for Strand being removed from the main plot, which is done by him trying to abandon the Abigail in a life raft when villains attack. Where exactly was he going to go?! The yacht doesn’t even properly belong to Strand, so I doubt that Thomas will be happy about Strand simply giving it up to pirates, assuming that Strand somehow paddled his way all the way to Mexico, inexplicably. Not only that, but doesn’t paddling away in a life raft blatantly make you a sitting duck to people with guns that can clearly see you? Sure enough, Strand’s life raft gets riddled with bullets, and the ringleader for the conquering bad guys even states that hypothermia will kill Strand if the bullets don’t… And then that just doesn’t happen. As much as the rest of the storytelling about Strand’s past was great, this was the one part of it that felt contrived and frustrating, especially when Strand found himself a gun, and could have easily bottlenecked the grand total of three attackers and cut them down from the bridge, especially if they didn’t know he was there!

Regardless, as you can imagine, the guy that Alicia was talking to was working for a bunch of bad guys who, while not exactly pirates, do have no trouble pretending to be in distress, before forcibly taking the Abigail, and tying everyone up. Nick is ashore at that point, like I said, and makes contact with an old associate of Strand and Thomas, hence why he can become a Deus Ex Machina that can bail everybody else out at the end of the episode, but at least the claustrophobic takeover was nicely exciting and intense. Travis even got his latest chance to be useful, after the attackers threaten to shoot Chris if Travis can’t get the boat started, due to Strand having the key, and the ringleader shooting Strand’s raft. Nobody said these guys were smart villains, I guess, even if Strand’s escape plan was equally stupid.

Fortunately, there’s some solid setup for the show’s first proper recurring antagonist in this episode, when a man named Connor is brought onto the yacht, and negotiates for the family to take another boat away, so long as Connor grabs the Abigail. Being surprisingly level-headed and tactful, Connor is seen as having a sharp mind and a big heart, but a weak stomach, making him a very interesting and complex antagonist, if that’s how the show is going to keep portraying him. Connor even takes Alicia and Travis as the episode winds down, leaving the group splintered, and no doubt setting up next week’s episode to have everyone else debate rescuing them, which Strand will probably have his arm twisted to go along with, since Madison pulled him out of a watery grave.

After a pretty good episode last week, it’s satisfying to see Fear the Walking Dead do even better this week, possibly delivering its best episode yet overall! Of course, I’m not inclined to start trusting this series to maintain a quality standard just yet, since the show could return to disappointment next week, but, “Blood in the Streets” is a very promising step forward for this spin-off. Between strong flashback material, a promising new villain, and overall tense, exciting pacing, Fear the Walking Dead seems to slowly be starting to find something of a foothold, after Season Two’s rough start. Again, that foothold could be lost next week, but hopefully, this better direction keeps up for as long as it can.

Fear the Walking Dead 2.4: "Blood in the Streets" Review
Fear the Walking Dead delivered a genuinely great episode this week, as Strand's backstory is revealed, while the survivors face a tense attack on the Abigail.
THE GOOD STUFF
THE NOT-SO-GOOD STUFF
2016-05-02
88%Overall Score
Reader Rating: (0 Votes)
0%