It’s kind of ironic that Vandal Savage has never been a better villain in the DC Television Universe than when he’s been captured and seemingly neutralized. “River of Time” provided a great way to continue the Savage mission while the villain is seemingly helpless, and despite a few problematic story elements, the episode ending with some fantastic setup for the season’s final two episodes was very exciting.

The entirety of this episode was spent in the Time Stream, as the team learns that the attack by Savage in the previous episode has crippled the Waverider. Needing to get to the Vanishing Point to deliver Savage to the Time Masters, the team takes turns interacting with Savage, and re-examining their separate agendas, as the mission winds down, or at least appears to. This means having Ray confront the implications of his relationship with Kendra, Leonard and Mick getting antsy to go back to 2016, and Rip gathering whatever evidence is necessary to prosecute Savage and save his family once and for all.

Something that really worked to this effect is highlighting flashback scenes that showed what most of the team was doing before hitching with Rip at the very start of the series. Leonard, Mick and Kendra are omitted, but the heroes formerly established on Arrow and The Flash were given some great scenes here, especially with opportunities for Emily Bett Rickards and Katrina Law from Arrow to provide some emotional guest appearances. There’s a great element of tragedy to many of these scenes, as people like Jefferson’s mother, Martin’s wife and, of course, Felicity and Nyssa, have no idea that, in the current timeline, they’ll never see any of these people again. It really does make you take stock of what hunting Savage has cost everyone, and what they’ll have to go back to, now that the mission is seemingly over.

The many interactions with Savage and Carter also made for standout scenes, as Savage gets under the skin of several of Rip’s crew members, along with Rip himself, with Ray helping Kendra to try and get through to Carter. Jefferson is kind of separated from the action, since a request by Rip has him zapped with time radiation that leaves him rapidly aging, and this is where Martin gets his chance to play off of Savage. Inquiring about the ritual of immortality from earlier in the series, Martin tricks Savage into proving a point he’d been pondering about time travel, and then forcibly drugs Jefferson and uses the crew’s only escape ship, programmed for a one-way trip back to 2016, to get Jefferson to safety and cure his condition, stranding everyone else in the Time Stream in the process.

This was a very bold move by Martin, and one that doesn’t sit well with Leonard and Mick especially, but there’s little time to wonder, since Ray eventually loses his composure, between Savage taunting him about Kendra, and Kendra appearing to fall for the brainwashed Carter again, leading to Ray opening Savage’s jail cell and beating on him. Of course, Savage eventually gains the upper hand, and Ray is instead knocked out, as Savage is left to run loose, free Carter, and attack the ship. This was one of the more annoying story elements in this episode, since Ray was uncharacteristically stupid here. It feels like the show didn’t have a good excuse to get Savage out of confinement, so it had to force one, even though Ray really should know better than trying to go into a jail cell and beat up an immortal warlord who has a hundred times more fighting skill. Like, really, Ray. Come on!

Naturally, Ray’s mistake snowballs into a big skirmish, forcing Martin, Sara and Rip to start getting the Waverider moving to the Vanishing Point finally, as Ray, Kendra, Leonard and Mick all try to fight off Savage and Carter. Most of them are incapacitated in the end, save for Kendra, who is nearly killed by Savage herself, which is enough to somehow snap Carter back to his senses. Carter manages to save Kendra, though he’s stabbed in the process, even if this does give Kendra an opportunity to subdue and recapture Savage, saving everyone in the process. It’s not often that Kendra saves the day, but at least this nicely made up for her stupidly letting Savage live in the previous episode. Even Martin suddenly doubts whether they should kill Savage this week, and that really has you wondering why several crew members have suddenly forgotten the whole purpose of their mission through time for some reason.

Again, things look to be well, as the Waverider finally reaches the Vanishing Point, and Kendra and Ray break up. Yep, just like that, without much impact or buildup or anything. Their relationship was really uneven in terms of appeal anyway, and I doubt that this is a big loss for the show, but it feels cheap to just toss Carter back in, after he survives being stabbed, then immediately break up Ray and Kendra, which somewhat makes the whole Ray/Kendra relationship feel like a giant waste of time that was bound to go nowhere.

At least the bleak conclusion of the episode was a better way to wrap things up, and present a great lead-in to the season’s big climax over the next two weeks. Rip finally brings Savage to the Time Council, with proof that Savage was manipulating time for his own ends (apparently, the reason why Savage was so hard to locate throughout history is because he stole some of Rip’s own time travel capability), and… The Time Council lets Savage go, returning him to 2166. Yes, the Time Masters were in league with Savage the whole time, and this leaves Rip stunned, as he and his entire team are arrested, and thrown into the Time Masters’ prison. The episode’s final seconds then have Savage promising to pay a visit to Rip’s family in 2166, and this has Rip screaming and banging on the cell as the episode closes out. Wow. That’s pretty grim, but also pretty exciting in terms of challenging the team. Vandal Savage finally feels like he’s reaching his proper potential as a big bad for this show here, which is why it’s a bummer that it took so long in the season to finally have him become the kind of awesome baddie that he is in DC Comics lore. 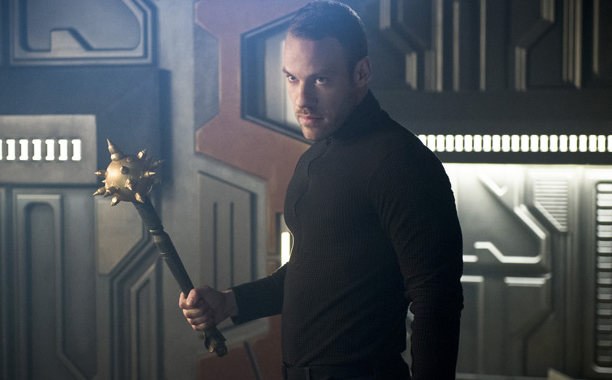 “River of Time” presented a great preamble to the season’s final big storyline, giving the team a chance to take stock and see through their mission, before getting smacked down by a pretty major curveball that sees all of them taken out at once. The only exception is Jefferson, who presumably made it to 2016, and that means that Martin won’t be able to use the power of Firestorm to get everyone out of the big jam that they’re now in with the Time Masters. Even with their mission accomplished, things have never looked worse for Rip’s team, but that at least comes with Legends of Tomorrow laying the ground work for a thrilling end to Season One, now that the show’s current villains feel as unpredictable and dangerous as Rip has made them out to be.

Legends of Tomorrow 1.14: "River of Time" Review
The team may have accomplished their mission, but Vandal Savage has never been more dangerous than he is this week, resulting in a very thrilling and interesting episode that effectively sets up the season's big climax.
THE GOOD STUFF
THE NOT-SO-GOOD STUFF
2016-05-06
85%Overall Score
Reader Rating: (0 Votes)
0%