UPDATE: EA has now officially announced the game, following their world premiere presentation on Twitch, and as the leak claimed, the game will be called, “Battlefield 1”, and will be releasing on PC, PlayStation 4 and Xbox One. As speculated, the game takes place in WWI, and will feature the Battlefield series’ usual high pedigree of customization, weapon balance, vehicular combat, and more. Developer, DICE also teased some WWI-inspired twists, such as being able to ride horses, wield flamethrowers and chlorine gas, and push through enemy lines with the crude tanks of the era. More details on the game are set to be announced in the coming months.

EA has been making a big show of announcing the next game in their highly beloved Battlefield series today, but it looks like Microsoft may have accidentally let the cat out of the bag early. An image showed up on people’s Xbox One consoles earlier today, ahead of the next Battlefield game’s reveal at 4:00 P.M. EST, showing a soldier with the familiar orange-and-grey backdrop of the Battlefield games, wielding old-time war weapons, and backed by zeppelins.

While this certainly doesn’t give us any proper information on the game itself, it does seem to confirm recent rumours that the next Battlefield game will take place in WWI, or perhaps some alternate version of it. This Battlefield leak on Xbox Live is also incredibly ironic, considering that the PlayStation Store recently accidentally revealed Activision’s competing Call of Duty: Infinite Warfare ahead of its official announcement.

A certain retail employee on Reddit has also exploited the leak by uploading an image of a retail poster for the game, which appears to confirm that it’s titled ‘Battlefield 1‘, likely referencing the game’s WWI-era backdrop. You can check it out below: 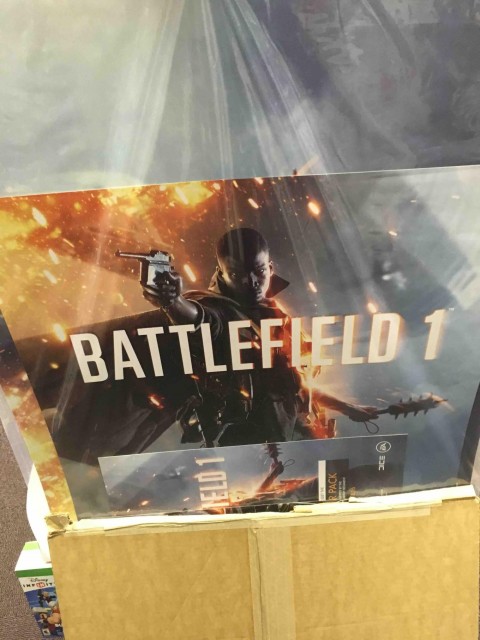 The same leaked poster appears to indicate that Battlefield 1 is set to release on October 18th of this year, and that pre-ordering customers can secure something called the Hellfire Pack, which features the, “Harlem Hellfighter military regiment.” It would also appear, surprising no one, that the game is set to release on PC, PlayStation 4, and, naturally, Xbox One, with the Xbox One version likely being offered to EA Access members a few days early.

EA obviously hasn’t commented on the leak, but be sure to tune in to their proper reveal of Battlefield 1 later today, at http://www.battlefield.com/event. We will update this article with official information on the game, but in the meantime, keep charging Eggplante for all major news and updates on Battlefield.