With the race now being on to prevent Darhk’s nuclear holocaust, Arrow delivered a tight, urgent episode in, “Monument Point” this week. With Thea cut off from the team, and a hijacked A.R.G.U.S. algorithm leaving just twenty-four hours to stop a launch of several nuclear weapons that will destroy the surface world as Darhk prepares to build a new one underground, Team Arrow is left with no other option but to team up with an old foe to set things right. Yes, Darhk just stole a magic algorithm that somehow launches nukes from anywhere in the world, apparently. That plan is pretty unrealistic, even for Arrow, since nuclear sites aren’t online, anywhere, and you can’t just hack a nuke and launch it, given the bazillion analog fail-safes on them, but whatever, I guess this is the DC Universe, so we can suspend our disbelief.

The obligation of having to work with a former villain was a great hook for this week’s episode in any case, as Felicity must swallow her pride and get in touch with her father, Noah Kuttler, a.k.a. The Calculator, to help her remotely shut down the nuke launch. Conveniently, Noah was among the villains that escaped from Iron Heights Prison during Darhk’s recent jailbreak operation, and two of the other major baddies, Murmur and Brick, have since joined Darhk’s forces as they hunt for Noah. Darhk is fully aware that Noah is one of the only people on the planet that is capable of stopping his nuclear plans, though fortunately, Team Arrow manages to bail Noah out of an unceremonious death at the cabin where Felicity happened to be conceived. Interesting little detail there.

After Felicity directly handed her father over to the police several weeks back, this episode’s panic-fueled storyline made for a great way for her to confront her actions, as well as possibly creep the door open just a bit to improve her relationship with her father down the line. Whether Felicity likes to admit it or not, she really does work very well with her father, especially when she’s removed from Palmer Technologies, and then has to subsequently break in and steal a program that is necessary to help stop the nukes.

Oh yeah, Felicity was fired from her job at Palmer Technologies in this episode. While this was pretty sudden, it does seem to position Felicity firmly within Team Arrow again for Season Five this Fall, effectively giving her nothing else beyond her superhero-assisting duties at this point. It also works in the sense of creating unforeseen consequences for Felicity having to step up and save the world, especially since she can’t simply blurt out to her board members that she needs to stop Damien Darhk from obliterating the world with nukes. The board immediately voting to remove Felicity because they don’t like her low price for the bio-implant chips is a pretty big stretch, but I suppose that they’re more likely just fed up with her being so unavailable at this point.

Anyway, after Noah proves to be a surprisingly effective ally, his presence helps free up Oliver and Diggle to take on Darhk’s forces, as they assist in accommodating Felicity, Noah and A.R.G.U.S. in stopping the nukes. This episode had some pretty strong action scenes too, especially in the climax, as Oliver and Diggle have to frantically fight through a bunch of Ghosts, on top of taking down Brick and Murmur. Despite everyone’s efforts however, one of the nukes launches anyway, and Felicity is only able to slightly divert it from hitting Monument Point, a recently-introduced larger city in DC Comics lore (no affiliation with the Justice Society in this case, obviously), though at the cost of it still hitting a small town called Havenrock, killing tens of thousands of people. This difficult, somber conclusion worked very well to close out the episode, especially since this alleged failure will no doubt haunt Felicity well into Season Five now, and things only get worse for the team when Oliver and Diggle manage to find Darhk on a Ley Line beneath City Hall, now with plenty of fresh death-fueled magic absorbed into him, which ends the episode. That’s not looking good for next week’s episode, that’s for sure!

Considering the very exciting and effective main conflict in this episode, it’s unfortunate that the subplots didn’t work quite as well, and often came off as filler material. Captain Lance has to sign an affidavit saying that he didn’t know that Laurel was Black Canary in one of them, which will help exonerate him from working with Darhk and get him his badge back, then Donna is sad about it, so he doesn’t do it, and that’s it. Frankly, the Lance/Donna plot should have been cut out and left for another episode in Season Five, because there’s just no room for it now. Likewise, Anarky somehow manages to learn about and infiltrate Darhk’s super-secret underground Ark, the very same one that Thea is in, forcing Thea and Merlyn to chase him around, though this simply served as a roundabout excuse for Anarky to sort of possibly kill Alex by electrocuting him towards the end. Honestly, the show is kind of vague as to whether Alex lives or dies here, but considering that Season Four is almost done, I wouldn’t be surprised if Alex did indeed buy the farm, since it’s unlikely that his character has anywhere left to go from a narrative standpoint. 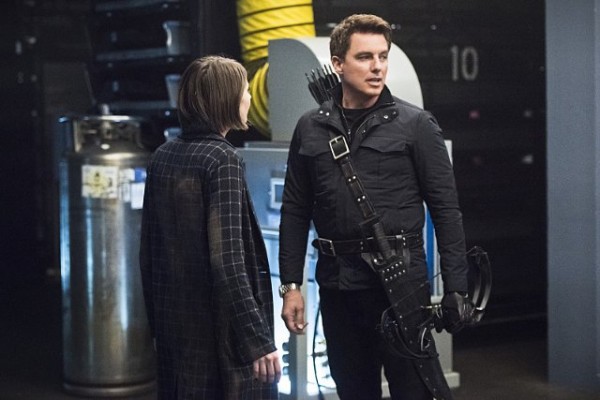 The flashbacks also sort of tread water this week, as they simply show Oliver and Diana running around in a panic, now back on the surface of Lian Yu, as Reiter and his forces start rising up. Oliver tries to get Diana to get the prisoners to safety off of the island, though she returns to witness Oliver now being unable to shoot a very-much-alive Reiter dead. The two try to run off with Reiter’s idol, and make it a fair distance, though not before Diana starts getting those glowy eyes that were recently foreshadowed with Esrin Fortuna, and that’s where the flashbacks end. Since this doesn’t tell us anything about magic, Reiter or Lian Yu that we didn’t already know, these flashbacks, much like the less interesting subplots, just waste time and distract from the main stakes in the end.

The heavy stakes of the thrilling main plot entirely carried this episode, and it would have been one of the season’s best, had it not had to divert its focus on secondary story elements that simply intruded on the high stakes. “Monument Point” is still a very good episode of Arrow, but the weak subplots and flashbacks feel like they hold the episode back from achieving its true potential as a way to really create consequences and quite literal fallout from Darhk’s plans. Even with Felicity’s intervention, tens of thousands of people are already dead, and Darhk certainly won’t be slowing down, now that he’s got more magical power than ever!