Hot damn! Are we sure this isn’t the season finale?! It’s hard to believe that Legends of Tomorrow still has one episode to go before it wraps its first season next week, since, “Destiny” could have easily capped off the season as an excellent conclusion to the first batch of adventures with Rip Hunter, were it not for the wiggle room at the end for said season finale next week. Still, this was a fantastic penultimate episode for Season One, especially when the team suffers a shocking loss in freeing themselves from the menace of the Time Masters once and for all.

After last week’s similarly strong episode, most of the team find themselves held captive by the Time Masters, save for Sara and Leonard, who are hiding on the Waverider, pondering their next move. As Martin lies dying, having been separated too long from Jefferson, who he must merge with every so often to preserve nuclear cohesion, Rip is then taken to the chamber of the Oculus, the secret to the Time Masters being able to see and manipulate time so effectively. Shown a dismal future that he cannot alter or save, Rip also sinks into despair, as Mick is prepared for re-conditioning to once again become Chronos, leaving Ray as the only remaining positive voice in the room.

The idea of Savage being the lesser evil in the eyes of the Time Masters, since his takeover is necessary to unite the world against the coming invasion by the alien hawk people, the Thanagarians (suggesting another big plot element for Kendra and Carter in the show’s upcoming second season), is very interesting, and a great twist. It was also great to learn that every action that the team has taken has been carefully controlled by the Time Masters using the Oculus, which has allowed Rip to inadvertently become the instrument of Savage’s success at key points in history, with the Time Masters leaking Savage’s whereabouts so that Rip could unwittingly keep him on course for taking over the world. Damn. So, in a sense, not only was Rip’s journey in vain from the very beginning, but Rip was indirectly responsible for the murder of his own family, which was foreseen from the beginning as a motivating element by the Time Masters.

Things look bad, though they never became too depressing, as Jefferson cleverly enlists the help of Martin a day before the mission in 2016, after his jump ship takes him back to Central City as planned, in order to get back to the Vanishing Point and help fight off the Time Masters. Likewise, Sara and Leonard have some bonding time, and eventually devise a plan to save everyone, despite Leonard wanting to get out of dodge at first. Mick even resists the conditioning to avoid becoming Chronos a second time, though as everyone escapes, with Jefferson still in the past at that point, Rip is still haunted by one of the visions from the Oculus; Ray being killed in an explosion very soon.

Nonetheless, the group has to plan their final assault on the Time Masters, and the device of seeing that their future is seemingly set in stone, and wanting to alter it anyway, really highlights just how much this team has come together over the course of the season. Mick even begrudgingly admits that he’s concerned over news of Ray’s death, even if he also cautions Ray that if he tells the team that Mick cares about the others, Mick will shave his head. As funny as that would be to see, it is nice to see Mick becoming a lot more than a simple-minded thug, with his time as Chronos and relation to the Time Masters’ evil making him far better developed and interesting than he’s ever been not just on Legends of Tomorrow, but from the times he first debuted on The Flash too!

When the team finally decides to destroy the Oculus, things lead to a very exciting climax as well! At first, it looks like Time Master Druce has yet again anticipated their actions, having a squad of soldiers ready for the team at the Oculus’ core, though Jefferson’s jump ship comes to shoot them all dead, even if Druce escapes for now. Jefferson then merges with Martin, allowing Firestorm to join in the fun, as everyone goes to town on the Time Master soldiers!

Things get complicated however, when Ray tries to disable and overload the Oculus core, only to learn that there is a fail-safe that forces him in place, effectively ensuring that he will die in the explosion, causing Rip’s premonition to come to pass. What follows is a great succession of surprises though, as Mick knocks Ray out and takes his place, defying the future, and allowing Rip to shrink Ray down and escape with him. Once Leonard learns that Mick is sacrificing himself for the team however, Leonard in turn knocks Mick out, and then takes his place yet again, leaving Sara to drag Mick off, but not before she shares a single kiss with Leonard. Given how much these two have been growing closer, this was a very well-earned and heartwarming moment, even if it also quickly ended in tragedy, as Druce and his soldiers surround Leonard, only to have Leonard declare in very badass fashion, “I have no strings on me!” before allowing the core to blow, killing himself, Druce, and all of the soldiers in the area as the team flies away in the Waverider! Yes, Legends of Tomorrow went there. Leonard Snart actually died saving everyone!

Before you throw your remote through the television and rage at the show killing off one of the best characters in the DC Television Universe however, take a breath. The showrunners, along with DC Television Universe lead producer, Greg Berlanti, have already confirmed that Leonard’s ‘death’ isn’t going to stick, and that it will simply serve as an excuse to soft reboot the character with a new place in the DC Television Universe. While Wentworth Miller is indeed no longer a series regular on Legends of Tomorrow, he will still show up on the series every so often in Season Two, as well as operate as a recurring antagonist on The Flash during its upcoming third season once again. There’s even the likely possibility that Miller will portray the character on Arrow at some point next season too, along with Supergirl, which will be fully inducted into The CW’s DC shows with its second season later this year! So, even if Leonard dying in the short-term seems like bad news, it’s really not, since it sounds like we’ll be seeing more of Captain Cold than ever in the DC Television Universe next season!

The short-term loss of Leonard Snart wasn’t the only tragedy that hit the team either, as, despite all of Rip’s efforts to defy the future, and liberate history and his team from the Time Masters’ control, he still failed to prevent Vandal Savage from killing his family in 2166. That was effectively heartbreaking, and will once again force the team to piece themselves together again for the final battle against Savage in next week’s season finale, with Savage still holding Kendra and Carter hostage for the time being. I believe Mick puts it best to Ray as the episode winds down, saying that the team has destroyed the Oculus and obliterated the Time Masters, but he still feels the need to kill someone to avenge his partner-in-crime, and Savage will do quite nicely. 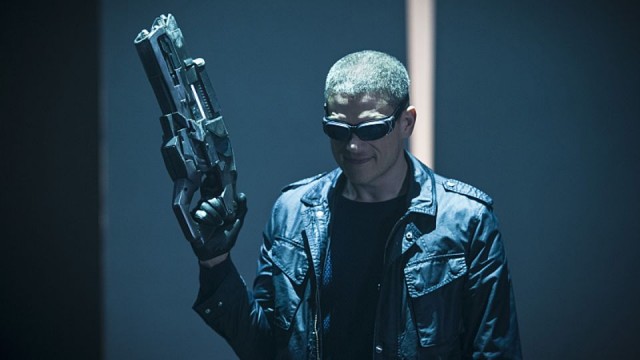 “Destiny” elevated Legends of Tomorrow to spectacular new heights, to the point where it might create an inadvertent obstacle for next week’s season finale, as this episode will be an incredibly tough act to follow. Nonetheless, the show capped off the Time Master conflict with aplomb this week, while also creating a huge cost for the team as a whole to suffer, and test their strength as the final battle with Vandal Savage approaches, Rip and Mick especially. With nothing else left to fight for, the team merely has to finish what it started now. If they can’t save Rip’s family, then they can at least avenge them!

Legends of Tomorrow 1.15: "Destiny" Review
Legends of Tomorrow soared with its best episode to date this week, as the team finishes the fight against the Time Masters, and suffers a heavy cost for it.
THE GOOD STUFF
2016-05-14
96%Overall Score
Reader Rating: (0 Votes)
0%