After stumbling again with a pretty disappointing episode last week, Fear the Walking Dead righted itself a little bit with, “Sicut Cervus” this week. While still not a great episode by any stretch, this episode was at least pretty watchable, especially since it brought the characters to an interesting new location, and set up a new possible villain to replace the one that the show quickly disposed of last week.

At last, everyone has reached Baja, barring one minor complication between Strand and the border guards, which results in a gunfight… That we don’t see, since the scene lingers on everyone hiding in the cargo hold. That’s pretty lame. Oh, and apparently said off-screen fight resulted in Luis getting shot and killed, before passing a coin on to Daniel, who just tosses it overboard, despite Luis wanting him to give the coin to his mother. That same creepy owl face on the coin is also seen later, suggesting some sort of sinister cult-like connection between the next batch of survivors that the group encounters. Oh yeah, it doesn’t take us long to meet Luis’ mother.

Immediately, something doesn’t feel right with the group’s new destination too, as they pull in to the island settlement, drop their weapons at the door, and find a pretty comfortable, hospitable location. The kids don’t seem bothered, especially since Alicia re-discovers TV, albeit very old TV that she doesn’t recognize, and Nick quickly befriends the settlement’s apparent leader, Celia, who is also mentioned in a cold open that sees a bunch of church patrons poisoned, as Strand’s boyfriend, Thomas arrives too late to witness the mass murder. Well, that’s certainly suspicious.

Speaking of Strand, this is the happiest that the show has ever portrayed him, as he’s finally reunited with a dying Thomas. This provided a nice and bittersweet reunion between these star-crossed lovers, and when Celia talks about Strand joining Thomas in the afterlife, it really looks like he’s going to do it, by taking one of the poisoned hosts that were given out at the church. This makes a promise that Thomas forces Madison to make, promising that she’ll look after Strand after Thomas dies, feel all the more emotional, since it feels like Strand will spare Madison the effort right off the bat. Of course, by the end though, it’s moot, since Strand goes back to being Strand, and simply shoots Thomas in the head after he dies, which closes out the episode, confirming that Strand has no intention of joining his boyfriend in the afterlife. As much as it’s appreciated to show a different side of Strand, it’s also a good thing that his character didn’t completely come apart here, especially since he’s one of this show’s best characters so far.

On the other side of the spectrum, Chris starts to unravel, and even comes off as being borderline mentally ill, as if he’s somehow cracking under the atmosphere of the Walker apocalypse. As much as one can’t blame him for that, this ends up endangering Madison, when Chris simply watches as she’s about to be eaten by a Walker, forcing Alicia to intervene and save her mother. Later in the episode, Chris holds a knife over Madison and Alicia in bed as well, looking as if he’s about to kill them, though the two are woken up by Strand shooting the dead Thomas, and this has them screaming Chris out of the room. Chris becoming a little more unhinged is a pretty good turn, though I’m slightly suspicious that the show won’t go all the way with this development. Still, it might help Travis more consistently spine up towards the end of the season, if he’s forced to put down his son for being deranged, just as he had to put down his wife before she turned at the end of Season One.

The less successful elements of the episode largely came from Celia and the whole buildup to something that likely won’t be explored until much later in the year, since Fear the Walking Dead only has one episode to go before it goes off the air for months. Celia is an initially interesting character, especially when she starts fostering a strange kinship with Nick, but before long, she starts degrading into a recycled idea for this universe. She basically serves as a more matron-like blend of Hershel Greene and The Governor, right down to the whole idea of not wanting to kill Walkers, since the dead just walk among the living now, according to her. 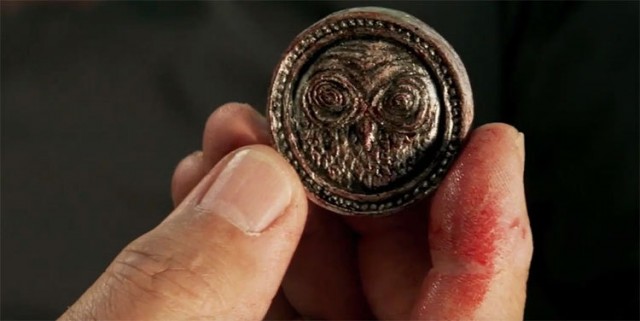 Surely, Celia must have noticed that the Walkers try to eat you alive without any other thought or instinct. Even with Hershel, way back in Season Two of the main The Walking Dead series (which, as we know, was not one of the show’s better seasons), it’s hard to believe that the person could just round up a bunch of Walkers without incident, and not suffer a single fatality or other such scare. At least Hershel provided some strain or regret to this effect too. Celia talks about hoarding Walkers (and feeding them puppies of all things!), with all of the tribulation of walking to fetch your mail. Seriously? That doesn’t make her very believable, even by the standards of these shows.

As much as some of the emotional material with Strand and Chris was interesting, and Daniel’s perpetual distrust ended up paying off in satisfying ways, the dogged pacing and ho-hum new antagonist somewhat dragged down this week’s episode in the end, despite it being an improvement over last week. “Sicut Cervus” at least got everyone off of The Abigail, but with just one episode left before the lengthy midseason hiatus, I’m not sure how the show is going to keep this new setting all that interesting or distinct from the main The Walking Dead series in the season’s front half. One of the major Achilles’ heels of Fear the Walking Dead as a whole is that the main The Walking Dead series has already firmly established for years that nobody in this universe can be trusted. Taking that into consideration, it’s hard to be all that shocked that yet another community leader didn’t turn out to be fully on the level.

Fear the Walking Dead 2.6: "Sicut Cervus" Review
Fear the Walking Dead improved a bit this week, as the survivors are brought to an interesting new setting, albeit one that quickly devolves into the same old song and dance for this universe.
THE GOOD STUFF
THE NOT-SO-GOOD STUFF
2016-05-16
77%Overall Score
Reader Rating: (0 Votes)
0%