Game of Thrones took more fantastic strides forward in this week’s episode, “Book of the Stranger”, which moved almost every lead character into more exciting new territory! Arya and Bran were absent this week, but that’s fine, since this episode was particularly puncutated by the long-awaited reunion between some of the Stark siblings, namely Sansa and Jon, as Sansa’s party finally successfully makes it to Castle Black!

The interactions between Sansa and Jon really highlighted how both of these characters were forced to mature since the show’s first season, even cutely referencing their child-like shortcomings back at Winterfell. Sansa never seemed to like Jon much, but now that she’s forced to depend on him, it’s amazing to see just how much even these two strained siblings truly love each other, and have faith in each other to take back the North. Edd isn’t exactly thrilled about Jon going back to take the fight directly to Ramsay, which Sansa manages to convince him to do, especially after a rather colourful letter from Ramsay reaches Jon at The Wall, but this threat pretty much forces Jon to take up the fight. Sansa even reasonably suggests that Jon’s resignation from the Night’s Watch will be able to pave the way for a uniting of Northern Houses against Ramsay. 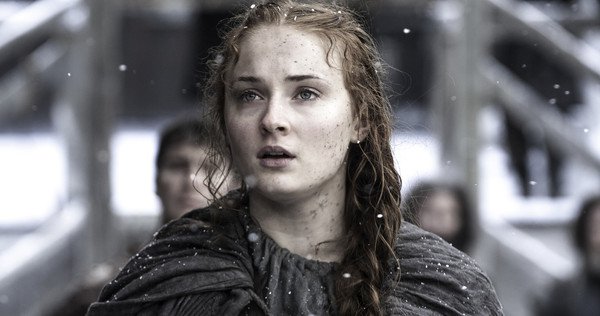 Every scene at Castle Black was fantastic this week, especially since Edd isn’t wrong when he points out that the Stark siblings’ war against Ramsay will leave the world of men largely undefended from the inevitable coming of the White Walkers. Referencing the siege of Hardhome really made sense here, and with Jon making up his mind and fully joining with Sansa and her group, it will be interesting to see whether this proves to be the right decision, or whether the fight against Ramsay, as much of an asshole as he is, will do more harm than good, especially after Stannis’ own failed march against Roose. Speaking of, Brienne had a pretty badass scene to that effect, when she proudly tells Ser Davos and Melisandre that she was the one who killed Stannis, and that she will not forgive or forget the two having a hand in the blood magic that killed Renly. Since Jon is joining with Sansa, Davos and Melisandre will likely follow in Jon’s footsteps as well (hell, Melisandre definitely will), and that leaves The Wall even more short-handed, though this also creates a chance for Jon to enact some desperate measures against Ramsay with his own blood magic, even though us viewers obviously hope that it doesn’t come to that.

Sansa also finds another worthy ally in Littlefinger, who arrives back in the Vale, and meets with Stark cousin, Lord Robin. After pointing out that Lord Royce was the one responsible for selling out Sansa to the Bolton forces, Littlefinger manipulates Robin into deliberating Royce’s execution before pardoning him, thus forcing Royce into the debt of his lord and Littlefinger. What better opportunity to present the obvious demand of rallying the Vale’s soldiers to help fight for Sansa?! Littlefinger likely has his own agenda, but even so, this turn is no doubt a blessing for the mobilizing Stark siblings, especially since Tormund admits that Ramsay’s forces outnumber even the Wildlings. The Vale’s soldiers are probably the best way to give them a fighting chance in the battle for the North, and hopefully, the price that Littlefinger may demand afterward isn’t too heavy.

King’s Landing also got quite a lot of focus this week, as we finally check in with Margaery, four episodes into Season Six, who is being brought before the High Sparrow at last. The High Sparrow continues to be a very interesting and morally ambiguous antagonist, as he recounts a backstory of being a formerly well-off cobbler, who simply discovered a higher truth among the poor citizens of the world. In a moment of mercy, Margaery is also allowed to see Loras as well, who is starting to break under his own torture, which seemingly has Margaery ready to take her own walk of atonement, as Cersei did at the end of Season Five.

Obviously, the current queen undertaking such a humiliation will not stand, though as you can imagine, Tommen doesn’t have the spine to do much about it. In a very strange twist, Cersei becomes very easy to sympathize with this week, as she pressures the Small Council to override Tommen’s command of not provoking the High Sparrow, and claims that when Tommen has Margaery back, following the battle, he will forgive the violence. That’s got to be a pretty questionable call from a legal standpoint, but honestly, in a rare moment for Cersei, she’s doing what needs to be done for the good of the city. Sure, she probably is motivated by some degree of self-interest, given that she probably wants to bury a knife in the High Sparrow’s heart after her own walk of atonement at the end of last season, but this episode did a great job of illustrating how Cersei is sometimes the lesser evil in King’s Landing. That’s never a good place for the city to be in, but perhaps that helps to explain why no one has murdered Cersei yet, even six seasons in, and after a death prophecy.

Tyrion’s storyline also improved this week, nicely contrasting with Cersei’s, as he suggests bringing the Slave Masters to the negotiating table, which naturally doesn’t sit well with most of Meereen, including Grey Worm and Missandei. Tyrion does make his case however, eventually leading to the Masters agreeing to try and abolish slavery in seven years’ time. That’s definitely the long game, and seems to confirm that we’ll never totally see Slavers’ Bay stop earning its name over the course of this series, but as Cersei must do what’s necessary and fight, Tyrion must do what’s necessary in stopping the fighting and finding a compromise. As different as they are, the Lannister siblings are two sides of an important coin, and both are very good at what they do. Say what you will about them, but they’ve rarely made the city they’re in worse, despite their House’s frequent atrocities.

There were also more upsets in the North this week, as Theon returns and reunites with Yara, who accuses him of being an opportunist and abandoning her during the disastrous battle at the Dreadfort during Season Four. Yara obviously has no idea what Theon has been through, but Theon nonetheless pledges loyalty to her at the Kingsmoot, which continues to move the Iron Islands to a united front, in turn putting Ramsay in an even more difficult position. Of course, you wouldn’t know that quite yet, as Ramsay is having a grand old time writing violent letters for Jon, and even gets a rather sultry visit from Osha, who believes that she can seduce him and then kill him. Osha obviously doesn’t know who she’s dealing with however, and Ramsay quickly overpowers her and knifes her in the throat, leaving her to bleed out on his floor! As if it’s not clear already, Ramsay is a very dangerous man that is not to be trifled with, and with Osha now dead, Rickon is officially out of allies, at least until Jon and Sansa manage to ride back to Winterfell, which will likely take quite some time.

In an episode that was full of standout material though, no sequence stood quite as tall as Daenerys’ plot in Vaes Dothrak, which was arguably the best storyline this week. Daario and Jorah manage to reach Daenerys as the Khalasar prepares to decide what to do with her. Daario even learns of Jorah’s Greyscale infection, but there’s no time to dwell on it, as the two manage to sneak into the city, and, after having to kill a couple of Bloodriders, they manage to locate Daenerys!… Who, amazingly, does not want to be rescued!

Instead, Daenerys has her own plan, befriending one of the younger Dosh Khaleen, who agrees to the unorthodox strategy of locking her in the chamber as the Khalasar threatens to gang-rape Daenerys for her defiance and declaration that she will rule Vaes Dothrak, due to the current leaders’ own lack of ambition. Daenerys however says that the Khals will not serve her, and they will die instead, before she pushes over the torches and burns the entire chamber down, killing everyone inside! As the episode ends, Daenerys emerges, naked and unburnt (I guess Emilia Clarke has briefly changed her mind about no longer doing nude scenes), and everyone in the city, including Daario and Jorah, bow to her. This was an unbelievably awesome moment, and reminds everyone of just how fierce and resourceful Daenerys can be, even in a hopeless situation. She doesn’t need anyone to rescue her. She’s the Mother of Dragons, and Vaes Dothrak now knows that, just as Meereen learned it!

Game of Thrones continues to perform excellently in its latest episode, and continues to work just as well with no source novels to adapt. “Book of the Stranger” was a particularly fantastic episode with no clear storytelling weaknesses, even elevating the lesser arcs from last week, and making sure to end every story development with a pretty considerable bang, or at the very least an exciting and challenging shift in characterization. Things are really heating up in the North especially, though Vaes Dothrak also got some scorching new leadership, creating another powerful force to battle for the Iron Throne soon. The show definitely has an overall sense of moving towards a thrilling climax now, and here’s hoping that it has no intention of slowing down in the episodes to come!

Game of Thrones 6.4: "Book of the Stranger" Review
Game of Thrones continues to dominate even without source text in its latest episode, as every character arc got standout story material this week, particularly as the coming wars begin to heat up!
THE GOOD STUFF
2016-05-16
95%Overall Score
Reader Rating: (0 Votes)
0%