Silicon Valley settled into a more mellow groove this week, and even gave the guys a rare, consistent win in their latest corporate shenanigans. “Malleant Data Systems Solutions” nonetheless ended up being a slight step down from Season Three’s very impressive former episodes so far, but it was still a good episode overall, and one that continued to have the season moving in a very interesting direction.

The biggest surprise in this episode was the point where an accidental success by Gilfoyle spurs Richard and Dinesh to put more effort into building the box for Jack Barker. Richard even makes a big fuss about doing as little work as possible on the box beforehand, especially after he nearly escapes being fired by Barker, after the guys’ Skunkworks plot was discovered at the end of the previous episode. Predictably, there wasn’t much in the way of consequences for the guys’ illegal actions, since Richard points out that Barker can’t fire the guys, because he promised a box to buyers that he could no longer make in that case, so Barker is basically forced to let the whole thing go. It’s crafty on the part of Richard, even if it does feel like kind of an easy resolution to the Skunkworks screw-up.

The scenes of Richard, Dinesh and Gilfoyle really going hard at building a surprisingly great box were pretty clever though, especially when Richard must fend off an annoying aesthetic designer who keeps coming to him with seemingly irrelevant opinions on which form the box should take. The aesthetic jokes about the box were a little hit-or-miss, but Gilfoyle’s biting commentary on Dinesh, and the guys basically sticking it to Barker in doing the exact opposite of what they said they would do, generally worked a lot better in terms of laughs.

Unfortunately, Barker’s original buyer falls through, since they believe that another company has a superior product, though this ends up being a non-issue, since Richard just fesses up about how much faster and more powerful their box is, essentially making that part of the story pointless. Well, what’s the point of even bringing up that snag then? The result is the same, as the board of Pied Piper convenes to talk about a deal with the other company, whose lengthy name is referenced in the episode’s title.

Apparently, Barker has put together an underhanded deal that would undermine Richard’s integrated platform for the sake of more short-term cash, forcing Laurie’s hand in voting for his work with the other company, despite Erlich voting against the deal, simply because he wasn’t CC’d in the E-mail putting together the meeting. Monica also votes against the deal, keeping her word from when Richard was fired at the end of Season Two, and this leaves a formerly arrogant Barker incurring the wrath of Laurie when the motion is denied, who fires him for disrespecting her and pointing out that he has forced her into a corner. It’s shocking that the show is already dropping Barker before the season even reaches its halfway point, but the episode ending with Laurie revealing that the CEO seat at Pied Piper will be vacant for the foreseeable future is pretty interesting, even if this result still purely represents a win for the guys and their platform ideas!

The main lead seeing resistance this week was Erlich, who finally gives us a welcome chance to check in with Big Head, now the owner of a massive, upper-tier house that he has started to rent out. The twist that Big Head feels weird about charging rent, due to his enormous cash settlement making him a multi-millionaire, so he takes shares in startups instead, essentially making him accidentally copy Erlich’s business and lifestyle, was pretty hilarious, and represented many of the episode’s best jokes. Things only got funnier when Erlich’s truck breaks down in the driveway after he storms out, forcing him to try and make peace with Big Head by proposing a partnership, which Big Head agrees to, since he’s not entirely sure what Erlich is on about. This hopefully means that we can look forward to more Big Head appearances over the rest of the season, since this character is very funny, and he should only get funnier when he gets into business with one of the show’s other funniest characters! 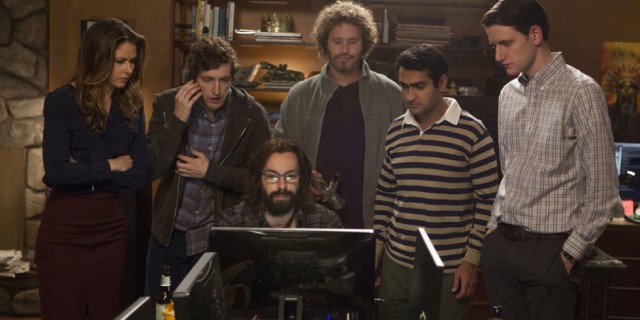 On the weaker end of the episode was Gavin Belson, who had a mostly thankless subplot that simply served to undo another plot development from the start of the season. When Season Three started, End Frame had absorbed a bunch of Nucleus’ best engineers and programmers, but when Gavin learns about this, he simply buys out End Frame, effectively making the whole End Frame arc completely pointless, beyond providing another save for Pied Piper when they’re in a corner. Why even bother having Gavin shut down Nucleus then? I can understand it as an excuse to put Hooli on a new project, but with the developments at both Pied Piper and Hooli, it feels like the show is trying to go back to the same direction that it started out in. That’s not necessarily ideal, since the bold new developments from Season Three have been pretty solid so far, so it would be disappointing if the show just started undoing most of them in the season’s back half.

Still, “Malleant Data Systems Solutions”, while not quite as good as the other episodes that Season Three of Silicon Valley has delivered so far, was pretty funny, and nicely uplifting. While it’s fun to see the guys constantly bang their heads against the wall with no end of issues, it is satisfying to see them get a big win every now and again, to prevent the series from drifting into depressing territory. You never want things to feel hopeless, and this episode gave some hope to Pied Piper’s founding fathers, though said hope probably shouldn’t come at the expense of the season’s bold new ideas, especially when said ideas have worked pretty well so far.