Take Two Interactive recently released its earnings report, within which it announced that Rockstar Games has been “hard at work” on new games that it will be announcing “soon.”

With E3 2016 right around the corner (less than four weeks, not that we’re counting), it does seem appropriate that the company would announce its new games just before the expo, or even during the event itself. Take Two CEO Strauss Zelnick has already told the public that the company will be at E3 “in a big way.” There have been quite a few signs pointing to a follow-up to Red Dead Redemption, and here’s the entire list of why we think the game will be announced sooner rather than later.

Not “new IP”. Typically, when a developer or publisher has something brand new in the works, even before it is announced, they tell the world they’re going to announce their “new IP.” This isn’t the case here. Take Two has said that Rockstar is working on some games, and while we can’t know for sure, an earnings report would be the appropriate place to assuage investors that the company is also working on something new. By not doing so, it virtually guarantees that the new games are pre-existing franchises of some kind.

In fact, later in the earnings call, Take Two said that it has games being worked on that are new IP to further diversify its portfolio, showing that the company is very much willing to say that it is working on some new properties, but that Rockstar is likely not straying from its tried and true franchises just yet. 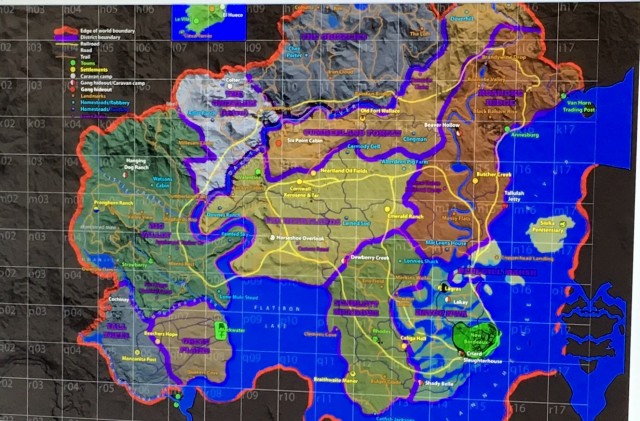 That map leak. While its authenticity still hasn’t been 100% verified, a map purported to be from the sequel/prequel, potentially) to Red Dead Redemption leaked a month ago, showing off a larger play area than the first game. The map, roughly 150% the size of the original, has even been recreated by fans to better highlight key areas. With the amount of detail that is in the map, it’s hard to imagine that the leak isn’t real, though we’ve seen some pretty good fakes before.

Red Dead Retribution. As much as we consider games that come out after each other to be sequels, lots of talk has floated around about the game being a prequel to Red Dead Redemption. As such, it makes sense that the game would be called Red Dead Retribution, with the game set in the past (relative to Redemption), as we see John Marston with an even shadier and more troubled past getting revenge on others for something in his childhood, for example. Follow this up in Red Dead Redemption with John stealing from the rich to give to the poor as a way to change himself, and the storyline may connect better than gamers expect. Of course, this is rampant speculation.

Rockstar’s website updates. Looking closely at Rockstar Games’ website doesn’t reveal much information, but it does appear that we can glean something from the specific page for Red Dead Redemption. Within the mini-site’s news section, Rockstar has been updating its blog with fan art and other content regularly, with three updates in 2016 so far.

To contrast, the sites for LA Noire and Max Payne, both newer games, saw their latest updates in December of last year, and that was simply to announce a developer-wide sale on all Rockstar Games. Before that, their sites were updated in June and August, respectively. It’s interesting to see that Rockstar has recently begun posting more in the section of a 2010 game compared to games that launched in 2011 and 2012.

Not until it’s ready. Rockstar Games doesn’t tend to follow any sort of release schedule, the studio very much adopting a mantra of “it’s released when it’s done.” Take Two announced that Rockstar isn’t planning on releasing any new games in this fiscal year, which ends March 31, 2017. Unlike Fallout developer Bethesda who surprised everyone with a five-month announcement-to-release timeframe with its latest title, Fallout 4, we expect Rockstar to announce its latest Red Dead title and keep working on it for at least another year before it is released. Expect a Holiday 2017 or Spring 2018 release date for this one. The Fallout strategy just isn’t Rockstar’s game, pardon the pun.

This isn’t real, but we can dream.

Time for a remaster. With a new Red Dead game not likely coming until late-2017, there is plenty of time for gamers to replay the original game, and what better way for Rockstar and Take Two to get a little seed money for their new project than by re-releasing a remastered version of Red Dead Redemption, updated for Xbox One and PlayStation 4? We’re not asking for Oculus Rift or PlayStation VR support or anything, but giving Redemption the next-gen treatment will make a world of difference on a six year-old game and give those who haven’t played it yet the opportunity to understand its world before the new entry in the series is released.

We know as much as the next guy; that is to say, not much. Rockstar Games and Take Two are always cagey about responding to media because they like playing their cards close to their chest. And with good reason; surprising and delighting gamers is the way they make the splash that they do. The signs we’ve noticed–as many others have, too–are just whetting our appetite for what we expect to be a huge announcement from Rockstar at E3 2016.