Yikes. That’s all that can be said about, “Schism”, the rather unfortunate Season Four finale of Arrow. Obviously, that’s not enough to sustain a review, but if this season finale proved one thing, it’s how much this show started really backing itself into a corner with its magical elements and nuclear endgame. Clearly, Arrow was biting off more than it could chew with these plot turns, to the point where it started moving too far away from the gritty, street-level darkness that the show originally founded itself on.

There have been good elements to the more light-hearted direction of Season Four, which has helped chart interesting new territory for the show, and avoid it getting too far lost in the same old melodramatic rut. Unfortunately, the lighter elements have also blown the scale of Arrow up larger than it can properly sustain, and that resulted in a season finale that felt insane for all of the wrong reasons, despite all of its attempts at urgency and thrills. 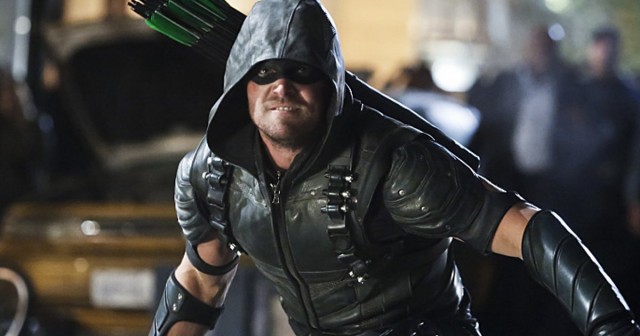 A big problem with this story resolution is that, after absorbing the energy from the deaths at Havenrock especially, Damien Darhk’s powers have grown out of control, and no longer have any logic or rules. Darhk’s power is basically just doing whatever the plot demands at this point, to the point where he’s using his mind to sense when someone isn’t typing at a keyboard, then moves a bullet lodged in them, even when his powers are supposed to be compromised, and kills the guy. Ok, to be specific, it’s Cooper, but nobody cares about Cooper. The bottom line is, why the hell is Darhk basically omnipotent now? The show implied that his abilities only work at close range, and I suppose that the Havenrock deaths could have increased that range a bit, but would it really increase them to the other side of Star City, especially when his idol is a fair distance away? Moreover, Darhk never had any people-sensing powers before now, so where did that come from? That’s just lazy writing.

It’s painfully clear that this season didn’t have an exit strategy, and that’s constantly evident with the very annoying array of quick, contrived fixes to the various problems that have come up in recent episodes. Even when tens of thousands of nukes are in the sky, and one is minutes away from Star City, Felicity just hacks them away. Yes, Felicity hacks away active warheads, sending literally all of the world’s nukes into space to detonate harmlessly, and leaving the entire world without a nuclear stockpile. Even for the DC Universe, that is completely ludicrous! That’s literally the resolution behind Superman IV: The Quest for Peace, arguably one of the worst creations with DC branding in any medium! Robot Chicken’s DC-themed skits would shy away from that solution for being too silly! Seeing Arrow, the most dark and grounded of the DC shows on The CW, seriously present that as a story resolution is just embarrassing.

That’s not the only big issue with the story either. Oliver gives a speech to rally the people of Star City during their looting spree to fight alongside him, which is kind of cheesy and cliched for superhero media, but whatever, it sets the stage for a final battle with the Ghosts and Damien Darhk. Conveniently, the positive energy of the people also overrides Darhk’s magic, though at least the show did foreshadow this limitation behind Darhk’s sorcery in a prior episode. It’s still lame, but at least it didn’t come out of nowhere. Everyone joins in the fun, even Lance, Lyla and Diggle, and there’s just a big old street fight to complement Oliver squaring off with Darhk. It’s rather ridiculous, but there is a small air of satisfaction to seeing Star City finally properly stand up to the outlandish threats that constantly face it every May since this show started.

There’s also another semi-interesting idea behind Oliver finally resolving to kill Darhk in the streets, after Darhk tries to provoke Oliver by saying that he let Deathstroke live, despite Deathstroke killing Moira, but Oliver says that he had a choice with Deathstroke, and there is no choice with Darhk. Thus, Oliver stabs Darhk to death with an arrow, and the rest of the Ghosts, and probably H.I.V.E. with them, are presumably wiped out by the townsfolk. Again, it’s rather absurd, even by the standards of the DC Universe, but at least it does dovetail into Oliver being sworn in as acting mayor, which is a satisfying, if predictable outcome. 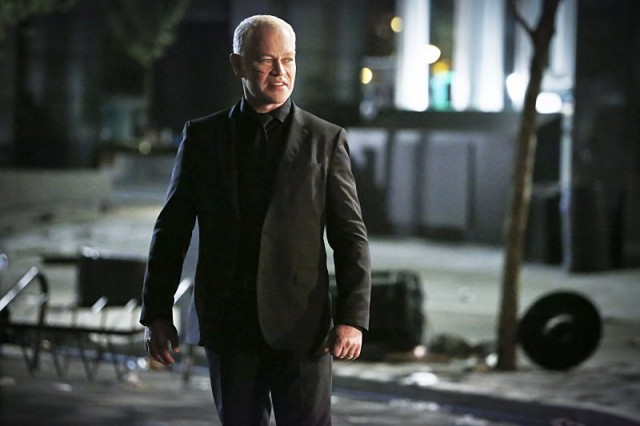 If it seems like this storyline is clumsy and scattered, well, it really is, and there’s no getting around that. The episode tries its best to fill the space with some decent action scenes, and of course the obligatory flashbacks, but it’s very apparent that the show has thrown up its hands and is just trying to do whatever it has to in order to wrap everything up and pave the road for Season Five later this year, as best as it can. This is most noticeable in the flashbacks, which have Reiter and Taiana both going down laughably easily, especially as Oliver is inevitably forced to kill Taiana himself, which initially upsets the other prisoners, until they just kind of get over it. Then Oliver is called back by Amanda Waller, says he’s going to wander somewhere else, because he has a promise to keep (presumably to Taiana), and that’s where we end the flashback material for this season. That’s it? Oh well. The flashbacks will likely end after next season, which feels merciful at this point, since the idea really seems to have run its course, and the flashbacks are now contributing nothing but interrupting the flow of the story now.

Worst of all is that this season finale fails to generate any kind of excitement for next season. Oliver becoming mayor of Star City at last is pretty cool, especially for fans of DC Comics that saw Oliver take up the same duties at one point in the printed panels, but this was a predictable outcome, like I said. Diggle and Thea both leave around the same time for rather flimsy reasons, in order to create an excuse for Arrow’s stopped canon over the next five months or so, and Lance similarly decides to go off somewhere with Donna. Oliver and Felicity then just look at the costumes in their broken-down lair, which the Ghosts previously ripped apart in another filler action scene, and that’s where the episode ends. Beyond Oliver becoming mayor, that feels like a disappointingly grim note to end things on. The idea behind the righteous kill doesn’t even go anywhere either, simply having Oliver brood over Laurel’s grave some more, before deciding that he’s going to quite literally stare at the wall with Felicity. What kind of ending is this? It just stinks of forcing an excuse to separate the characters for several months off-screen, only to inevitably bring them back together later when Season Five starts.

Arrow made a few key improvements over its similarly uneven third season in Season Four, but, “Schism” is yet another season finale that really has the show face-planting at the finish line again, just like last year. Like Season Three’s disappointing finale, Arrow became too contrived, illogical and tedious to watch here, when it should have been at its most exciting and unpredictable. That’s really frustrating, but perhaps this episode will serve as a cautionary tale for letting Arrow’s scale balloon too much. This is supposed to be a show about shady, street-level dealings and dark, personal demons. Maybe next season, the show should hold the nukes and the magic, or at least come up with a better resolution than the sorry sight that Arrow spat up here.

Arrow 4.23: "Schism" Review
Arrow unfortunately face-plants pretty hard at the finish line with an inconceivably sloppy season finale this week, which unceremoniously wraps up the lingering storylines and thanklessly leaves everything hanging before next season.
THE GOOD STUFF
THE NOT-SO-GOOD STUFF
2016-05-26
53%Overall Score
Reader Rating: (0 Votes)
0%