Less than devout moviegoers might not immediately know the name of Shane Black, but he definitely serves as an important creative force in modern Hollywood. Black was one of the first individuals to begin revitalizing the career of Robert Downey Jr., for starters, since Downey helped to spearhead one of Black’s particular favourite writing and directing efforts, 2005’s Kiss Kiss Bang Bang, leading to Downey being noticed for 2008’s Iron Man and reclaiming his Hollywood throne as a superstar. Fittingly, Black also directed Downey in Marvel Studios blockbuster, Iron Man 3, which is probably where audiences would most likely recognize his work.

If Black has a particular specialty, it’s comedic-minded neo-noir mystery thrillers. It sounds dry, but Black’s movies are anything but. In terms of these bold neo-noir-minded visions, you could essentially think of Black as the American version of Guy Ritchie. Whether you loved or hated Iron Man 3 for example, there’s no denying that it’s memorable, and boasted a very unique vision. Black is finally following up that lucrative, but controversial Marvel Studios effort at last too, with his newest pet project, The Nice Guys having now hit theatres.

There’s definitely some noticeable similarities between The Nice Guys and Kiss Kiss Bang Bang, which both blend a sense of mystery with a sense of cheeky humour. The Nice Guys however is definitely its own independent work, taking place in the glitzy era of 1977, though in true Shane Black fashion, this movie’s mystery is anything but classy. What it is however is loads of fun, with The Nice Guys standing alongside the competing Neighbors 2: Sorority Rising as one of 2016’s best dark horse comedies so far, strangely spoiling us with two hilarious surprise hits in the same weekend. Neighbors 2 is certainly doing better at the box office than The Nice Guys, but this is a movie that definitely shouldn’t be missed by any adult viewer that’s willing to appreciate a great time at the theatre. Everything about The Nice Guys is on-point and stupendously entertaining, and as with Kiss Kiss Bang Bang, this is one hysterical whodunit that you are bound to fondly remember!

The Nice Guys is as much a buddy comedy as it is a neo-noir period mystery comedy, with the movie boasting two distinct protagonists. The first is private investigator, Holland March, played by Ryan Gosling, a single father with a wise-beyond-her-years daughter named Holly (cute), and a little bit of a drinking problem. The second lead character is Jackson Healy, played by Russell Crowe, a collected, highly professional enforcer that is seemingly willing to rough up anyone for the right sum. 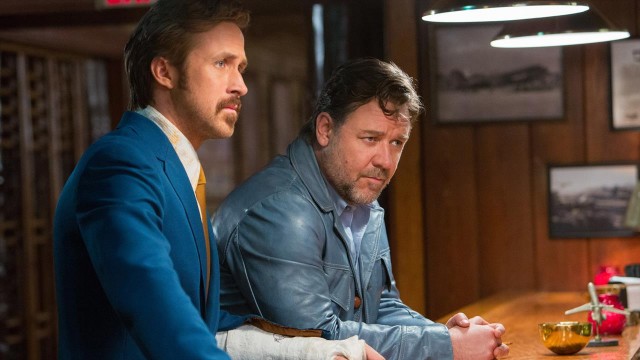 Yes, seriously, this is a buddy comedy that stars Ryan Gosling and Russell Crowe, two actors that are often known for playing very dramatic, brooding parts. It almost feels like an in-joke in and of itself to have Shane Black actually unite two very serious-minded actors in what’s mostly a fairly silly movie. Amazingly though, it really works. I can say without exaggeration that The Nice Guys represents the very funniest that these two actors have ever been, with both excellently rising to the occasion of capitalizing on a whip-smart script and sublimely-tuned direction, to create two compelling, intelligent personalities that work as a very unlikely pair. If you feel like the buddy comedy subgenre has run out of ideas, you especially owe it to yourself to check out The Nice Guys, because Gosling and Crowe both bring the laughs relentlessly here!

A big reason why Gosling and Crowe’s frequent humour works very well too is that neither Mason nor Healy are stupid characters. Both of them are experts in their fields, despite their pretty amusing personal flaws. Yes, they clash, but they also prove to be a mostly competent team of investigators, even though only Mason is actually certified to be a P.I. Mason gets a little out of his element once things inevitably turn violent in their investigation, just as Healy finds himself struggling to deal with people at times, but that’s about the closest that these two come to actual incompetence. The fact that Mason and Healy manage to hold their own in moving through the movie’s mystery keeps The Nice Guys strongly focused and moving forward, without feeling like the plot is contriving reasons to prolong itself. It’s all just very perfectly-calculated, and yet, it doesn’t feel that way, considering how easily and effortlessly Gosling’s and Crowe’s performances flow, despite both being in a light-hearted genre that neither actor generally touches with a ten-foot pole. 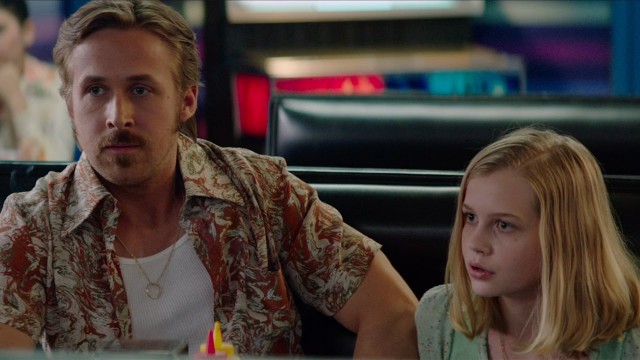 The supporting cast throughout The Nice Guys is also excellent, though I unfortunately can’t divulge much about them without spoilers. The Nice Guys is one of those movies that you want to know as little about as possible before going into it, since this is a movie that’s packed with fun surprises, and very amusing character work. You’ll see some familiar faces in the production, namely Keith David as one of the villains and Kim Basinger as someone with a surprising connection to the case that Mason and Healy are investigating, but the rest is best left for moviegoers to discover. Moviegoers will love discovering it too, as the tangled web of deceit, debauchery and destruction only becomes more entertaining with each passing minute!

Like I said, The Nice Guys is a movie that benefits from viewers knowing as little as possible about it when they first watch it. All you need to know about the movie is that it’s a cheeky whodunit taking place in 1977, with the overarching mystery involving a porn star that turns up dead in an apparent suicide, though when one of the victim’s family members bugs private eye, Holland Mason to poke into the affair further, Mason gets a lot more than he bargained for, especially when he ends up teaming up with an enforcer that formerly laid into him for investigating that very mystery. 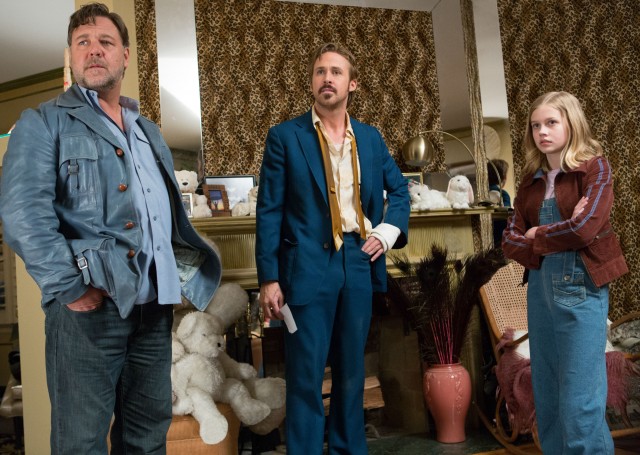 The mystery in The Nice Guys is very well-done too, being constantly unpredictable, and consistently slipping in tiny nuggets and clues throughout the runtime that will definitely reward repeat viewings. As much as The Nice Guys can get comically outlandish, it’s definitely not a stupid movie, with a very sharp wit placed throughout the plot, making the movie succeed as both a murder mystery and a laugh-out-loud comedy. Most of all, it’s a movie that feels very memorable and fun for adult viewers, especially those who are old enough to adequately appreciate the incredible amount of sleazy detail that’s been put into the period setting. The sublime vision does come apart a wee bit in the slightly clumsy ending, but by then, viewers will likely be far too enormously satisfied to truly care.

Shane Black both writes and directs The Nice Guys, along with his other best-known works (he received some writing help from Anthony Bagarozzi as well in this case), and in working off of his own script, Black is really able to pull off some fantastic direction here. As much as Gosling and Crowe make the movie soar at every turn, Black’s direction is also a big part of why The Nice Guys is as great as it is. There’s lots of subtle, unexpected wit to the humour, just like the careful crafting of the mystery is something that Black captures very well between scenes. His smart script will constantly keep audiences guessing, even when it just as easily lends itself to the improbable and the absurd. 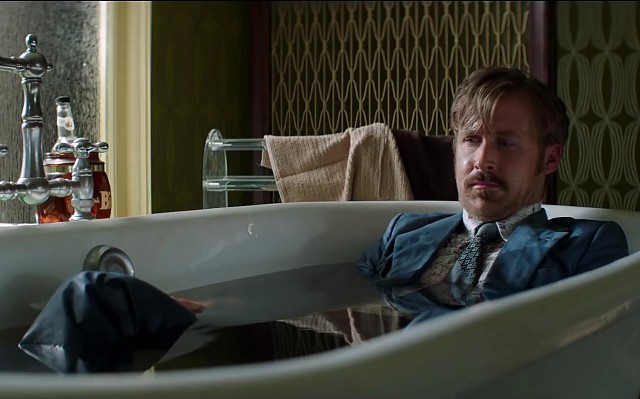 While the mystery is definitely absurd as well, the final product of The Nice Guys still feels very clever and satisfying overall. The movie offers an old-school Hollywood charm to the humour, though one that is so potent that even young adults will easily find it to be very funny. The laughs aren’t always gut-busting, but it’s difficult to watch The Nice Guys without a big, constant smile on your face nonetheless, since everything is just so on-point. Black consistently allows Gosling and Crowe to land even the most ambitious of jokes, yet he also perfectly captures an outstanding sense of period detail in the overall mystery and atmosphere, immersing audiences in the ridiculous vision of it all with aplomb, and fully investing them in a mystery that, while frequently silly, is also positively captivating.

There’s a lot to say about The Nice Guys, but sadly, most of it relates to things that really should be discovered by going to see the movie yourself. Still, I can’t stress enough just how good this movie is! The Nice Guys is very ridiculous, but also very clever and engrossing, being a sleazy, but pleasurable dive into an era gone by, and an amusing look at some of the very worst of it.

Both the mystery and the comedy in The Nice Guys are realized nigh on flawlessly, and the fact that it was all put together on the backs of two actors that are best known for brooding dramas is all the more unlikely and impressive. Everything about this movie is just so entertaining and so satisfyingly witty, and this movie is likely to be one of 2016’s best under-the-radar hits. As much as it’s stashed within a crowded lineup of higher-billed early Summer movies like Captain America: Civil War, Neighbors 2: Sorority Rising, The Angry Birds Movie, X-Men: Apocalypse and Alice: Through the Looking Glass, anyone who loves great, highly entertaining movies should definitely make it a priority to check out The Nice Guys. They may not look like much compared to the competition, but you’ll be very glad you took the time to meet these guys!

The Nice Guys Review
The Nice Guys blends a very smart mystery with some very potent comedy, leading to what will definitely be one of 2016's best underdog hits at the movies!
CHARACTERS95%
PLOT90%
DIRECTION95%
THE GOOD STUFF
THE NOT-SO-GOOD STUFF
2016-05-27
93%Overall Score
Reader Rating: (0 Votes)
0%