Game of Thrones seemed to slow down a bit this week, hitting a more relaxed middle stretch in Season Six, and taking the time to set up big developments to come in the season’s back half of episodes. “Blood of My Blood” was a bit less exciting than most of Season Six’s prior episodes, beyond a handful of big highlight moments, but the teases for later will still make the episode very entertaining for fans.

Things kick off with Sam and Gilly finally reaching Horn Hill, and getting a rather unwelcome reception from Sam’s father, Randyll, who doesn’t take kindly to Gilly being a Wildling. Despite Sam’s mother and sister being warm and friendly, even giving Gilly a dress to be presentable at dinner, Sam’s father openly berates him in front of the entire dinner table, calling him a fat, soft disappointment. This interesting peek into Sam’s personal family life, before joining the Night’s Watch, made for one of the episode’s better storylines, and helped to flesh out Sam’s character, beyond his current station in Westeros. The resolution of Sam leaving, taking Gilly, and even pilfering his father’s Valyrian Steel sword was also great, proving Gilly right when she speaks of Sam’s courage and selflessness. Truly, Sam probably deserves that sword a lot more than his father does! 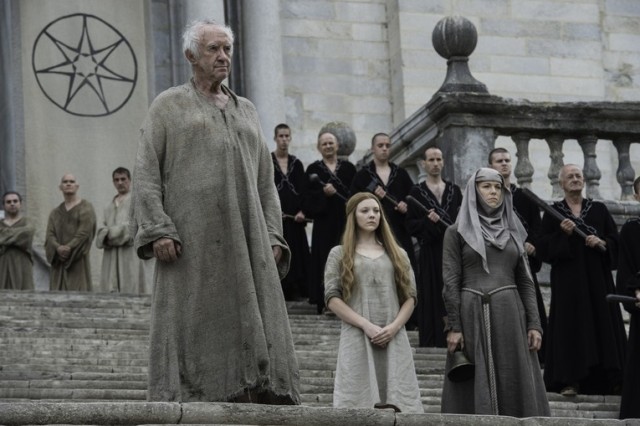 Arya’s storyline also made for some of the episode’s stronger material, as she prepares to go through with poisoning the actress in the plays that she’s been watching. Upon being caught snooping around afterward however, Arya is engaged by the woman, who takes some of Arya’s creative advice, and appears to offer Arya a job as an actress. Arya initially makes an excuse, but soon after prevents the actress from drinking the poison, even fingering the other performer trying to kill her in the process! This naturally upsets The Waif, and Jaqen H’Ghar, who appear to plot Arya’s own death, with Jaqen’s only condition being that she doesn’t suffer. As Jaqen said, Arya gets a second chance, but there will not be a third. Seeing Arya dig out Needle and then sit in a dark cave, seemingly waiting for the coming of Jaqen and The Waif, made for another standout scene, as Arya takes back her independence, even if it means standing against the Many-Faced God.

Fans will yet again be excited about the latest turn in Bran’s storyline as well, as Meera eventually finds that she can’t outrun the White Walkers. Fortunately, a hooded black rider comes to Bran’s and Meera’s rescue, taking them away from the pursuing undead, and getting them a meal and a fire. This is the latest moment of the book divulging into material that’s planned for George R.R. Martin’s forthcoming The Winds of Winter novel, as the masked rider is revealed to be none other than the long-missing Benjen Stark! Even the books hadn’t yet answered the question of Benjen’s whereabouts until this moment, though now, the mystery is revealed. Apparently, Benjen was nearly killed by White Walkers, before being rescued by the Children of the Forest and having his turning stopped with Dragonglass. Now acting on behalf of the late Three-Eyed Raven, Benjen prepares Bran to learn to control his Warging, which he must do before the Night’s King reaches the Southern lands. This big return was probably the best and most exciting moment in this entire episode, even if it means spoiling another The Winds of Winter mystery that original fans of the A Song of Ice and Fire source novels are once again learning on the HBO series first.

Disappointingly though, despite these cool storylines, the King’s Landing material really felt like it dragged this week. There were a couple of solid moments, such as the reunion of Margaery and Tommen, and Jaime rallying the Kingsguard to take on the High Sparrow directly, but almost all of these story elements amounted to nothing. Despite touting Margaery’s own Walk of Atonement over the past couple of episodes, following the highlight moment with Cersei at the end of Season Five, the High Sparrow just makes an excuse, and Margaery gets out of the Walk, simply because she let the High Sparrow recruit Tommen. Uhhh, what? That seems kind of contrived, since it’s hard to believe that Cersei wouldn’t throw someone to the High Sparrow to get out of her own walk of shame last season.

Similarly, the High Sparrow simply declaring that there will be no fight because Tommen has now been recruited to the Order of the Sparrow is frustrating, since the tease of Jaime’s aggression ultimately goes nowhere. It would have been interesting to see civil war truly break out in King’s Landing by having the throne and the Order fully start trading blows with each other, especially due to Jaime’s aggression, but it seems like the show is sweeping that promise away for now. The act of Tommen exiling Jaime is a little more interesting, and mercifully gets Jaime out of King’s Landing after he’s barely done anything beyond waste time there lately, but it still feels like the show isn’t so much providing a twist as finding another excuse to wimp out and prolong the inevitable battle between House Lannister and the Order of the Sparrow.

A return appearance by Walder Frey was also a bit uneven in terms of appeal. The scene itself was pretty good, with Walder being a predictable bastard to his subjects while he hears about The Blackfish taking Riverrun, an off-screen event that was referenced in last week’s episode. The problem is that this scene didn’t really serve any purpose beyond telling viewers what they could have already put together; Walder is probably not happy about losing territory. The return appearance by Edmure Tully, being held as a hostage by Walder, was a neat way to cap off the scene, but as good as this surprise was, this whole story element kind of felt like filler. This is especially true when Sansa, Jon and their company don’t even show up in this episode at all, making the check-in with the Riverlands feel a bit pointless, beyond pointing out the whereabouts of Edmure Tully.

At least the episode’s ending is fairly cool, even if it also doesn’t really tell viewers much that they don’t already know. Daenerys talks to Daario about what kind of resources she’ll need to bring the Khalasar to Westeros, Daario reminds Daenerys that she’s more of a conquerer than a queen, and then Daenerys rides off, comes back on one of her dragons, and makes a speech. It’s a cool speech, but this is yet another instance where the show is clearly spinning its wheels. We already got a scene of Daenerys imposing how badass she is on the Dothraki very recently. Doing a lesser version of the exact same thing just eats up screentime, and the fact that the episode ended on this retread of a development that we already saw is kind of a let-down.

Overall though, “Blood of My Blood” was still damn great television. It was just a tad slow by Game of Thrones standards, especially considering how exciting most of Season Six has been up to this point. Excitement was still had here and there, thankfully, between Arya making an enemy of the House of Black and White, Sam defying his father in a big way, and Jaime preparing to get Bronn and rally a whole bunch of outside support to take back King’s Landing, after some thankless military work, of course. A good chunk of the episode was taken up by filler plots that somewhat had the show going in circles though. Even the big development of Tommen siding with the High Sparrow felt a bit overshadowed by the fact that the scene simply illustrated that the Order of the Sparrow has a very tight grip on King’s Landing… Which we already knew. It’s not uncommon for Game of Thrones to catch its breath a bit around the halfway point of a season, so some of the slower-paced stories are to be expected around now, but what’s also true is that any slower developments now still tend to lead to awesome payoffs later!

Game of Thrones 6.6: "Blood of My Blood" Review
Game of Thrones had a handful of great highlight scenes this week, though also delivered a slightly slower episode that had some storylines spinning their wheels.
THE GOOD STUFF
THE NOT-SO-GOOD STUFF
2016-05-30
83%Overall Score
Reader Rating: (0 Votes)
0%