NOTE: This review may contain mild spoilers for the first season of “Powers.” With that said, the review is written to accommodate those who have not yet seen the series, and as such, will avoid any discussion of major plot developments.

Well, it’s about damn time! After its first season was released in the U.S. and a few other smaller territories during March of last year, Powers was inexplicably withheld from our native Canada, alongside most PAL territories, for over an additional year, with no explanation from Sony. That’s not a good start for Sony’s first PlayStation Original Series, a television show that is exclusively being made available to the PlayStation community, where it’s free to view solely for PlayStation Plus members, at least initially. While the show had a temporary run for everyone on Sony’s Crackle streaming app in the U.S., and eventually came to DVD and Blu-Ray in the U.S., it’s primarily meant to be enjoyed by PlayStation’s premium circles, where you can watch it either from the online version of the PlayStation Store on any internet-enabled device, or directly from your PlayStation 4 or PlayStation 3 console, so long as you have a PlayStation Plus membership, obviously. Otherwise, only the first episode of a given season is free to view for everyone, and the rest must be purchased.

With the initially messy, spotty launch of Powers finally behind us though, the show has finally expanded to Canada and most of the PAL regions, with the entire first season launching to freely view from the PlayStation Store for many other regions beyond the U.S. and the lucky few smaller territories at last, alongside the newly-debuting first three episodes of this year’s second season. That’s great, and finally allows a wider range of nations to get behind Sony’s first proper push into original television content made expressly for their PlayStation ecosystem. The fact that Powers is a superhero-themed show, with superheroes becoming the bread-and-butter of modern television almost as much as they are at the movies these days, is all the better! 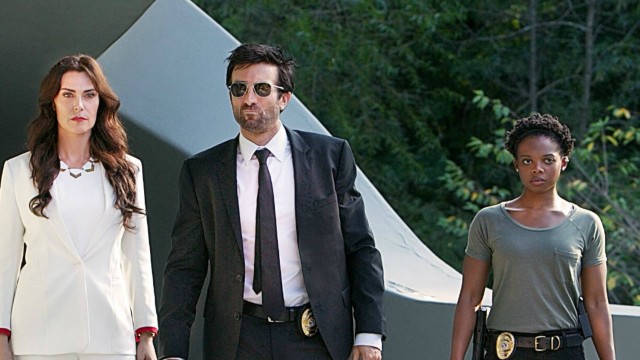 If you’re unfamiliar with Powers, it’s an independent, creator-owned series of graphic novels created by writer, Brian Michael Bendis (who also created the title character of Jessica Jones for Marvel), and artist, Michael Avon Oeming, originally published by Image Comics, and later published by Marvel Comics’ Icon imprint, used for mature-minded graphic novel stories that take place outside of the Marvel Universe, much like DC’s highly popular Vertigo imprint. Powers depicts a world where superheroes live freely among the common population, as celebrities, media icons, and oftentimes nuisances, necessitating the need for a specialized section of local police called the ‘Powers Unit’, designed to keep so-called ‘Powers’ in check, which is this world’s name for people with superpowers. Similar to X-Men, these people’s abilities are innate, unstable, and spawn at random in any potential person’s genetic growth, and that adds an extra fear and unease with some people, even though Powers are mostly celebrated and idolized in this universe, unlike the mutants that are so frequently distrusted, feared and hated in various X-Men media.

The show’s protagonists, Christian Walker, played by Sharlto Copley, and Deena Pilgrim, played by Susan Heyward, are two Powers Unit officers that work in the LAPD’s superhuman control department. An added wrinkle is that Walker used to be a Power himself, a superhero that could fly and empower himself with aerodynamics known as ‘Diamond’, but lost his abilities when he came into contact with the season’s main villain, ‘Big Bad’ Wolfe, played by Eddie Izzard. 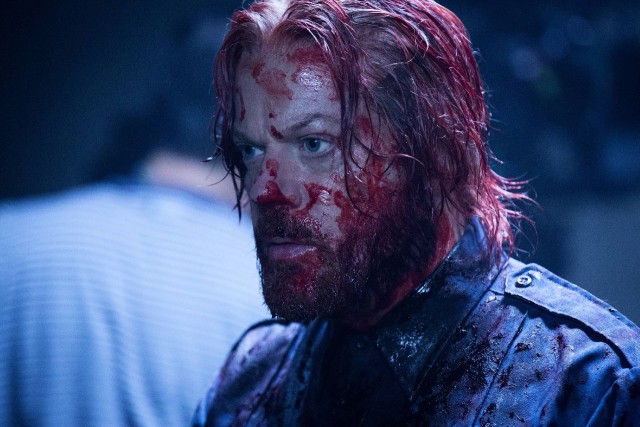 You might scoff at the idea of Izzard, a silly British comedian that is most well-known for cross-dressing stand-up routines, playing a villain on a show as mature and adult-minded as Powers, but surprisingly, Izzard is one of the biggest highlight among a cast that largely consists of lesser-known actors, beyond the fairly recognizable Copley. Izzard’s Wolfe is a terrifying and charismatic presence, a fallen teacher and mentor to Powers who even had his own media circuit, before his abilities drove him to a mass murder that permanently left him chained up in The Shaft, a prison for superhumans. The show initially tries to portray Wolfe as violently devouring his victims, literally shredding through them in fountains of blood and gore, but he also seems to have the ability to absorb powers, run fast, sport super strength, heal injuries, sense people and energy, and do practically anything the plot needs him to. This is a problem, since Wolfe is a great psychological character, but as a super-powered threat, he’s very inconsistent. The show doesn’t quite nail down exactly what Wolfe’s powers are, which makes him feel more like a dangerous plot device than a true villain. Thankfully, Izzard’s great performance still makes the character an excellent and unpredictable threat to Walker especially.

A villain that’s noticeably better realized is Johnny Royalle, played by Noah Taylor, a figure from Walker’s past, who has the ability to teleport and warp people through dimensions, a power that Royalle also uses to creatively and graphically murder people on occasion. The scenes shared between Walker and Royalle are often awesome, as the two are former friends and shaky allies that have now been pitted against each other by standing on opposite sides of the law. The fact that Royalle is so difficult to nail down and catch because of his abilities makes him an even more enjoyable character, with his own sinister link to Wolfe, even if Royalle’s ultimate endgame with Wolfe is a little shaky. 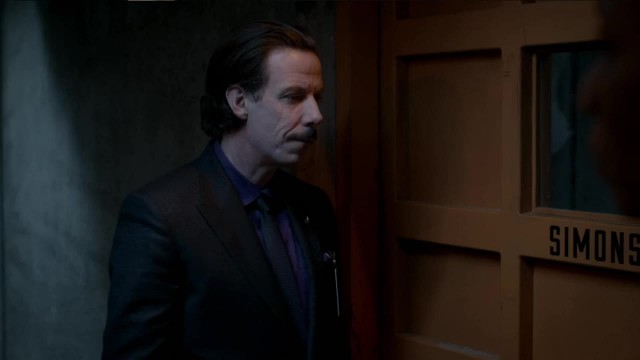 Similarly, Royalle’s presence also ties into a young woman named Calista Secor, who is a big part of this first season. Calista claims to be a Power whose abilities haven’t manifested yet, though she’s merely dismissed as a wannabe. It’s an interesting idea to thicken the plot with Wolfe and Johnny Royalle in concept, but in execution, Calista is too often a nuisance that is used as an excuse to contrive storylines. She feels like a benchwarmer character that doesn’t really come into her own during the first season, even if she’s left to hopefully pursue more promising developments in the second season.

That’s really the problem with Powers; It works as a psychological cop drama, but not so much as an actual superhero story, at least not in its first season. Beyond the frustrating inconsistencies with Wolfe and his abilities, the younger characters that are meant to illustrate the woes of this world’s superhero culture, namely Calista and a young up-and-coming hero character named Zora, just take up space and fail to capitalize on a villain endgame that already doesn’t make a ton of sense. The material with Michelle Forbes’ Retro Girl, an older superhero associate of Walker’s, is a little better, but even with Forbes also being one of the first season’s best actors, it feels like this element of the show doesn’t manage to really fly. The show is awkwardly trying to decide whether it wants to be a dark personal story for its leads, or a superhero-themed commentary on celebrity culture and media hype in this first batch of episodes, and it doesn’t really commit to either, which can really undermine the storylines of several episodes this season. 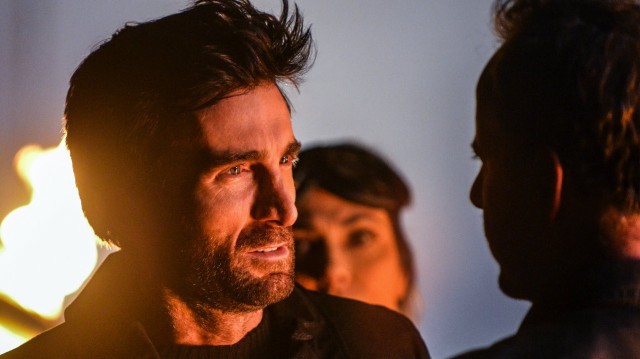 Nonetheless, Powers is at least praiseworthy for its commitment to twisted, gruesome and mature storytelling. This is not a show for kids at all, as the first season is packed with bloody, brutal violence, no shortage of f-bombs and other such foul language, and a solid handful of sexual themes and references for good measure, even if the sexual content is kept surprisingly light, at least in contrast to the seediness of the rest of this season’s episodes. The show takes a handful of noticeable liberties from the graphic novels, as is to be expected, but the new direction for the TV adaptation can sometimes be hit-or-miss, despite its courageous efforts to stay true to the dark, mature storytelling of its source comics.

If you dig superhero media, the Powers comics, and/or dark, memorable stories about a bunch of twisted people, the first season of Powers is worth a quick binge-through, at least if you don’t live in the U.S. and you didn’t get the chance to watch it all already last year. The first season of Powers is a little shaky, and definitely could be improved in some spots, but for the first-ever PlayStation Original Series, it’s not bad, even if it’s not as good as the source comics either. This show probably isn’t a decisive excuse to get a PlayStation Plus membership if you don’t already have one, but if nothing else, it’s proof that a television series designed for a gaming platform definitely isn’t dead-on-arrival.

Powers: Season One Review
Powers' first season is a little uneven, and noticeably inferior to the source comics, but it's a competent first effort for PlayStation's original TV content, especially if you like dark superhero stories.
THE GOOD STUFF
THE NOT-SO-GOOD STUFF
2016-06-01
73%Overall Score
Reader Rating: (0 Votes)
0%