Sega and Atlus have previously confirmed that their highly anticipated RPG sequel, Persona 5 will definitely have a presence at E3 this year, and could make a likely appearance at Sony’s E3 press conference next week too. Ahead of E3 however, Atlus has announced when we can get our hands on Persona 5, and how, though this does come with some bad news for us in the West.

Despite previously attempting a worldwide release for Persona 5, it appears that this plan has now been scrapped, as Western gamers will once again be waiting several additional months for the game after the Japanese launch. Even worse is that Persona 5 has slipped out of this year entirely for us Westerners, and is set for release in North America on February 14th, 2017. For reference, the game launches in Japan on September 15th of this year.

There is some good news however, for fans of Persona that want the most out of the experience. Atlus announced a special collector’s edition of Persona 5 today, called the, “Persona 5: Take Your Heart Edition“, which comes with the game itself, a steelbook case, a 4-inch Morgana plush toy, a 64-page hardcover art book, a full-size replica school bag from the game’s Shujin Academy, a soundtrack CD, and of course, a collectible box. The Persona 5: Take Your Heart Edition is already sold out in pre-orders across several retailers and regions of Canada and the U.S., though for reference, it retails for $89.99 USD/$109.99 CDN, and Canadian outlets especially still have yet to start selling it at several retailers. Keep an eye out if you’re interested! 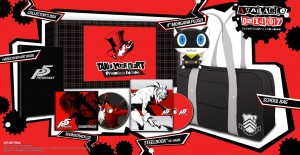 Persona 5 will bring back the combination of social sim and turn-based, dungeon-crawler-style RPG’s in its latest installment, which has players taking control of a new silent protagonist, as he moves to the Syujin High School after being put on probation for assaulting a stalker. The game will involve the player character, along with his allies, forming a group called the, “Phantom Thieves of Hearts”, a squad of vigilantes who aim to liberate the people from their social oppression.

Keep stalking Eggplante for all major news and updates on Persona 5.