Even if Square Enix isn’t hosting another proper press conference at this year’s E3, they still have no shortage of games to showcase at this year’s expo, between Final Fantasy XV, Deus Ex: Mankind Divided, Star Ocean: Integrity and Faithlessness, Final Fantasy XII: The Zodiac Age, I Am Setsuna, Dragon Quest VII: Fragments of the Forgotten Past, and World of Final Fantasy, among others. 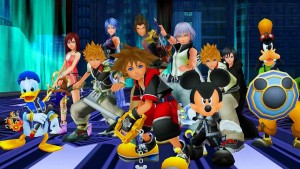 When asked about their highly beloved Disney mash-up action-RPG franchise, Kingdom Hearts however, Square Enix had mixed news. The good news is that Kingdom Hearts 2.8 Final Chapter Prologue, the series’ upcoming remaster package for PlayStation 4, will be part of the company’s E3 lineup, and was even given an official worldwide release window for this December, confirmed in an all-new E3 trailer that released today. The bad news is that Kingdom Hearts III, the series’ long-overdue next proper sequel, is completely skipping E3 this year, and we won’t hear any more about the game until towards the end of 2016.