As promised, Square Enix unveiled a whole ton of info on their upcoming tactical first-person sci-fi action-RPG, Deus Ex: Mankind Divided today, with a series of announcements unfolding during an official livestream on the Deus Ex website. A lengthy demo was also shown, giving fans their biggest leap yet into the world of the game, which also gave developer, Eidos Montreal a chance to tout the game’s many planned features. 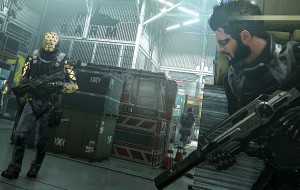 As with its predecessor, Deus Ex: Mankind Divided places players in the role of augmented covert operative, Adam Jensen, now having survived a brutal terrorist attack in Prague, circa 2029. The demo shows the declining demand for human augmentation, in the wake of the events of the series’ previous game, 2011’s Deus Ex: Human Revolution, and how this has forced Jensen to rely on underground, not-technically-legal augmentation work. While this means that Jensen’s augmentations go on the fritz when he’s caught in the terrorist attack, he also has new combat and exploration capabilities, with Eidos Montreal promising that Deus Ex: Mankind Divided will be more tactical than its predecessor, while boasting the same free-roaming gameplay that will allow players to undertake multiple paths and multiple solutions in both main story quests and side quests.

The demo, which showcased the PlayStation 4 build of Deus Ex: Mankind Divided, had Jensen taking on a story mission that had him liberating an ally that owns a book store from a bunch of gangsters that are tearing up the place. The demo showed, even occasionally via split-screen, how players can take multiple paths to the destination, opting to play aggressively, stealthily, strategically, or in a mixed style, depending on the situation. Some of Jensen’s arsenal was shown off, including projectile blades, non-lethal taser guns and projectiles, toxic gas grenades, and smart vision that allows players to track enemies, and any potential loot that they may be carrying. Loot is a big incentive to explore every nook and cranny of the world in Deus Ex: Mankind Divided, and all of it can be used to perfectly customize the player’s experience. It all sounds very promising, and tactical gamers should really be in hog heaven with a game like this! 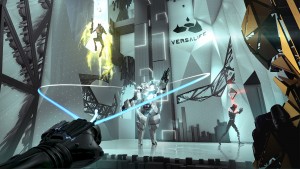 Beyond the impressive-looking demo, Square Enix also announced a brand new game mode for Deus Ex: Mankind Divided, called ‘Breach’, which re-interprets the gameplay in a more arcade-style fashion. Boasting an independent storyline that has players entering cyberspace in an effort to steal corporate secrets that are the key to unraveling a conspiracy, players can take control of a Ripper, a cyberspace operative that can be tasked with manipulating objectives, taking down enemies, or sneaking around security, depending on the mission. Once you’ve secured your data and completed your objectives, you need to high-tail it to an exit, as a whole bunch of security will then come after you! Contrary to the tactical and methodical main gameplay then, Breach seems to place a much higher emphasis on speed and quick thinking, and is more about chasing scores than flexing your brain.

Another wrinkle in Breach is that players will have a ‘Memory Limit’ that forces them to choose any potential augmentations very carefully. Different missions have different challenges, and obviously, different layouts of augmentations will serve you better in certain Breach missions compared to others. You can even compete with friends to try and outdo each other across various challenges, and outperforming the competition will see you earning bonus rewards! Eidos Montreal also promises to constantly be adding to Breach Mode after Deus Ex: Mankind Divided releases to the public, with a series of free updates that will constantly add new levels, challenges and fixes.

Finally, the Deus Ex news was rounded off with Square Enix announcing Deus Ex GO for iOS and Android mobile devices, which is scheduled to release this Summer. Like the previous Hitman GO and Lara Croft GO, Deus Ex GO is a strategy/puzzle hybrid that has players undertaking Deus Ex-style challenges such as sneaking around and taking out foes, outwitting dangerous weapons and technology, and performing other mobile-friendly challenges. If Square Enix’s prior two GO games are any indication, it should be a quality mobile game that Deus Ex fans will have lots of fun with.

Deus Ex: Mankind Divided will release for PlayStation 4, Xbox One and PC on August 23rd of this year.

Keep augmenting Eggplante for all major news and updates on Deus Ex.