UPDATE: Regular Kratos voice actor, TC Carson has confirmed on Twitter that he will not be reprising his role in the upcoming “God of War” sequel/reboot. He cited Sony wanting to go in a different direction with the character in the new game. This seems to further the belief that the new “God of War” game will be less furious and more emotionally grounded than its predecessors.

Sony had no trouble generating buzz at their E3 press conference this year, and they immediately hit the ground running with an intense orchestral intro. That intro soon gave way to a young boy that was preparing to go on a hunt with his father, initially hidden in shadow. There was something unmistakably familiar about the boy however, and as his father stepped out of the shadows, all became clear; An older, more heavily bearded Kratos was the mysterious patriarch, and what we were looking at was an all-new God of War game for PlayStation 4!

As rumoured, the upcoming new God of War game, which is simply titled ‘God of War‘ for now, not ‘God of War IV‘ or anything of that nature, is set amidst the backdrop of Norse mythology, as revealed when Kratos’ rather aggressive parenting methods are interrupted by the attack of a giant troll that speaks of Valhalla. A later scene also reveals that dragons have come to the world of God of War, with the Greek mythology-inspired direction that the series began in now seeming to have firmly fallen alongside Mt. Olympus after the events of 2010’s God of War III.

The demo showed off a sizable expansion to the gameplay fundamentals of God of War. The fast-paced, vicious and blood-soaked combat appears to be maintained in this new PlayStation 4 offering, though now, Kratos appears to be able to develop special skills such as the ability to track prey, which gains EXP as players thoroughly explore their environment. The demo also suggests that Kratos’ son will accompany him on this adventure, similar to Ellie from Sony’s mega-hit exclusive, The Last of Us, and that players must look after the boy as much as they do themselves. The demo’s more emotional, pensive tone also suggests that the series is going for a more deep, thoughtful narrative in this new game, rather than the formerly simple mission of Kratos’ rage both driving and haunting him as he massacres everything in sight. 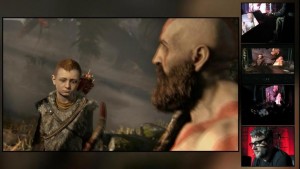 The new God of War game currently has no release window, but is already available for pre-order at some retailers. AMC’s The Walking Dead composer, Bear McCreary is handling the game’s soundtrack, and Sony Santa Monica will stay on as the series’ flagship developer for this new offering. Beyond that though, there are still a lot of questions that surround this new God of War project.

We at Eggplante will keep an eye on developments with this series however, so keep slicing to Eggplante for all major news and updates on God of War.