Bethesda had a busy E3 conference tonight, but with Fallout 4 delighting gamers across the world since it launched last November, Dishonored 2 was instead left to anchor the conference’s big finish. Fortunately, the highly anticipated first-person stealth-action sequel didn’t disappoint, as its first gameplay was showcased, along with the debut of a collector’s edition, and a pretty sizable pre-order incentive! 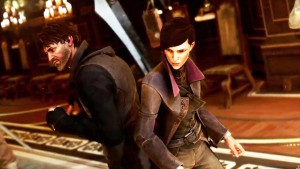 The gameplay showed off a handful of segments in a few missions, with most of the game taking place in the new region of Karnaca as players try to unfold a deadly conspiracy against the crown, even if it still begins and ends in the first game’s familiar setting of Dunwall. Players choose whether to take control of returning protagonist, Corvo Attano, or new Dunwall empress, and Corvo’s daughter, Emily Kaldwin (Corvo is also no longer a silent protagonist, and is fully voiced), with each possessing different abilities. Corvo’s arsenal will be recognizable for fans of the original Dishonored, but Emily’s unique abilities were put to use in a gameplay demo as she navigated the environments of Karnaca. Using her ability, Far Reach, Emily rapidly propels herself through various environments, and can even grapple to hapless enemies and take them out, as well as grab and toss hazards like explosive whale oil barrels! Another power of Emily’s, Shadow Walk, was also shown, which allows her to creepily slink beneath targets undetected. Obviously, Emily also has more undisclosed abilities that players can discover in the finished product.

The environments of Karnaca aim to feel a bit more alive and unpredictable, with an example showing Emily get caught in a storm while sneaking around enemies. Not only can weather effects like this work both for and against you if you’re taking the stealthy route of gameplay, but the characters will even comment on the weather changes, as Emily acknowledges the storm occurring around her. Developer, Arkane Studios demonstrated how players can opt to be stealthy and non-lethal or aggressive and murderous, as with the first Dishonored, and how there remain multiple paths of progression and multiple ways to enjoy the experience, depending on a player’s preferences, in Dishonored 2.

Another very curious element of Dishonored 2, and one that incorporates shady deity, The Outsider, is The Outsider’s Timepiece, which is briefly shown during another gameplay demo with Emily. Using the Timepiece, players can both glimpse the past from the present, and even move between past and present to engage unseen foes! The example shown was of an old and decrepit mansion, which became bright and well-maintained when Emily shone the Timepiece on it, also necessitating that she sneak carefully around guards in the past to take them out unseen, if the player chooses a stealthy approach. Time appears to play a significant part in both the story and gameplay of Dishonored 2, and should be a significant way to separate the sequel from its predecessor.

Along with showing off the first gameplay of Dishonored 2, Bethesda also confirmed a collector’s edition for the game, which retails for $99.99 USD. The collector’s edition includes a copy of the game on your chosen platform (duh), a bust of Corvo’s mask, a replica of Emily’s ring complete with display case, a steelbook case, the Imperial Assassin’s Pack, which contains various in-game bonuses like Bone Charms and Lore for use in the game proper, and a digital copy of Dishonored: Definitive Edition on your platform of choice! In fact, for a limited time, anyone who pre-orders even the standard edition of Dishonored 2 on any platform, will receive a free digital copy of Dishonored: Definitive Edition on their chosen console, or PC if they’re going that route.

Dishonored 2 releases for PlayStation 4, Xbox One and PC on November 11th of this year.