Ubisoft has gotten increasingly creative with their beloved, highly challenging series of Trials arcade stunt racers, but they’re about to strive for a new creative high, and one that will especially please fans of 2013’s cheeky standalone expansion game, Far Cry 3: Blood Dragon. 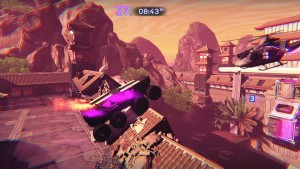 As a major surprise announcement during their E3 press conference, Ubisoft unveiled Trials of the Blood Dragon, which was announced via a satirical 1980’s-commercial-looking ad that revealed Far Cry 3: Blood Dragon protagonist, Rex “Power” Colt as a main character, now joined by his wife and children! Trials of the Blood Dragon combines the stunt-focused motorcycle racing of Ubisoft’s more everyday Trials games, and also combines it with shooting elements that call back to 2013’s release of the first-person-shooter-style Far Cry 3: Blood Dragon.

The very existence of this mash-up is shocking enough, but even more shocking is that Ubisoft is wasting no time releasing it to the public. In fact, Trials of the Blood Dragon is available digitally right now on PC, PlayStation 4 and Xbox One, where it’s sold for $14.99! Apparently, players just need to discover most of the madness for themselves.

Keep racing to Eggplante for all major news and updates on Ubisoft’s Trials and Blood Dragon games.