Speaking at the Nintendo Treehouse Live E3 showcase today, Nintendo revealed new details about this September’s upcoming collector RPG, Yo-Kai Watch 2. This news also came with a tease for the upgraded model of Yo-Kai Watch toy, which has a few added functionalities in contrast to the original model of toy, and will launch around the same time as Yo-Kai Watch 2 this Fall. As previously revealed, Yo-Kai Watch 2 will come in two versions; Yo-Kai Watch 2: Bony Spirits and Yo-Kai Watch 2: Fleshy Souls, both once again releasing for the Nintendo 3DS line of handhelds, and both directly published by Nintendo in the West, after being developed by Level-5. The combined lineup of around 450 Yo-Kai will naturally be spread between the two games, with some being exclusive to one of the two versions. 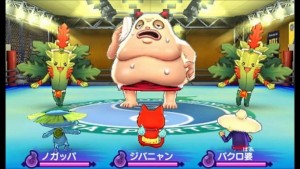 The game demo showed off some details on the gameplay for Western gamers, though sadly, most of the text was in Japanese, meaning that the English-spoken personality in the game’s official localization is still a mystery. Still, the time travel element that’s new to the sequel was teased, as protagonist, Nate encounters a Yo-Kai that was once allied with his grandfather, now grown massive and overloaded with energy, whom Nate cures by releasing an energy plug on the friendly spirit. Appropriately, the game’s battle system is similar to its predecessor, with players using the stylus to spin the Yo-Kai Watch dial on the Touch Screen to both rotate Yo-Kai in combat, cure status effects, and use certain special attacks.

Also showed off was an all-new co-operative multiplayer mode for Yo-Kai Watch 2, dubbed ‘Yo-Kai Watch Busters‘, which allows up to four players to team up certain varieties of Yo-Kai and perform various challenges together. The minigame-style mode has already been a huge hit in Japan, and has players taking on bosses in streamlined, arcade-style combat. The mode promises ‘rewards’ of some variety, presumably to take into the main game, but Nintendo didn’t elaborate much on this. That said however, the bonus Yo-Kai Watch Busters mode was so successful in Japan in fact that it’s spawned several of its own dedicated spin-off games for Nintendo 3DS in the Land of the Rising Sun!

Keep divining Eggplante for all major news and updates on Yo-Kai Watch.