While current-gen remasters of last-gen games were fairly frequent in the first couple of years of this console generation, they do seem to have slowed down a bit this year, even if some, like 2K’s BioShock: The Collection and Warner Bros.’ Batman: Return to Arkham, are still due for release within the year. We can add another last-gen game to the upcoming current-gen remaster queue as of today too, as Nordic Games has announced, rather surprisingly, that they’re remastering the original Darksiders game from 2010, possibly as an indication that they are almost ready to properly announce a third Darksiders game, which has been in development for some time now. 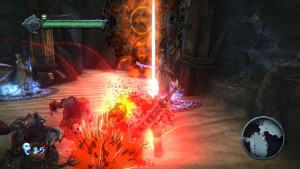 Darksiders was originally released for Xbox 360, PlayStation 3 and PC, where it was developed by the now-shuttered Vigil Games, and published by also-defunct outfit, THQ. The game takes place a hundred years after the apocalypse, which one of the Four Horsemen of the Apocalypse, War, is seemingly tricked into jump-starting early. After being judged by the divine council of the universe, War is given a chance to prove his innocence in the now-dead world of humanity, taking on monstrous threats and exploring treacherous environments.

Darksiders’ remaster will be called ‘Darksiders: Warmastered Edition‘, though the remaster currently has no release date or price. It will apparently boast the expected improvements to the experience though, namely visual touch-ups like new native 1080p HD resolution, improved animation rendering and textures, accentuated shading and post-processing effects, and a full 60fps framerate… In most cases. In the case of the remaster’s PlayStation 4, Xbox One and PC builds, the framerate will run at a full 60fps, but it will remain at the last-gen cap of 30fps in the case of the Wii U version, which will still receive the other technical upgrades nonetheless, along with presumably the unique hook of off-TV play on the Wii U Gamepad Screen. 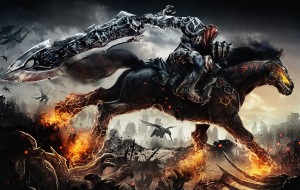 Yes, Darksiders: Warmastered Edition is coming to Wii U, despite no other current-gen remasters bothering with a Wii U port. While this may seem odd at first, especially with the Wii U in its twilight months, the existence of a Wii U port of Darksiders: Warmastered Edition was probably motivated by Darksiders II being released on Wii U, where it served as a launch title for Nintendo’s console in 2012, several months after initially releasing for Xbox 360, PlayStation 3 and PC. The remaster’s surprising Wii U release could also provide some solid evidence that Darksiders III, a game that’s pretty well certainly planned for PlayStation 4, Xbox One and PC, could also be in the works for Nintendo’s upcoming NX platform, thus encouraging Nordic Games to make sure that Nintendo gamers could experience the entire saga to date beforehand. Previously, Darksiders II was also remastered, by new outfit, Gunfire Games, a studio consisting largely of former Vigil Games staff, as the series’ current latest release last year, dubbed ‘Darksiders II: Deathinitive Edition‘ for PlayStation 4, Xbox One and PC, though not Wii U in that case.

Keep riding to Eggplante for all major news and updates on Darksiders.