NOTE: Some mild spoilers from the third season of “BoJack Horseman” are present in this review. That said, the review is written to accommodate those who have not yet seen the season, and as such, will avoid discussion of major plot developments.

BoJack Horseman, like many animated sitcoms designed for adults, didn’t hit its stride right away, thanks to a rather uneven first season. By the time it had reached its second season however, the kinks were worked out, and BoJack Horseman became something truly special, as well as one of the first wholly successful original sitcoms on Netflix, alongside Unbreakable Kimmy Schmidt. Considering the huge gap in quality between the first and second seasons then, this year’s Season Three would likely be the selection of episodes to decide how great the show actually is.

Well, good news! Season Three is another excellent season, and continues to elevate the show’s quality with another batch of tragically comic misadventures for its title character and his posse, fully cementing BoJack Horseman as one of Netflix’s all-time champions of original television programming at this point! The show continues to pack no shortage of star power, in everything from leads to passing cameos, and the show’s darkly amusing character continues to create a world that keeps effectively expanding, and becoming more unique and memorable with each passing episode, especially this season, where the episode concepts become especially weird and creatively ambitious, in a fantastic way. 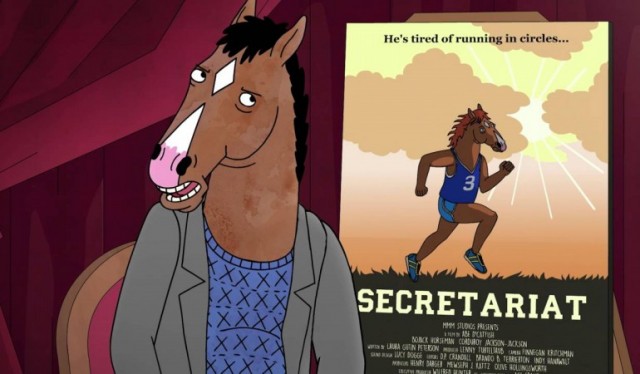 The fact that Season Three matches, and sometimes even exceeds the stellar quality of Season Two is particularly noteworthy as well, considering the big changes to the show’s core dynamic, especially with BoJack’s character. BoJack spent the show’s first two seasons being washed-up and desperate to re-capture a true sense of artistic glory after his one flash-in-the-pan television hit, fictional sitcom, Horsin’ Around, which has rendered him a quite literal one-trick pony. In Season Three however, BoJack has seemingly achieved all of his dreams from earlier in the show, being on the path to high praise and Academy Award consideration for his fictional dramatic take on Secretariat (not to be confused with the real-life Disney-distributed movie that came out in actual theatres six years ago), and dealing with his supposed shot at redemption, along with renewed recognition as an actor.

In fact, things are looking up for pretty much all of the show’s personalities this season! Todd begins a successful business venture, Princess Carolyn is large and in charge as the new boss of VIM, Diane and Mr. Peanutbutter continue to be married and stable, despite Diane’s big lie in Season Two, though in the case of Mr. Peanutbutter, there isn’t as much new ground forged, since he’s always been a happy, chipper character. Even Mr. Peanutbutter goes through some surprising ordeals during Season Three though, and what’s particularly inspired about the season’s writing and humour is how well it still manages to mine character growth and interesting conflicts for each lead personality, even when all of them now seem to have accomplished their big goals from Season Two.

This is especially true of BoJack, who, as expected, still can’t escape his demons, misery and depression, despite igniting a prestigious new movie star career with Secretariat. Through BoJack, the themes behind Season Three are pretty obvious, namely that awards and fame aren’t enough to make one happy and fulfilled by themselves, even if that’s a fairly common message in many celebrity-themed sitcoms and dramas. The very smart dark humour manages to elevate the season above even the most predictable of subtext though, allowing the third season of BoJack Horseman to find an interesting new way to convey a message that may have been drilled into us many times already in prior media, but is illustrated especially well here, particularly given this show’s returning main strength of how well it examines depression and self-loathing.

With quite a few characters exiting the series with the end of Season Two, even though the living ones may yet return in future seasons, there’s several new personalities that are introduced in Season Three as well. Chief among these new personalities is Ana, BoJack’s new publicist, who will do whatever it takes to get BoJack his Oscar, leading BoJack to consistently question whether he’s found a true friend in Ana, or just someone who wants to put his name on something. A teased character from last season, Jill Pill, is also featured in the flesh this season, where she’s portrayed as a perpetually unsatisfied, highly abstract-thinking spider playwright who had a hand in BoJack’s failed follow-up to his fictional television series, Horsin’ Around, The BoJack Horseman Show, which itself feels like a big meta in-joke about how unlikely a success this Netflix series actually is, despite the pitch being a failure in its own universe. 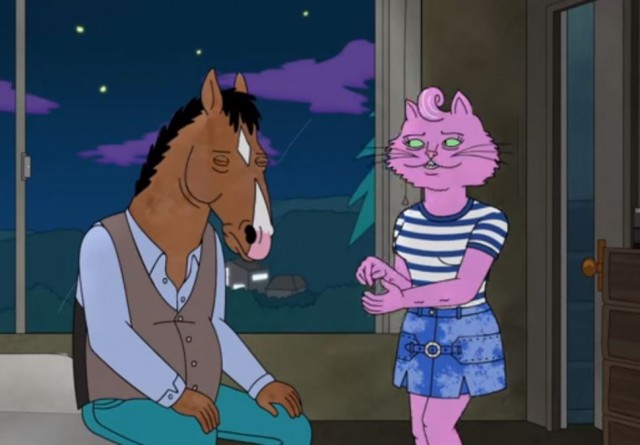 For all of the superb punctuating drama and character subtext though, Season Three of BoJack Horseman still succeeds wonderfully at just being a flat-out funny, witty and very memorable sitcom, just as it also did in Season Two. This season certainly gets dramatic in some places, but it never feels tacked-on or unearned. The drama flows well with the comedy, and now that the characters are in positions of conventional success, the show, if anything, is actually funnier than ever in Season Three! In fact, the comedy really being at its best this season also makes the dramatic moments shine all the more too, with the season carefully placing some select sobering moments of tragedy and sadness, some actually being very shocking as well, to remind us that, for all of the weirdness of this world where anthropomorphic animals freely walk along, and even mate with, regular humans, there’s still something so fundamentally human about BoJack, despite the fact that he’s a humanoid horse. That’s what makes his weird, funny and heartfelt journey so great to experience, and both laugh and cry along with.

The only slight issue with the otherwise excellent third season of BoJack Horseman is that it doesn’t fully stick the landing at the end. The initial eleven episodes of the season are all pretty much excellent overall, in terms of building a show that is as funny and charming as it is heartfelt and relatable, even with its weird exterior and Hollywood-, er, “Hollywoo”, setting. The twelfth and final episode of the season however feels a tad rushed, since the show spends a lengthy seasonal climax over the past two episodes or so challenging BoJack in a big way, but that comes at the expense of the other characters’ arcs. Thus, this last episode is left to hastily move the characters into the necessary new places for Season Four next year, which the show was renewed for on the same day that this third season was released, with little organic development.

Another problem here is that arguably the season’s biggest and most unexpected dramatic twist happens right before the start of this twelfth and final episode, and then, in the season finale proper, the show barely addresses it past the opening moments. Perhaps the fallout is being saved for Season Four, but considering the huge, dynamic-altering magnitude of this twist, it really felt like the drama that results just doesn’t have enough room to breathe in the simple span of one twenty-five-minute episode, especially when the show has to use up most of the episode’s runtime hastily setting up the other characters beyond BoJack himself for their next endeavours in Season Four.

Even if the wrap-up isn’t quite as stellar as the rest of the season though, BoJack Horseman remains firing on all cylinders in Season Three. Even as the title character never seems to fully escape his depressive demons or being the source of his own misery, there’s always just enough heart and reason in his crazy world to make him worth rooting for. It also doesn’t hurt that the chipper and charming supporting cast of the show helps to nicely balance out BoJack’s innate selfishness and self-loathing, and the fact that their own journeys are just as fantastic in Season Three is all the better. Hollywoo certainly remains a strange, off-the-wall place, but the continued upward climb of its alleged victim to self-acceptance continues to elate and uplift, even when the day seems darkest.