NOTE: Full spoilers for this episode of “Preacher”, including a major character death, are present in this review

Preacher’s penultimate Season One episode, “Finish the Song” set the stage for a very interesting season finale next week, particularly since it finally establishes a proper look at the show’s interpretation of Hell. It also finally resolves the pressing mystery surrounding the Saint of Killers, while also containing some stirring moments for Emily and Sheriff Root especially.

In fact, something that was sort of surprising about this episode is that most of it didn’t focus on Jesse for a change. Jesse still played a decent part in proceedings, but it felt like the show clearly prioritized the supporting cast this week, likely because of Jesse no doubt being the key center of the show’s season finale next week. Jesse kicks off the episode with Sheriff Root at least, who is preparing to take him to jail after Jesse’s actions against Odin and his men (after Root tells another story about how twisted people are, of course), though Jesse cleverly jams the door with a pen and escapes. As usual, Jesse hasn’t lost a step, even when he seems to be cornered.

After that, Jesse somewhat takes a backseat, but that’s fine, since it creates a welcome opportunity to look at the rest of the show’s great ensemble cast. Many characters had particularly big moments too, and surprisingly, DeBlanc and Fiore still found a way to work themselves into the show that made sense, even with them failing in their mission to extract Genesis from Jesse last week. The two finally decide to ditch Annville, in favour of another particularly sunny and heated location; Hell!

DeBlanc and Fiore’s deadpan comedy was more entertaining than ever this week too. Whether it was Fiore solemnly agreeing to have sex with a divine desk clerk for passage, or the two angels deciding to see if a coin flip will let them chicken out of going to Hell in favour of returning to Heaven, only to discover that their phone was stolen and that they have to go to Hell regardless, these moments helped inject some welcome humour into an episode that once again mostly leaned on the horror elements of Preacher more than anything else. This also finally gave us an excuse to glimpse Hell, which, apparently, is a place of psychological torment in the world of Preacher, rather than the fire-and-brimstone takes of some media.

The other character who had a really awesome and shocking moment of development this week was Emily, who showed her true colours in a horrifying way, after Tulip leaves her to care for Cassidy. Tulip reveals that Cassidy is a vampire too, which Emily quickly bears witness to, after feeding him a guinea pig. At first, it seems that Emily is predictably queasy about feeding Cassidy live animals so that he can heal from his injuries, though that simply made the subsequent shock all the better. After recalling a mention from Tulip that Cassidy isn’t healing enough, despite all of the animals that he’s eaten, Emily gets a very, very bad idea. After calling Miles into the O’Hare house, following quietly enjoying a recreational bare-knuckle wrestling match that Odin Quincannon is holding in his office for reasons unknown, Emily pretends to be in trouble, and eventually locks Miles in a room, where Miles is quickly killed and drained of blood by Cassidy! Yes, Emily just let her fling die, because he was getting clingy. Cold doesn’t even begin to describe that move! This also effectively re-interprets Emily’s character, as her rough-edged sweetness may mask an inner layer of cold, calculated self-sustainment. It was an excellent moment, and probably the episode’s best. 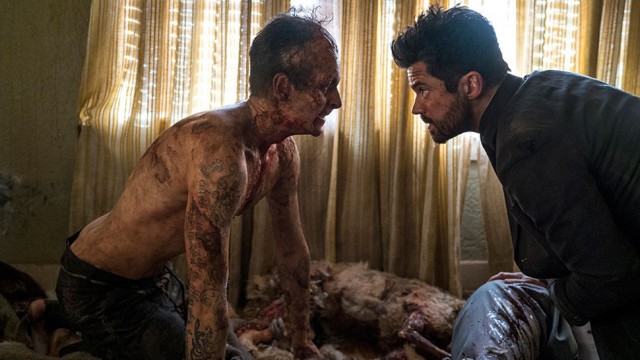 Sheriff Root also provided a highlight moment, as he tries to comfort the Seraphim, discovered in the hotel’s bloody bathtub with her hands and feet severed. I guess that’s a legitimately creative solution on the part of DeBlanc and Fiore. Anyway, the Seraphim begs Root to kill her, and eventually, he strangles her to death, not realizing that she spawned again behind him. Root is a beautifully tormented character, and one of the show’s most complex and appealing supporting personalities, so it was very cool to see him also have to make a hard choice, even though viewers know that it’s not one of any moral or divine consequence. To Root however, it’s just another atrocity in a long career of darkness and evil, which he now seems to be eerily resigned to.

The only slight knock against this episode is the fact that little is done with Tulip, who finally gives up on Jesse and goes to Albuquerque on a whim, finally cornering the man she was after. Cassidy and Jesse also make up surprisingly quickly, with Jesse apparently having put out the burning Cassidy immediately after the scene cut away a couple of weeks back, though this does give them an opportunity to cleverly dig up one of the buried DeBlanc/Fiore corpse piles and steal an angel hand so that they can use Heaven’s phone. Ultimately though, considering the great character work, it’s a shame that the episode didn’t find more use for Tulip, who seems like she’s going to be annoyingly disconnected from the season finale’s big events next week, at least for now. That’s a bummer.

Preacher is going darker as its first season approaches its climax, but the spotlighting of the supporting characters and their demons was where this episode was at its strongest. It was also satisfying to finally get some answers with the Saint of Killers storyline, at least, for those who haven’t read the source comics and can’t fill in the blanks, and Emily’s stone-cold murder of Miles, effectively trading his life for Cassidy’s, was another standout chilling scene. The awesome highs of the past couple of weeks were mostly replicated here, even though the lack of compelling Tulip material was a disappointment, and if this momentum can be kept up next week, then Preacher is sure to close out its debut season on a very high note!

Preacher 1.9: "Finish the Song" Review
Preacher once again leaned especially heavily on its horror elements this week, in an episode that mostly highlighted the supporting cast and their individual anguish in shocking ways.
THE GOOD STUFF
THE NOT-SO-GOOD STUFF
2016-07-27
89%Overall Score
Reader Rating: (0 Votes)
0%