NBC has been hosting the Rio 2016 Olympics for the past little while, and they also seem to have gotten the bright idea of using the event to further promote their likable new freshman sitcom, Superstore, ahead of its second season premiering late next month. This comes in the form of a special standalone episode, “Olympics”, which flashes back to the halfway point of the show’s canon from Season One (thus ignoring the shocking ending to the first season), and ties into Cloud 9’s antics with the then-upcoming Rio 2016 Olympic Games.

It’s been a long while since we’ve had an episode of Superstore to enjoy, considering that the show has been off the air after the shortened and highly irregularly-aired Season One that concluded this past February, but, “Olympics” serves as a fairly enjoyable reunion with the Cloud 9 crew, even if it doesn’t give any insight as to where and how Season Two is going to pick up in September. It is however difficult to escape the feeling that the episode is a calculated promotional move by NBC, rather than its own truly inspired story for Cloud 9. This leads to a few plot resolutions that really don’t land, especially in the constrained half-hour timeslot, but at least these characters are as entertaining as they ever were. 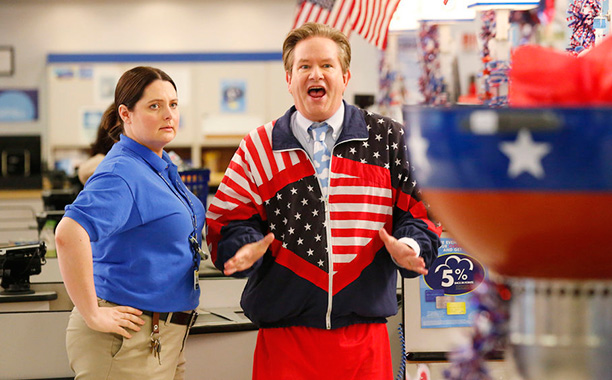 The special episode spans several plot threads, each involving a handful of the Cloud 9 personalities. The best of these is probably when fictional gold medal-winning gymnast, Missy Jones, played in an amusing guest role by Cecily Strong, visits the store, much to the adoration of Amy, who claims to be her biggest fan. Strong fits right in with this crew, and her athlete’s running joke of being able to convince anyone of even the most cheesy sentiment with a mere stare and calming tone is especially funny. The joke got all the better when Amy tries to use the same trick to manipulate her co-workers, only to have everyone see through it, since she has far less charisma. One of the episode’s best jokes here also came, unsurprisingly, courtesy of Dina, who comments that she’s unimpressed by celebrities, before grilling Missy about Olympic weightlifters that she may or may not have slept with. Dina continues to be an ever-appealing mystery of simultaneously being both the coolest and uncoolest person at Cloud 9, and boy have I missed her!

Fortunately, Dina also gets her very own subplot (along with a reveal of her surname, Fox), being once again locked into a squabble with Glenn, after Glenn gets a little overzealous with promoting the Rio Olympics at the store with a literal opening ceremony in the episode’s cold open, which humourously leads to Myrtle obliviously setting a toilet paper display on fire that engulfs the store in an inferno. Only at Cloud 9. Regardless, Dina thinks she can do better than Glenn’s humourously botched opening ceremony with her own closing ceremony, and forces Garrett to go along with her increasingly outlandish desires, which include helicopters and white stallions. The subplot almost entirely serves as pure gag fodder, but Dina’s antics lead to lots of strong humour, especially when she gets another opportunity to pick on Sandra, who is revealed to have a high-functioning autobiographical memory in this episode, making Sandra incapable of forgetting anything. In other words, every time anyone has ever insulted or neglected Sandra, she can’t forget it. It should be sad, but it’s strangely hilarious. 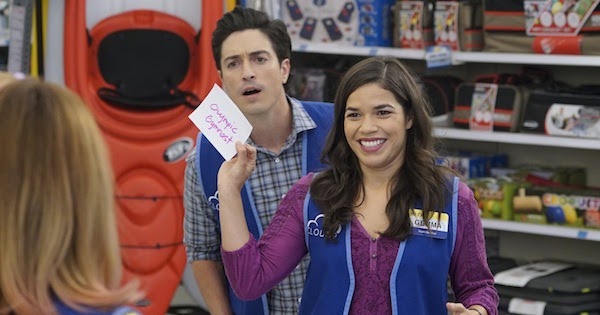 The other subplots in the episode work to more mixed effect, even if they still carried enough laughs to satisfy. Cheyenne planning to drop out of school to become an Olympic athlete, after Amy ill-advisedly tries to use Missy’s manipulation trick on her, started out promising, but it eventually came apart a bit, especially when Cheyenne inspires several of the smaller employees to pursue impossible dreams, forcing Amy to be the bad guy that tries to bring them back down to Earth. That joke was somewhat funny, but it was hurt by Amy having to hastily backtrack with Cheyenne, after some failed help from Jonah, only to have Cheyenne later admit that she never had any intention of following through with her Olympic dream, and simply wanted to live in the fantasy. This felt like too quick a fix, and stunk a bit of the writers writing themselves into a corner with this story idea, since Amy is forgiven too easily, and there’s never any real consequences to her actions. I guess that’s a potential drawback to having to write an episode that takes place on a formerly unseen day of Season One though, where Cheyenne obviously didn’t leave Cloud 9 or drop out of school.

Another subplot that was a little more shaky was the Glenn/Mateo subplot, which, again, started out fairly funny, with Glenn claiming that America is the best country in the world without basing it on anything, and this leads to him trying to prove how great America is to Mateo, after Mateo wears a flag representing his home nation of The Philippines. This story quickly loses steam unfortunately, since Mateo immediately admits that he still loves America, making all of Glenn’s ridiculous patriotism just feel like it wastes time. This was another story element that also had too quick a fix, since Glenn immediately backpedals when Jonah explains the Olympic Rings symbol of worldwide unity to him, which Glenn apparently thought was meaningless for some reason. All the while, Mateo finds out that he’s an illegal immigrant, and this would have been a promising development… Had it not been placed at a point earlier in the show’s canon. This leads to the weird inconsistency of most of Season One never having Mateo acknowledge his illegal status, since this idea for the character was clearly added in this special episode after Season One was already completed. Maybe this twist with Mateo will be expanded on more in Season Two, but for now, it feels disappointingly pointless.

All in all though, “Olympics” was a fun tie-in to Rio 2016, which made up for its handful of story stumbles with a healthy supply of good comedy. The tactic of using the Olympics to promote Superstore seems to have paid off, since early reports suggest that this is easily the highest-rated episode of NBC’s retail-themed sitcom to date, and hopefully that continues to lead to an even better Season Two this Fall and early next year. Even retroactively taking place earlier during Season One’s events, the end of the episode also capped things off very nicely, as Dina goes through with a surprisingly ambitious closing ceremony that includes neon lights, dancers, fire-breathers, and yes, helicopters. It’s ridiculous and makes no sense, but much like Superstore itself, it defies that weirdness with its big, proud heart.

Superstore 2016 Special: "Olympics" Review
Superstore gets a special tie-in episode for the Rio 2016 Olympics, which is pretty funny and entertaining, even if not every subplot fully succeeds.
THE GOOD STUFF
THE NOT-SO-GOOD STUFF
2016-08-20
76%Overall Score
Reader Rating: (0 Votes)
0%