Well, I knew the streak couldn’t last forever. After doing relatively well over the past few weeks, Fear the Walking Dead sadly started disappointing again in, “Pillar of Salt” this week, albeit not fatally. There’s time for the season to right itself again in the two weeks it has left, but this episode spent most of its duration undoing a lot of the positive changes that the show had made over the past few episodes, in favour of just trying to reunite everyone so that they can go somewhere else for next year’s third season.

Fortunately, we at least got answers regarding Ofelia at long last, and, as expected, she did take off in her group’s car, in an effort to apparently return to the U.S., and probably seek her long-lost fiance. Oh yeah, Ofelia was very nearly married. She apparently turned down the marriage proposal to stay with her parents before the world went sideways, and the idea of Ofelia trying to find happiness with both of her parents seemingly gone (even though Daniel’s death still has yet to be confirmed one way or the other), is a pretty interesting one… Which is why it’s very frustrating that the episode wastes it, by awkwardly tossing this handful of flashback scenes into two other major storylines that already define the episode.

Ofelia has constantly been under-developed on this show, and it feels like the season might have benefited from an episode focused almost entirely on her. We get a peek at the kind of person that Ofelia really is, and what she’s sacrificed, and now truly lost, with the coming of the Walker apocalypse. With Season Two nearly done though, Ofelia just seems to ride off, and for all we know, we may not even see her until Season Three now. Moreover, Ofelia stealing the car and screwing over her group still feels just as stupid as it did when the show first implied that this happened. I also noticed that the show conveniently didn’t explain how Ofelia got out of the hotel, around a bunch of Walkers, hardened guests and allies, and somehow started a car and drove away, without alerting anyone. Seriously? In the dead quiet of the Walker apocalypse, an engine should be pretty easy to detect for anyone in the vicinity, including and especially Walkers.

Still, Ofelia’s handful of scenes made for some of the better storytelling elements, since the two other major storylines both started to suffer from this show’s reliable brand of contrived, illogical writing in several places. Worse still is that the character growth was sometimes undone by some of these forced contrivances. Alicia is back to being a whiny cynic, and Madison is back to being an irresponsible, reckless idiot, to be specific. Strand at least avoided this regression, but Strand also spent the entire episode bedridden on account of getting stabbed. Yes, Strand actually got stabbed by the mother of the bride he euthanized at the end of last week’s episode, which, even for a deranged woman, feels like a pretty ridiculous move. What in the world will stabbing Strand accomplish beyond getting her imprisoned at best and exiled at worst, especially when it definitely won’t bring her daughter back? Also, if she must do something that stupid, why not stab the husband? He was the one who signed off on Strand taking care of his bride!

Nick’s storyline was at least the less frustrating of the two major plots this week, but it also served as a transparent way to force an unlikely reunion between the show’s leads. Nick’s plot involved a family deserting the colony, which might give the supermarket thugs a way to determine where the colony is. Why did the family desert what seems to be a perfectly functional society? Who knows. Probably the same plot-convenient temporary insanity that made Ofelia pack up and drive off. Regardless, this creates two bouts of forced drama, between Nick trying to convince Alejandro to make the latest medicine trade when Alejandro says that no one can leave the colony after the desertion, before stepping up to save everyone himself (at least his character didn’t regress), and Madison overhearing the parents of the deserting family being interrogated about the colony’s location, then hearing a mention of Nick. We know it’s Nick, but Madison doesn’t, and yet, that doesn’t stop her from charging into the conveniently open and within-earshot interrogation room to demand answers about the boy they’re talking about. Seriously, Madison?! I get that you’re a concerned mother, but you certainly won’t reunite with Nick if you so needlessly get yourself and your party killed!

Madison’s idiotic behaviour unfortunately rounded off the episode, and it got worse too. Even after her party manages to find the life-saving medicine for Strand, Madison turns on the hotel lights at night, in an effort to attract Nick’s attention. In a show full of infuriating and illogical face-palming moments, this had to be one of the worst of this season, at least! Why would Madison do this?! Alicia even points out that everyone can see that light, and even if that does include Nick, he chose to be away from his family, so why would he come? Moreover, the show completely glossed over the obvious hypocrisy of Madison not having the patience to win back one of Elena’s nephews that is conveniently in the supermarket gang, yet endangering literally everyone at the hotel (including Strand, who she just went to such great efforts to save), on the very slim chance that maybe Nick wants to come back, and is maybe able to see the beacon, and maybe assume that it’s his mother and sister, based on nothing. This was a very, very transparent way to simply bring trouble to the hotel for the season’s climax, and even if it attracted Travis, who starts going towards the hotel in the episode’s very last scene, this stunt was probably good enough to get Madison exiled from the group, though she almost certainly won’t be. 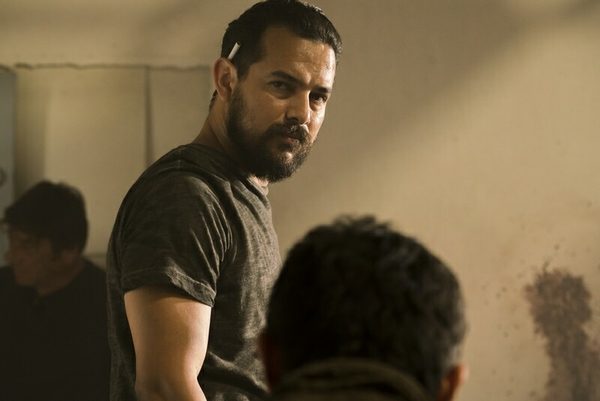 Maybe these weak episodes will start becoming the exception, rather than the rule, eventually, but for now, “Pillar of Salt” and its flaws call back to the recurring stumbling blocks that Fear the Walking Dead seemed to be gradually overcoming since the back half of Season Two started last month. Yet again, the show is back to transparent contrivances and illogical character turns. Despite the promising story elements that have arose from fracturing the core group of survivors, the show is now straining to find excuses to bring them all together again, and possibly even ditch Ofelia entirely before next season. Maybe we can at least look forward to a fairly exciting end for Season Two over the next two weeks, but it would be nice if Fear the Walking Dead could also cap off the season with some story threads that are actually worth the wait.

Fear the Walking Dead 2.12: "Pillar of Salt" Review
Fear the Walking Dead sadly went back to disappointment in a weak episode that was dragged down by too many story contrivances, especially from an infuriatingly idiotic Madison.
THE GOOD STUFF
THE NOT-SO-GOOD STUFF
2016-09-19
65%Overall Score
Reader Rating: (0 Votes)
0%