The Big Bang Theory’s ninth season sadly ended on a rather dull note, especially when the season finale seemed to contain a storyline that, frankly, felt like it was awkwardly chopped in half. The second half of that story has now served as the backbone of the Season Ten premiere this week, and while this episode is an improvement over the disappointing Season Nine finale, the episode is still dragged down a bit by having to piggyback off of such a lacklustre episode from the end of the previous season.

Things immediately kick off by centering on one of the better story elements from the Season Nine finale, that being the tease of Alfred Hofstadter and Mary Cooper potentially hooking up in secret at their hotel. Fortunately, this involved an amusing nighttime dialogue shared between Sheldon, Leonard and Penny to start the episode, and Sheldon, as he can be reliably expected to do, kept the comedy strong for this season premiere. The point where Sheldon started impressing on Leonard that they could become brothers was particularly funny, especially when that does present some legitimate storytelling promise for down the line, should it come to pass.

Once again, a lot of the humour was also carried by Alfred, Mary and Beverly, especially when Beverly is predictably disturbed by the idea of Alfred and Mary hitting it off. We also finally get to meet Penny’s family, with her father already previously appearing on the show, though now, he’s joined by Penny’s brother, Randall, played by Jack McBrayer, and Penny’s mother, Susan, played by Katey Sagal. As much as the Hofstadter and Cooper families were reliably funny though, it felt like Penny’s family was a bit short-changed. Their humour was passable, but it also suffered from having to introduce the new mother and brother characters in an episode that already has several storylines fighting for attention within the half-hour space.

This over-crowding of storylines also hurts some of the overall humour, which is disappointingly bland and trite in some places. There wasn’t even a single geek-themed joke made in this season premiere, which is fine, I suppose, though it does draw more attention to the fact that much of this episode’s jokes don’t necessarily feel unique to The Big Bang Theory, and instead feel like they’re rehashed from about a hundred other sitcoms. There was a lot of the typical ‘dysfunctional family’ and ‘wedding awkwardness’ humour, and both of those kinds of humour are just way overdone in television comedies. It’s not unfunny necessarily, but it’s not that interesting or clever either.

At least the subplot with Howard and Raj is a bit more noteworthy, and probably had the stronger dose of good laughs. Howard ends up being visited by a colonel from the U.S. Air Force, played by Dean Norris, who ominously beckons him to meet at CalTech, though we don’t find out what for in this episode, again. Many of the paranoid jokes that Howard and Raj make with each other were already done in Season Nine, when this story first cropped up, but at least they still managed some solid zingers in the Season Ten premiere. This being a crowded episode though, the storyline was pretty much entirely dropped after Howard is told to meet the colonel, leaving it to simply set up future story threads for later in the season, rather than find any kind of resolution now, and that’s kind of annoying at this point.

At least we got some resolution that was sorely lacking in the Season Nine finale though, and this came from a surprisingly heartfelt ceremony scene for Leonard and Penny. Considering that these two have been married for a good long while, it was satisfying to see the show avoid re-treading the same sentiments, and actually provide some fresh well wishes from the gang, as well as the parents. Penny’s father telling Leonard, “Welcome to the family, don’t lend your brother-in-law money”, was probably even the biggest laugh of the episode! Even Sheldon had something surprisingly sweet to say to Leonard, even if it also lent itself to a solid joke about Amy expecting a marriage proposal that didn’t come. Bernadette constantly scolding the wedding attendees for chuckles felt a bit forced, but that’s a pretty minor nitpick. 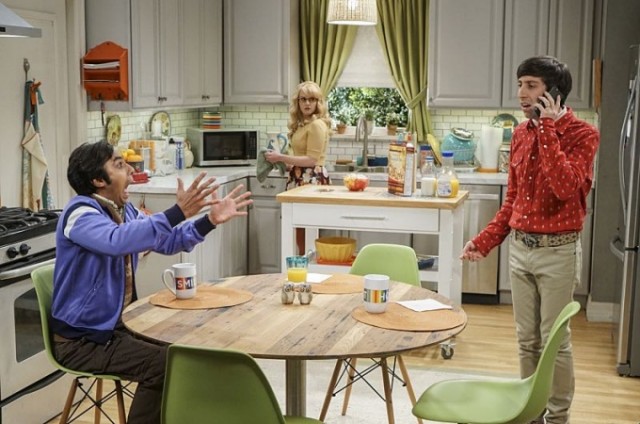 Overall, “The Conjugal Conjecture” wasn’t a great start to Season Ten of The Big Bang Theory, but it was an acceptable one. Again, the episode might have been better if it didn’t have to build from a weak Season Nine finale, but what we got is still an enjoyable enough way to get fans back into the series’ regular schedule of new episodes, at least until the end of October, when it moves back to its usual Thursday slot. There’s still a few storylines that clearly aren’t going to pay off until later in the season, but between Howard being about to come face-to-face with the military, and everyone properly being introduced to the rest of Penny’s family, this should nonetheless be a season with plenty of reliable amusement to carry on with.

The Big Bang Theory 10.1: "The Conjugal Conjecture" Review
The Big Bang Theory's tenth season gets off to an acceptable, if not exemplary start, as everyone properly gathers for Leonard and Penny's second wedding ceremony.
THE GOOD STUFF
THE NOT-SO-GOOD STUFF
2016-09-19
74%Overall Score
Reader Rating: (0 Votes)
0%