Gotham seems to aspire to grow ever larger with every passing ‘Volume’ that now seems to define the front and back halves of each season. This pattern has continued with the front half of Season Three, dubbed ‘Mad City’, and, “Better to Reign in Hell…” continues to have the show becoming gradually more stylized and gradually more visibly rooted in the hyper-reality of DC Comics convention, rather than any recognizable plane of actual reality. This season premiere certainly offered lots of cool possibilities for the future, as we see our first proper look at the fallout from Hugo Strange’s experimental freaks being unleashed on Gotham City at the end of last season, and that presented both ups and downs in a season premiere that was mostly good, but also pretty over-stuffed.

The episode really tries to hit the ground running by hastily explaining away lingering plot threads from Season Two that no longer matter with the start of Season Three, at least at this point. Gordon is shown conveniently finding Leslie most notably, and discovering that she’s now happy with another man, so Gordon responds by becoming a hardened bounty hunter dedicated to making money, drinking a lot, and specifically targeting Strange’s mutants. This is mostly outlined after a time jump of six months later, at which point the entirety of Gotham City is now gripped in fear of Strange’s experiments running loose, and that’s on top of the usual crowd of seemingly endless criminals and corrupt authority figures! 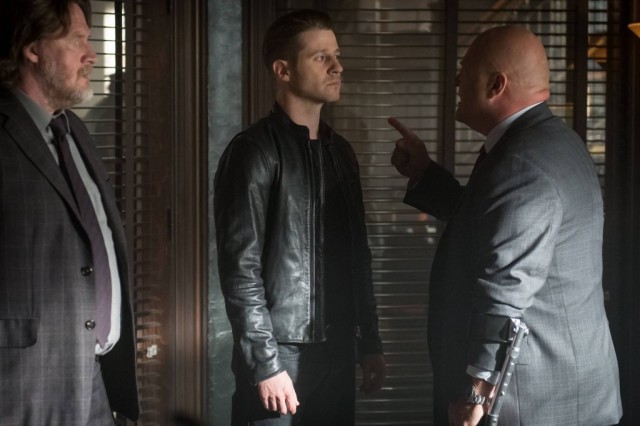 I must say that the drastic change to Gordon’s character actually works better than you would imagine here. Sure, the drinking habit and constant brooding over the loss of Leslie feels a little cliched for a fictional cop hero, but Gordon fully forsaking the law in favour of doing what he perceives the law is not equipped to do presents another interesting dimension to his ever-developing character on this show. Moreover, it also creates an interesting and no doubt intentional parallel to Batman, who will eventually take up the cause of assisting the GCPD in fighting the criminals that terrorize Gotham City, in turn also helping to explain how a ‘good cop’ like Gordon could ever trust and work with a vigilante like Batman in the future.

Speaking of the fledgling Batman-to-be, Bruce wastes no time provoking the Court of Owls in this season premiere, the sinister secret society of rich and powerful Gotham City influencers from DC Comics lore that were inevitably going to make their way to the Gotham universe sooner or later. Bruce and Alfred have apparently spent the last six months finding solid proof that the Court of Owls exists and are the true masterminds behind Indian Hill, and Wayne Enterprise’s dirty dealings, and Bruce bravely calls out the organization during a board meeting that makes for one of this season premiere’s best scenes. This is made all the better by the fact that Bruce and Alfred seem to be getting along better than they ever have before in most cases, possibly in response to Bruce’s maturity and courage in the face of growing danger, which Alfred now seems to be at peace with. He has no idea what he’s in for in a few years though, obviously! 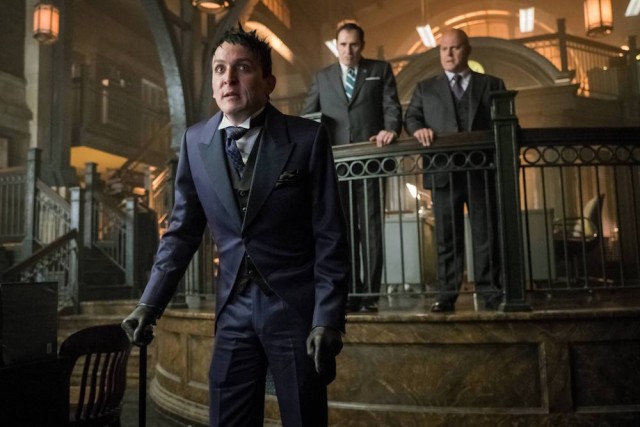 Aside from Gordon and Bruce, we also get updates on several villains, including Penguin, Riddler and Fish Mooney. Fish is of particular interest, since she’s the leader of Strange’s band of escaped freaks, and is currently leading them on a hunt for a mysterious drug that can seemingly cure them of their afflictions. Fish still has the ability to influence anyone she touches, Kilgrave-style, but every time she uses this ability, it now horribly weakens her. This is likely a way to give Jada Pinkett-Smith another easy out from the show, should she not want to stick around on Gotham for much longer, again, but honestly, this is another positive change for Fish’s character, who is now more interesting, and feels like a more unique threat to the city.

Unfortunately, for all of these interesting plot turns, there’s also a bunch of hastily run-through character arcs that didn’t necessarily add much to the episode, beyond eating up time to catch up with more personalities. Among the many subplots are Bruce trying to get back on good terms with Selina, which quickly goes nowhere, and Barbara and Tabitha, who now run their own bar together, being menaced by some local mobsters, while Penguin and Butch try to get the girls back under their wing. Barbara and Tabitha are kind of fun, but again, this story arc feels pointless for now. The same is true of Penguin’s quick visit to Nygma at what is presumably the now Hugo Strange-less Arkham Asylum. The future Riddler gives some quick advice to Penguin on dealing with Fish, and that’s about it. Viewers don’t need to be reminded that Nygma is out there, Gotham. He’s a pretty big character on this show, and we’re obviously going to see him again eventually, hopefully in a story arc where he does more than give Penguin some practical advice that Butch could have just as easily given him. 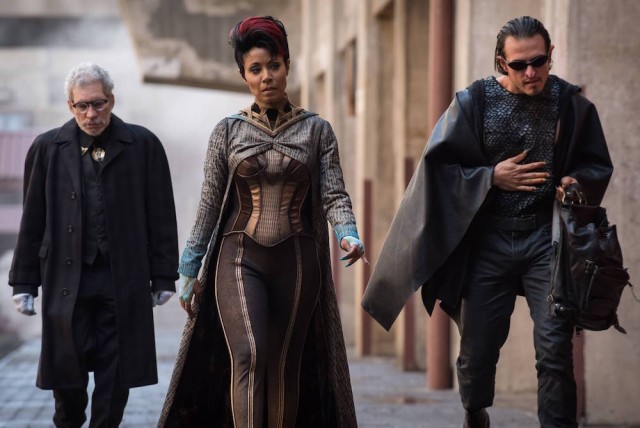 On the note of characters, Season Three also wastes no time foreshadowing new ones. Some of Strange’s freaks clearly resemble prototype versions of future bestial Batman foes like Killer Croc and Man-Bat (even if the Killer Croc prototype ends up killed by a speeding truck fairly quickly), and the show also features a character that ages whoever he touches, providing a convenient excuse to kill off Ms. Peabody after Fish captures her and learns that Hugo Strange is the only one who can fix her (you’d think that would be obvious, plus, why the hell did Ms. Peabody get put in witness protection, and yet, was not moved outside of Gotham City?!), as well as provide Clare Foley’s final appearance as Ivy Pepper. After the young Ivy is held for a bit by the aging man, she manages to wriggle out and fall down a drainpipe, no doubt to respawn as the older Maggie Geha, who is set to fully become the young Poison Ivy for the Gotham universe. I guess that’s fair. The show acts like Ivy’s fate is uncertain, but obviously, if you’ve been keeping up with promotional materials, you know that she’s just getting a very sexy upgrade for the series’ future.

It probably seems like I’m jumping around all over the place and not painting a coherent progression of events, but, this is a Gotham season premiere, and that seems to be how they go. The show is establishing a lot of things in a one-hour timeslot, for what’s sure to be another busy and crowded Season Three. I haven’t even gotten to Jamie Chung’s Valerie Vale yet, a senior variation of famed Gotham City journalist, Vicki Vale from DC Comics lore, who is a fun new character, but also a pretty transparent plot device for this season premiere. Even Barnes’ usual hardline berating doesn’t seem to have much impact in the end, with Bullock taking over the precinct being conveniently swept under the rug, and Gordon going back to being a thorn in Barnes’ side before long. The more things change on this show, the more they stay the same, eh?

It’s all just a bunch of promises for later, but despite a lot of busy storylines fighting for attention in this season premiere, Gotham continues to become more bold and interesting with its vision. After a failed attempt to be more grounded and serious in episodes past, perhaps it’s best that Gotham just goes for broke and fully places itself in the same kind of comic book world that its titular burg spawned from to begin with. “Better to Reign in Hell…” certainly seems to outline a season where the threats to Gotham City are only going to get crazier from all angles, between Strange’s monsters, and the Court of Owls, who send an enforcer to beat the crap out of Alfred, and then carry Bruce off to some uncertain fate at the end of the episode. Considering how enormously successful comic book-inspired shows are on primetime television right now, a crazier Gotham is likely a better Gotham, even if that means not being able to build up to the season’s best ideas right away.

Gotham 3.1: "Better to Reign in Hell..." Review
Gotham kicks off its third season with a typically busy, crowded season premiere, which presents a greater push into comic book territory than ever before.
THE GOOD STUFF
THE NOT-SO-GOOD STUFF
2016-09-20
75%Overall Score
Reader Rating: (0 Votes)
0%