Lucifer was FOX’s sole midseason hit from earlier this year more or less, defying a few bumps in the early episodes to eventually become a dark horse success among supernatural shows and comedic procedurals. Fortunately, that winning streak seems to be continuing with the coming of the Vertigo/DC Comics series’ second season, as, “Everything’s Coming Up Lucifer” maintains all of the cheeky fun and surprisingly interesting supernatural philosophy that has made this show so unexpectedly enjoyable to watch.

The big cliffhanger from the end of Season One had Lucifer telling Amenadiel that their unseen mother had escaped from Hell. Naturally, the second season premiere picks up with Lucifer continuing to fret over this development, even once again forming a shaky alliance with his angelic brother to try and track down Mama Morningstar, as she’s currently referred to. As usual, these two are a hoot together, and they kick off the episode in an effectively funny and exciting fashion, as they take on a group of bank robbers, with Lucifer demanding that his mother come out of the male head robber’s body. When Lucifer realizes that the robber is not his mother, he and Amenadiel have some fun by stopping time to strip him down, put a tiara on him, and tie his shoelaces together. That’s definitely not in line with Lucifer’s usual degree of punishment, but it sure is funny!

As much as Lucifer being paranoid about his mother is predictably played for laughs in many places throughout this entertaining season premiere, the episode also manages some more surprisingly effective commentary on Lucifer’s shortcomings and immaturity, courtesy of Linda. What started as a cheap gag has become one of the smartest outlets of philosophy on Lucifer, and that’s keeping up in the second season, which is great to see. Lucifer’s mommy issues are just as bad as his daddy issues, though the reasoning behind the mommy issues has some extra weight, since Lucifer didn’t do anything to help his mother after his father banished her to Hell for reasons unknown. That will likely come into play later in the season, and I’m really looking forward to seeing how that unfolds.

Of course, we also get a case-of-the-week to go with the supernatural material, and it also happens to be another solid case, in what’s normally this show’s weaker portion. After a stand-in actress is killed, with metal rods jammed into her skull post-mortem to resemble devil horns, Lucifer, obviously, suspects his mother, believing she has come to torment him. Lucifer’s paranoia lends itself to some pretty great rapport with Chloe, who obviously can’t fathom why Lucifer would think his estranged mother has anything to do with their case, though the fact that the paranoia is credible only makes it more enjoyable to watch as another slice of dramatic irony for Chloe’s character. 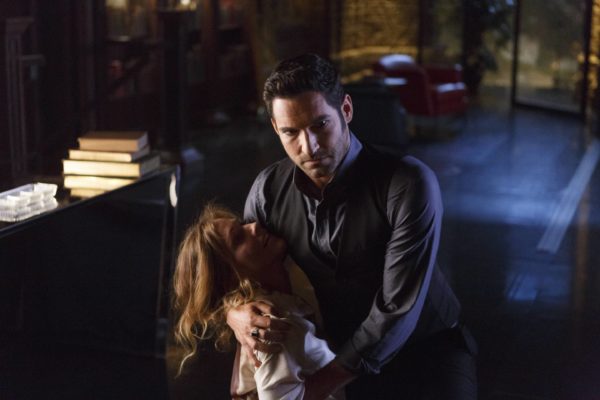 Actually, speaking of that dramatic irony, Chloe continues to suspect that there’s a lot more to Lucifer than meets the eye, and the way that the episode addressed Lucifer’s temporary death in the Season One finale was actually pretty clever. Amenadiel visits Chloe at Lux, and claims that Lucifer exploited blanks, a blood pack and a bulletproof vest to appear dead in order to save the day, in a very suspenseful scene that almost had it looking as if Amenadiel was simply going to let the cat out of the bag at first. This was further helped by Amenadiel’s time-slowing powers appearing to function less effectively, during a failed attempt to steal Lucifer’s blood sample from the local police station. Could Amenadiel’s divine powers also be weakening due to his time on Earth? That would certainly be an interesting way to continue putting him on the same level as Lucifer, even if the coming of his and Lucifer’s mother could also be to blame in some way.

Actually, the one possible sticking point with this otherwise great season premiere for Lucifer is that we don’t actually see very much of Mama Morningstar. The buildup to the character is definitely good, though it might have been best if there was actual evidence of her tormenting Lucifer, and possibly even Amenadiel, rather than the two simply worrying about her being somewhere on Earth. We do see Mama Morningstar tumble into Lux at the very end of the episode, seemingly badly hurt and desperate for Lucifer’s attention, though we won’t know what this means until the next episode, which won’t be airing until the start of October, unfortunately, since Lucifer is already taking a week off next week.

That said though, the way that the case-of-the-week ties into Lucifer’s mommy issues was pretty satisfying, since it’s discovered that the murder culprit was a mother figure who killed the victim because she was also a drug dealer, and the stand-in got sober. It’s maybe not the best reason to kill someone, especially related to such a famous and beloved television program as ‘All About Leslie‘, a fictional teen sitcom that even Maze is apparently a fan of, but this resolution did once again force Lucifer to confront his issues about his own mother in a satisfying, organic way. The cases-of-the-week on Lucifer rarely outshine the show’s supernatural and comedic elements, but they’re often at their best when they at least help service those other storytelling elements, as they do in this episode.

“Everything’s Coming Up Lucifer” exceptionally balanced a larger supernatural storyline with a healthy dose of good laughs and solid mystery, making this an overall great way to kick off Season Two of Lucifer. The show outlined the stakes for the coming season in a smart, enjoyable way, while also avoiding some of the over-stuffing that syndicated genre shows can often suffer from in their season premieres. Everything in this season premiere felt just right, and while we didn’t ultimately get that much of a glimpse at just what Mama Morningstar means for the show yet, we have a whole season to look forward to that development progressing, and it certainly seems like this season will be just as enjoyable as most of the first season, if this quality keeps up!