Our latest major Batman foe has come to Gotham City in this week’s episode of Gotham, and it’s one that’s overdue from last season. After Hugo Strange teased about giving an Arkham Asylum inmate an obsession with Lewis Carroll’s Alice in Wonderland… Well, it seems the show forgot about that little detail, so not much came from that. Nonetheless, Jervis Tetch, better known as recurring Batman nemesis, Mad Hatter in DC Comics lore, has come to the show, and he’s on the lookout for Alice, who is his sister in this universe, rather than a love interest.

Gotham can sometimes be a little hit-or-miss with how well it represents certain future Batman villains, particularly those in smaller recurring roles, though I have to admit that, “Look Into My Eyes” had the show in surprisingly great form overall. A lot of this was due to Benedict Samuel’s genuinely fantastic portrayal of the younger Mad Hatter, pre-Alice in Wonderland obsession, apparently, who is currently operating as a very accomplished, borderline supernatural hypnotist that finds his way to Barbara Kean’s and Tabitha Galavan’s club. Tetch also makes contact with Gordon early on, requesting that Gordon track down his missing sister, for a hefty $10,000 sum. 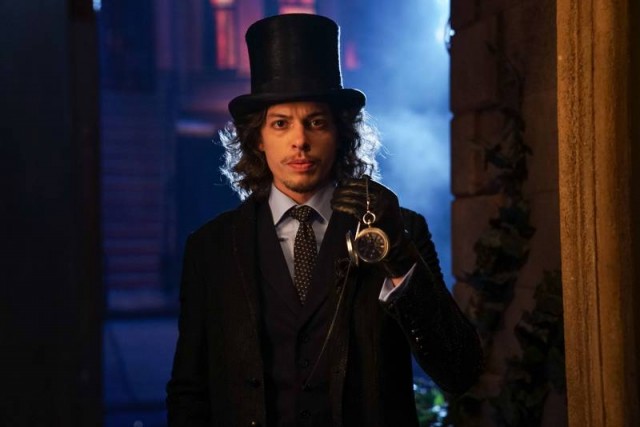 Samuel’s Tetch is one of the handful of Gotham villains that truly does feel scary and unpredictable enough to fit into Batman lore overall, not just the increasingly insane conventions of the Gotham universe. From seeing Tetch use his hypnosis powers to murder a couple and steal their house, to a later scene where Tetch almost drives Gordon to a horrible suicide by probing his sub-conscious despair, this is another villain that is genuinely appealing to watch, and one that will hopefully be a recurring presence in much of Season Three, just as Hugo Strange was for Season Two.

This examination of Gordon losing himself to his new, darker personality was also put on good display with the proper return of Leslie Thompkins, teased at the end of last week’s episode, who has taken up her old position as medical examiner for the GCPD. Despite being assured that she won’t have to deal with Gordon by Barnes, Leslie runs into Gordon immediately afterward, naturally, where she confirms that her fiance has moved to Gotham City with her. I still don’t fully understand why Gotham City was so much more appealing than the saccharine house that Leslie and her fiance were found in by Gordon at the start of the season, but maybe that question is answered a little bit towards the episode’s ending. 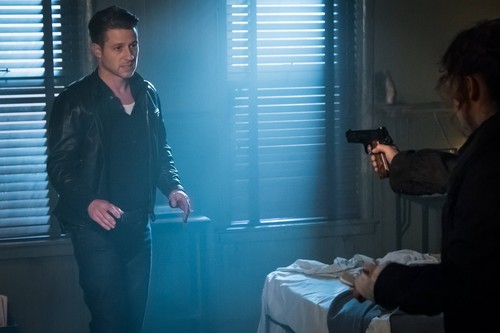 You see, for most of the episode, Leslie’s fiance is never named. When Gordon has to go to him for medical help, after looking for Alice inevitably goes bad, we learn that his name is Mario. Not a terribly common name in the U.S., but, alright. At the very end of the episode however, a seemingly routine dinner, whereupon Leslie is being introduced to Mario’s father, makes a very promising new story element very, very clear; Mario is Mario Falcone, son of former Gotham City crime boss, Carmine Falcone! This was actually a very well-executed and unexpected twist that the episode built up to very well. At first, Leslie being forced back into Gotham City felt too unrealistic, but considering that she somehow ended up engaged to a Falcone, fully aware of the family’s former criminal dealings, it suddenly starts to come together more.

We even got a pretty entertaining Penguin subplot this week. Penguin is another of Gotham’s best villains, but he’s so often mishandled in storylines that are beneath the quality of his character and performance. Fortunately, that wasn’t the case this week, as Penguin announces that he’s running for mayor, to unseat Mayor James, who was otherwise just going to get his old job back. Not only is this an interesting new direction for Penguin’s character, one that nicely references some of the alternate-universe takes on Gotham City from DC Comics lore, where Penguin had successfully become mayor of the city, but it also nicely invites the question of who the lesser evil is; Mayor James or Penguin? Penguin may be a violent criminal, but as he’s displayed several times, he is a violent criminal with a keen sense of honour. James meanwhile is a corrupt, untrustworthy liar, as has also been proven numerous times in the series’ former episodes. In a bizarre way, Penguin truly is the superior choice for mayor, even if pne would best come into this debate from the perspective of Gotham City remaining just as terrible a place, though likely no worse off than it was during the Galavan tenure. 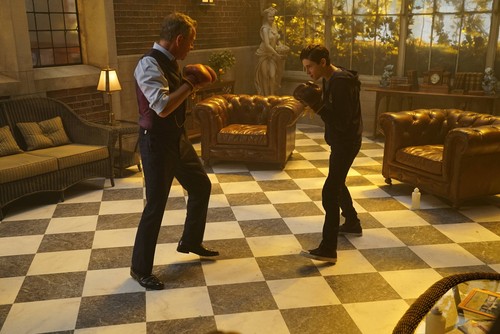 The slightly weaker subplot in this episode was the Bruce/Alfred subplot, where they have to decide how to deal with the clone of Bruce that stumbled into Wayne Manor. The clone’s character is kind of intriguing, but at this point, it just feels like he’s doing whatever the show’s script demands. At first, he’s friendly and amicable, and appreciates Bruce overruling Alfred’s demands to toss him out, but later in the episode, he displays an inability to feel pain and inexplicable superhuman fighting ability, yet seems scared of these abilities. Later still however, he cuts his hair to disguise himself as the actual Bruce Wayne, then goes to see Selina, whom Bruce previously shooed out of the mansion, for fear of her discovering the clone. The clone going off with Selina is what ends the episode, and frankly, it was a bit of a weird note for this otherwise standout episode of Gotham to end on. Is the clone dangerous or not? The show can’t seem to decide, and it had better decide soon.

Still, every other story element this week was in fine form, and the twist of Alice being another Hugo Strange experiment, one with infected blood that drives people into a zombified rage on contact (Tetch claims she was also born with some issue like this though), was also pretty good. Even the way that Penguin gets Nygma out of Arkham Asylum was fairly clever, if one has to slightly suspend their disbelief with how much city influence Penguin actually has. Thanks to a highly enjoyable new villain, and several promising new story developments though, “Look Into My Eyes” is definitely the best episode that Season Three of Gotham has pulled off so far. It also looks like the Mad Hatter is sticking around for the next little while too, finally existing as a strong way to put the darker new take on Gordon firmly under the microscope. Certainly, with Gordon capturing Alice towards the end of the episode, no doubt to turn over to the GCPD for some more quick cash, he’s made a powerful new enemy for both himself, and the future Dark Knight.