Most of the character work in this episode was quite good, though a few story elements were kind of hit-or-miss. As usual, Lucifer himself is at the top of his game, both inside and outside of his and Chloe’s latest case, still dealing with his mommy issues in spectacularly unhelpful fashion, and amazingly, he doesn’t even get Linda involved this week. Instead, Linda is left to deal with Amenadiel, whom she’s now fully livid at, even going as far as to hassle him in his fake office from when he was lying about being a therapist. 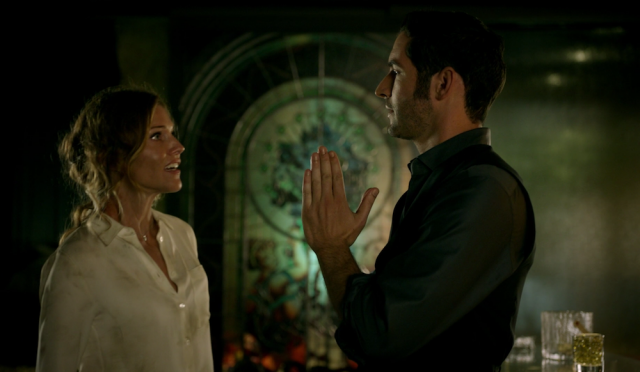 The arc with Amenadiel was crowbarred into a very busy episode, and it doesn’t feel fully realized in that respect. Linda suddenly confronting Amenadiel’s deception now feels kind of overdue, and it’s a thankless story carryover from Season One. The two make up by the end of the episode, though that wasn’t the real highlight. The end result of this storyline at least led to a pretty great little moment, where Amenadiel reveals his wings in front of a mirror, and realizes that they’re tattered and falling apart, leading to him breaking down in anguish. The sight by an angel of their very wings degrading must be pretty horrifying, particularly when Lucifer’s wings strangely seemed pristine before he burned them during Season One. Linda speculates that Amenadiel’s self-interest might be what’s causing him trouble, but obviously, there’s a big mystery here. Will Amenadiel be a true angel for much longer?

Even if Amenadiel had precious little screentime, Lucifer also foreshadowed trouble with Amenadiel’s character, since he tries to pray to summon Amenadiel several times, after his mother stumbles into Lux and finds him, though Amenadiel never comes. Something is clearly rotten on the show’s divine end, and it looks like this will be a pretty promising story development for Season Two. Of course, Lucifer does manage to carry on fine without Amenadiel though, once again stealing the show with his hilarious disregard for police protocol and any sort of respect towards Chloe’s wishes.

Even if Lucifer and the Mama Morningstar plot are getting off to a fairly solid start, it was during the case-of-the-week segments where the episode felt most clumsy and over-stuffed. We were sadly stuck with another boring case this week, one that was blatantly overshadowed by the rest of the story arcs fighting for attention. Working in the fact that Mama Morningstar possessed the body of one of the murder victims was kind of cool, but the resolution with this was very hasty and sloppy, and this week’s culprit was also disappointingly lazy, being some joker with a laughably flimsy motive that the episode tosses in right at the end, which is a telltale sign that the writers just didn’t care about this week’s murder mystery. With so much else going on though, maybe it’s difficult to blame them.

As for our first proper introduction to Mama Morningstar, it’s mostly good, though does range a bit in quality. Lucifer’s dialogue with his mother is consistently entertaining and interesting, though Maze is somewhat wasted in this episode, being a glorified babysitter that gives us a small window into how Mama Morningstar was treated in Hell, but she doesn’t really explain anything that viewers couldn’t already put together. The many jokes surrounding Mama Morningstar’s frequent misunderstanding of human custom and Earth interactions also ranged quite a bit. Some were funny, but some were just lame and childish.

At least Lucifer has a pretty heartfelt moment with his mother at the end of the episode though, where she confesses that Lucifer was only sent to Hell because of her, as a way of saving his life when God wished to destroy him, after the rebellion. This somewhat undermines the whole interesting bit of God having a plan for Lucifer that was brought up in Season One, but whatever. At least this does add a very interesting, tragic dimension to Mama Morningstar, even if the episode ends with her making a sly smile towards the sky, as if taunting God about something sneaky that she has planned for Lucifer. Is it good? Is it bad? I guess we won’t really know Mama Morningstar’s true worth or moral affinity until Season Two is over, but the journey should be a pretty good seasonal backbone nonetheless.

“Liar, Liar, Slutty Dress on Fire” did the best it could with so much plot to establish, even if the case-of-the-week really suffered because of everything else that was going on. The episode’s fun factor thankfully doesn’t diminish even at its weakest though, even if a lot of that fun was once again shouldered by the standout character of Lucifer himself. Amenadiel’s anguish and Mama Morningstar’s questionable intentions also highlight a nicely suspenseful hint that the show’s divine element is going to get another big shake-up over the course of the season. Now that the divine groundwork is laid though, hopefully Lucifer can get back to better mysteries next week.