After an onslaught of rumours, followed by a conspicuous teaser image posted by Rockstar Games themselves, it’s been confirmed this morning by Rockstar that Red Dead Redemption 2 is official, and it’s scheduled for release in Fall 2017, with its first trailer set to release this Thursday! Rockstar declined to comment further about the game for now, though they did complete the recent teaser art, which now includes some shadowed characters and a game logo. You can check that out below: 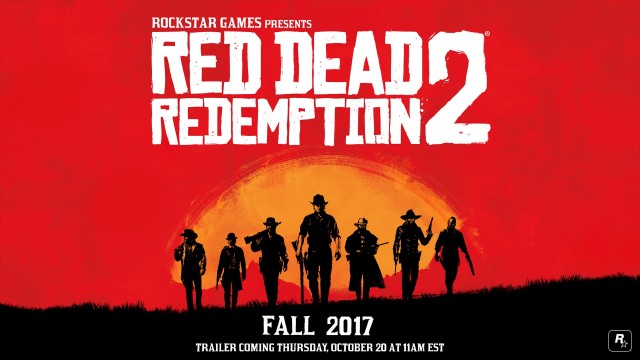 Rockstar’s Newswire website vaguely teases the monstrously anticipated sequel as an, “Epic tale of life in America’s unforgiving heartland, the game’s vast and atmospheric world will also provide the foundation for a brand new online multiplayer experience.” This online multiplayer experience is believed to be dubbed Red Dead Online, as appeared to be leaked this morning alongside Rockstar’s official announcement. 2010’s previous Red Dead Redemption also featured an online multiplayer suite, where players could duel with each other and compete in various Old West-style challenges, though the sequel will likely add new modes and challenges for competitive players.

Despite being billed as the second game, Red Dead Redemption 2 is actually the third game in the Red Dead franchise. The franchise began in 2004 with Red Dead Revolver, a linear action game/third-person shooter set in the Old West, which was originally going to be published by Capcom, before Rockstar Games bought the IP and assets in 2002, after they acquired developer, Angel Studios, now known as Rockstar San Diego. Red Dead Revolver enjoyed modest success, though its sequel, Red Dead Redemption, which re-tooled the franchise into a Grand Theft Auto-style open-world sandbox game set in a dying Old West of 1912, was lauded as one of the greatest games of the previous hardware generation, securing multiple Game of the Year wins, and universally glowing reviews.

Rockstar’s Newswire post seems to indicate that Red Dead Redemption 2 is solely in development for PlayStation 4 and Xbox One at this point, which may disappoint PC gamers that were hoping the franchise would finally make the leap to PC with its sequel. The original Red Dead Redemption infamously never received a PC version (nor did Red Dead Revolver), and only came to Xbox 360 and PlayStation 3, despite most of Rockstar’s games releasing on PC, and PC gaming fans of Rockstar constantly pleading for a PC port. Hope is not lost however, since, as Rockstar’s marquee Grand Theft Auto games have illustrated, PC ports of Rockstar’s major sandbox games tend to release many months, sometimes just over a year, after the console versions. It’s not certain, but a PC version of Red Dead Redemption 2 may still be made in the end, even if it’s quite likely that said PC version wouldn’t launch until at least 2018, a while after the game releases for PlayStation 4 and Xbox One towards the end of 2017.

Keep riding to Eggplante for all major news and updates on Red Dead Redemption 2.