After a double dose of Mad Hatter over the previous two episodes of Gotham, the show moved to spotlighting Penguin’s recent election as mayor of Gotham City in this week’s offering, “Anything for You.” As you can imagine in this city, Penguin’s election comes at very unfortunate timing, as the Red Hood Gang re-appears to terrorize Penguin and his city full of loyalists, while the other characters explore deepening mysteries such as the dead Alice Tetch and the vanished Ivy Pepper.

Viewers, obviously, know that Ivy isn’t gone, and is currently enjoying her new, sexy twentysomething self, though it’s interesting to see a second-hand impression of Ivy’s character, when more than one person doesn’t recognize the newly adult Ivy under their very noses this week, including Selina. While that sultry appeal was hanging in the background, this week’s episode focused on love, loyalty and companionship for the show’s various personalities, particularly in the wake of Penguin’s election as mayor, and for the most part, this made for another especially great episode of Gotham, which added several interesting new dimensions to its cast. 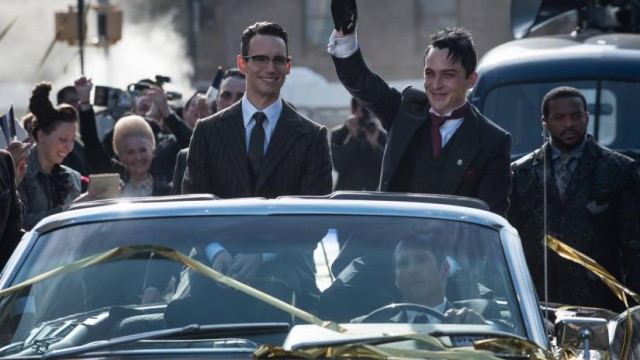 Fortunately, some good news on the romance front came with Gordon continuing to see Valerie Vale after all, after the show previously made it out as if Valerie was going to be shuffled off in favour of Gordon pining for Leslie again. Leslie is still around, though she’s mainly in the background this week, beyond providing a standout moment where she punches Nygma in the jaw for his murder of Kristen Kringle, even if it was accidental. Nygma walking back into the GCPD building as Penguin’s Chief of Staff was also appropriately grand and ominous, which allowed for an interesting spiritual chance for Nygma to re-assume his role as a forensic investigator, after Penguin puts Nygma personally in charge of apprehending the Red Hood Gang for the mayor’s office.

Even the very presence of the new Red Hood Gang, who merely don the look of the old gang and are largely impostors (though this fits with the eccentric Red Hood mantle as it’s passed around in DC Comics lore), worked its way into the themes of partnership throughout this episode. The new Red Hood Gang is constructed by Butch, who are using them as a fake obstacle that he plans to betray and take down himself, to win back Penguin’s loyalty from Nygma. The ongoing pissing contest between Nygma and Butch is feeling a bit childish at this point, at least for this episode’s first half, though maybe that’s somewhat the idea, especially when Penguin goes public with his love for his mother by erecting a statue of her on City Hall’s steps (which the Red Hood Gang defaces), tapping again on his ‘Mama’s Boy’ persona, which we haven’t seen nearly as much of since Penguin’s mother was killed and buried last season. 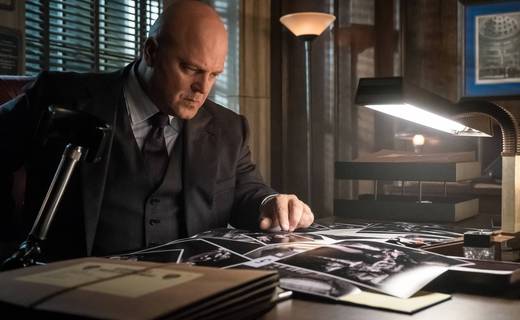 Naturally, the Butch/Tabitha relationship that sort of formed at the end of last season is also brought back up in this episode, despite Tabitha being more firmly buddied up to Barbara at this point. On this note, it was very cool to have Barbara finally point out the name of her and Tabitha’s bar in this episode, “The Sirens”, a great reference to the ‘Gotham City Sirens’ from DC Comics lore, an all-female villain team that normally consists of Catwoman, Poison Ivy and Harley Quinn, further foreshadowing that Tabitha is a blatant Catwoman forerunner for Gotham, while Barbara seems poised to fully become this show’s Harley Quinn stand-in before the end of the season. Perhaps the adult Ivy will join their staff soon? Anyway, Tabitha being taken hostage and used by Nygma in a scheme against Penguin, after Nygma deduces that Butch is behind the re-emerged Red Hood Gang, was a pretty good story turn, especially when Butch’s lingering feelings for Tabitha end up getting him in big trouble during the climax.

The scheming of Nygma, who learns of Butch’s involvement with the Red Hood Gang, whom Butch even murders in cold blood right as Penguin finds them ahead of schedule, was one of the best elements of this episode overall. Nygma perfectly sells the idea of turning on Penguin, seemingly out of a desire to avoid being a number-two man, but when Nygma takes Tabitha hostage and forces Butch to assassinate Penguin, only to then use that as an excuse to unmask Butch as the new Red Hood Gang leader at Penguin’s party, so Penguin can publicly show his commitment to being a mayor over a crime boss, that shows that Nygma’s love for Penguin is genuinely real. In fact, there’s even an implied homoerotic tension between the two when Nygma tells Penguin afterward that he would do anything for him, resulting in a lingering embrace. Putting the younger Penguin and Riddler in a homosexual relationship would certainly be a very bold and daring choice for Gotham, and one that probably won’t sit very well with a good chunk of Batman fans, but we’ll have to see how this relationship blossoms in the coming episodes. 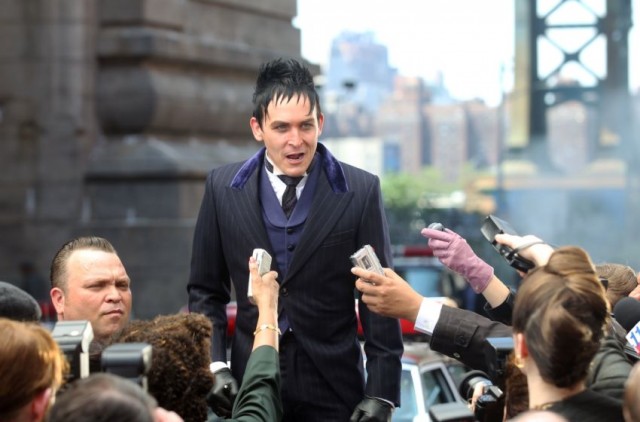 Bruce and Gordon also separately confront their affections for Selina and Valerie, respectively, even having a cute talk in a bar over it one afternoon in this episode. Bruce’s confession to Selina, and Selina’s confusing response to it, was a smart and well-executed moment that feels true to their future identities as Batman and Catwoman, while Gordon ousting a GCPD source from a dinner with Valerie so that they can have a date was also cute and cheeky in its own right. The episode even ends with Jervis Tetch, an effectively darker contrast to these budding light-hearted budding relationships, being seen at the end, kidnapping a woman that resembles his late sister, and forcing her to sit at a tea party table while he slits her throat, and leaves a threatening note for Gordon written from the blood. Looks like we’re back to more Mad Hatter chaos next week, but that’s just peachy, especially when the show took the welcome opportunity to bring up another twisted relationship’s fallout in an episode that effectively spotlighted many twisted relationships.

Now that Gotham has had some time to develop the finer plot points of Season Three, it really feels like the show is on something of a winning streak, without some of the uneven stretches that sometimes plagued the previous two seasons for now. “Anything for You” is a standout episode that wonderfully spotlights the eccentric relationship dynamics of most of the lead cast, demonstrating how their love and partnerships can work both for and against them in this crazy city. The only one firmly outside of the interpersonal storylines was Barnes, who is now invigorated and no longer in need of his crutch after coming into contact with Alice’s toxic blood, also teasing some great promise for later. With Mad Hatter returning to the spotlight next week, hopefully Gotham can continue the “Mad City” volume on this growing high note!

Gotham 3.5: "Anything for You" Review
Gotham shone with a standout episode this week, spotlighting the intricate web of twisted relationships between the main cast.
THE GOOD STUFF
THE NOT-SO-GOOD STUFF
2016-10-18
86%Overall Score
Reader Rating: (0 Votes)
0%