The Big Bang Theory built upon last week’s events with Sheldon and Amy in its final Monday episode of the season, before it moves back to its usual Thursday night timeslot next week. “The Hot Tub Contamination” challenged Sheldon to take more steps forward, as he and Amy inevitably descend into domestic conflict after mere days of living together in Penny’s apartment, while a rather weird subplot involving a hot tub unfolds at the Wolowitz house.

This week’s episode had a fairly surprising and satisfying final result, though sadly, getting there was often a chore, since the humour in this latest episode is a bit clumsy and weak for the most part. There’s a few standout funny lines here and there, but the show really felt off its game in terms of laughs this week, and that’s kind of a bummer. This was particularly evident in the Wolowitz subplot, which was completely phoned in with a bunch of canned, predictable jokes, while at the same time adding insult to injury by completely sweeping away the major lingering intrigue with Raj and his personal life from last season. 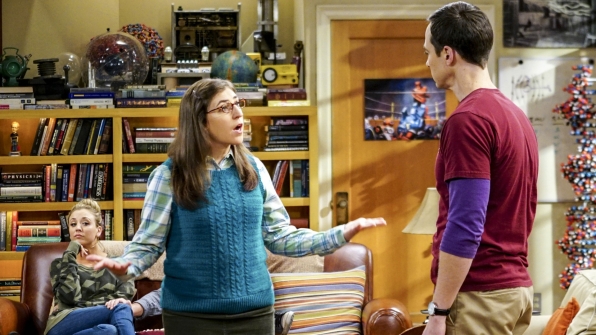 The canned jokes also carried over for the beginning of the Sheldon/Amy conflict, with Leonard and Penny forced to be mediators as the two find themselves not wanting to be around each other. Leonard tries to comfort Amy at his apartment, while Penny takes Sheldon out for a drive. This was actually not a bad idea, since it paired up the characters that you wouldn’t expect to be paired up for this storyline, and that did help to at least make some of the story material passable, even as the jokes felt uneven at best this week.

The debates between Leonard and Amy regarding Sheldon’s behaviour did have some amusing beats, though a lot of it still relies on Sheldon neuroses that viewers are already well familiar with. Truthfully, it was the Penny/Sheldon discussion that made the biggest impact in this episode, with the two surprisingly seeing eye to eye for the most part on things that annoy them about their partner, though this also helps Penny illustrate the idea of compromise to Sheldon. Leonard gets through to Amy just the same, though the episode did sort of take sides in the end, and painted Sheldon as the simple bad guy of the situation. This fits to a point, but it might have been especially interesting if Amy had caused some more trouble herself. 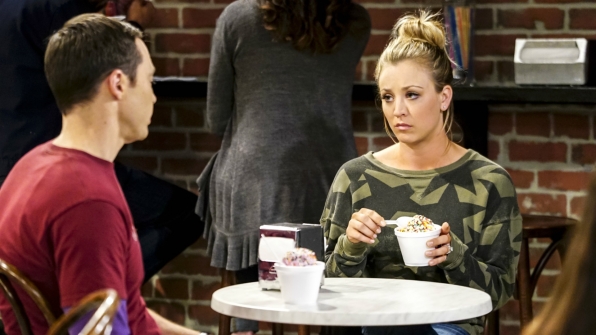 The reason why the Sheldon/Penny dialogue had such a big impact was a huge confession by Sheldon, when he tries and fails to pretend like he’s going to pick up another woman at an ice cream parlour. Sheldon reveals to Penny that he once walked in on his late father having sex with another woman while his mother was out, and the two never spoke of the incident afterward. This was revealed to be not only the reason why Sheldon struggles with sex and sharing living space with a romantic partner, but more importantly, why he developed the quirk of having to knock on a door three times, since the first knock is traditional, and the other two are a warning for occupants to be clothed. The Big Bang Theory does sometimes cherrypick these big Sheldon reveals to use in episodes where it knows that it doesn’t have much better material, but this little moment with Sheldon and Penny was still heartwarming, especially when Sheldon concedes to allowing Amy to share his toothbrush holder at the end of the episode. It really is moving in its own way.

As I said however, the Wolowitz subplot that also unfolded in this episode was rather uninteresting. The subplot involves a morning sickness-stricken Bernadette wanting to stay at home and not go on vacation with Howard, only to discover that Stuart and Raj both enter their house and use their hot tub while they think the Wolowitz’s are away. This entire subplot was literally Howard and Bernadette just watching Raj and Stuart, and doing nothing else, which got boring quickly, especially when their jokes were so lacklustre this week. Making matters worse is Raj taking the opportunity to tell Stuart that Emily and Claire are both permanently out of the picture, making the whole love triangle twist from Season Nine’s latter portions amount to absolutely nothing. 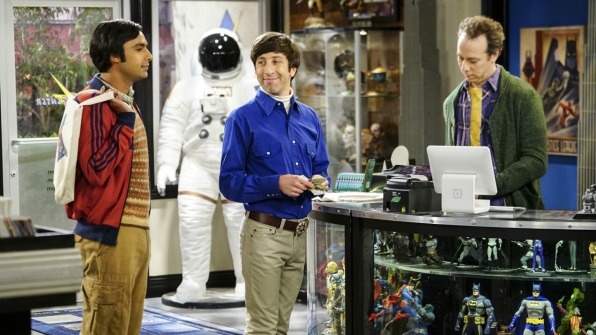 I’m aware that Claire caught Raj two-timing at the end of last season, but was that seriously enough to make her walk out when she and Raj clearly weren’t serious yet? I could understand Emily walking out, but not Claire. I guess the writers simply wanted Raj to be single again, so as usual, they swept any women in Raj’s life unceremoniously under the rug, as they constantly did with Emily over the past couple of seasons. It’s like the writers still have no idea what to do with Raj’s and Stuart’s romantic situations, so they made a subplot entirely referencing them both throwing up their hands with women, which only highlighted the writing not working well for these two all the more.

Not every joke was a bust, and the Sheldon/Penny interactions salvaged the episode to some extent, though for the most part, The Big Bang Theory struggled this week. “The Hot Tub Contamination” felt like a blatant filler episode that had the show clearly spinning its wheels, even by the standards of a CBS sitcom. The Wolowitz subplot bluntly referenced the writing shortcomings that Raj and Stuart have been suffering from lately, which doesn’t give said writing a free pass just because it’s admitted, and even if the Sheldon conflict was a bit better, it too suffered from too many telegraphed, weak jokes. The episode order clearly just had a space to fill before the show moves back to its regular Thursday night timeslot, but hopefully by then, it comes up with some fresher material beyond Sheldon being a nuisance and both Raj and Stuart being romantically pathetic. That’s not telling us anything that we don’t already know, and ten years later, The Big Bang Theory has to do better to maintain interest.