Supergirl’s move to The CW is continuing to pay great dividends in this week’s episode, “The Last Children of Krypton”, which caps off the Superman introduction arc, while giving both Kara and Clark their first genuine threat out of Project Cadmus. This is another standout episode for the show, providing a hard look at Kara’s personal development, as well as her earthly attachments, and how Superman seemingly upends Kara’s relationships in National City.

Kara’s exploits as Supergirl weren’t the only place that she was put through the wringer this week too. After Cat assigns Kara to working with a hard-nosed new boss named Snapper Carr, a Pulitzer-winning editor with no patience and even less affection for new hires, Carr simply claims that Kara doesn’t work for him, leading to Kara trying to run back to Cat to solve the situation. Cat, naturally tells Kara that she needs to, “Pull up her big girl pants” and solve the situation herself, which initially seems very blunt, though it’s quickly followed by a shocking revelation; Cat is going on a leave of indefinite absence, and trusting CatCo to James in the meantime.

The departure of Cat was a nicely emotional moment that the show delivered well, even if the storytelling logistics of Cat leaving CatCo for however long, likely for at least the season, were shaky at best. Cat’s reasons for leaving the major corporation that she helped build from nothing, even temporarily, which come from a place of simply wanting to do something different, don’t feel mature or inspiring as much as they do childish and oddly selfish. I get that having to find an excuse to reduce a character as huge as Cat from being a main personality to a recurring one, since Calista Flockhart can’t make the move to Vancouver for the relocation of the show to The CW’s stomping grounds, is no easy task, but even if it’s a losing battle, Cat’s reasons for disappearing from CatCo are pretty problematic. Moreover, was there seriously no one else in that building more qualified to be acting CEO than James? He’s only been working at CatCo for a year, and his prior experience was as a photographer! Why in the world would Cat appoint him to a responsibility that, logically, he should be nowhere near ready for?

Fortunately, beyond the troublesome sticking point of forcing an excuse to reduce Cat’s role, which isn’t the fault of the showrunners or writers, the rest of this episode worked to sublime effect on pretty much all counts. Kara and Clark predictably have lots of fun saving National City from various criminals, apartment fires and the like, but run into an impassable obstacle when the revived John Corben, now adopting his DC super-villain identity as Kryptonite-powered cyborg, Metallo, lures them to a bridge and does a proper number on them, especially Kara. This scene served as a nice nod to a comic cover for DC Comics event, Crisis on Infinite Earths as well, where Clark holds an unconscious Kara in his arms, even if it was just an Easter Egg referencing a pre-New 52/Rebirth Supergirl’s death during that comic book event. 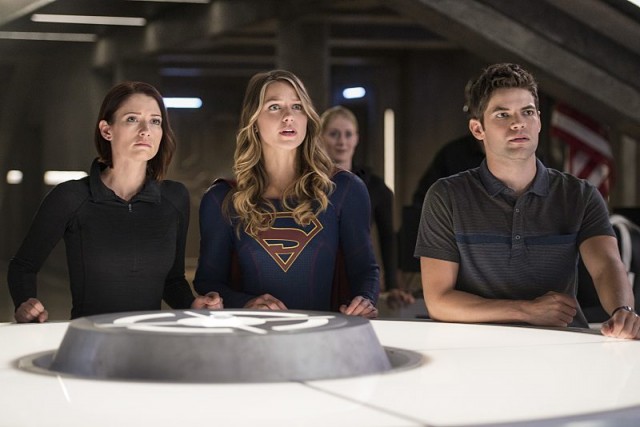 As Cadmus prepares a second agent to become another Metallo, this one attacking Metropolis, Winn gets to work trying to build a harness for Supergirl and Superman, so that they can resist the effects of the Kryptonite-powered cyborgs. This also comes as Kara suggests to Alex moving to Metropolis to be closer to Clark, which angers Alex, who reminds Kara of how much she sacrificed to look after Kara throughout her life. This candid debate between Kara and Alex made for one of the best scenes in the episode, and nicely contrasted with Clark and Hank/J’onn having to work out their differences, as they visit the Fortress of Solitude to try and analyze what Metallo is made out of. The Clark/J’onn interaction was also fantastic, especially when J’onn confesses that the reason he keeps Kryptonite on reserve at the DEO is because he was unprepared when the White Martians destroyed Mars, and he won’t be left unprepared against an angry god ever again. It was a sobering moment that nicely reminds us of J’onn’s difficult sacrifices to become a protector of Earth, just as Alex made similar sacrifices for her own post at the DEO.

This in turn made the episode’s climactic battle all the more exciting, where Kara and Clark trick Cadmus into thinking they’ve separated to their respective cities, only to have the two Metallo cyborgs run into ‘backup’, with a supersuit-powered Alex joining Kara in National City, while J’onn goes full Martian Manhunter to join Clark in Metropolis. The visual direction with the two fights shifting in and out of each other was great, and the way that both cyborgs were taken out was very satisfying, especially as renewed friendship between the heroes wins the day in very awesome fashion!

After the Metallo mess is sorted out, Clark returns to Metropolis, with J’onn, back as Hank Henshaw again, trusting Clark with the DEO’s Kryptonite cache, while Kara writes a detailed report of the Metallo attacks for Carr, eventually convincing him to let her work for him. Obviously, Carr having to be ‘convinced’ like this is kind of unrealistic, especially since he clearly wouldn’t have the authority to reject a legal transfer directly from the CEO of his company (the implication, I suppose is that Kara is considered ‘freelance’ for now, but that still doesn’t jive with Cat formally transferring her), but it’s still nice to have Kara come just a bit closer to winning Carr’s approval. It will be a long road ahead to getting Carr in her corner, but as Cat says, Kara has everything she needs to make that happen, and she’s sure to do great at her new reporter gig!

The episode ends with the mysterious alien from the crashed pod waking up and choking out Kara at the DEO, directly leading into the events of next week’s episode, so Supergirl isn’t going to be slowing down anytime soon! Moving this show to The CW really does seem to have been a smart move, since, “The Last Children of Krypton” is continuing to represent a fresher, tighter and more exciting rendition of Supergirl in Season Two. Kara’s growing maturity and independence was very fulfilling to see this week, and fortunately, the character development didn’t come at the expense of great action with the Metallo battles either. One likely won’t even lament the departure of Tyler Hoechlin’s standout Superman portrayal for now, since Kara herself is continuing to become more appealing than ever. Clark won’t be around to bail out his cousin next week though, and it looks like Kara’s alien problems are about to get worse before she can even take the fight to Cadmus!

Supergirl 2.2: "The Last Children of Krypton" Review
Supergirl continues to shine in its second episode for The CW this week, as Kara takes on an ambitious job transfer, while joining her cousin in the first serious battle against Cadmus forces.
THE GOOD STUFF
THE NOT-SO-GOOD STUFF
2016-10-18
88%Overall Score
Reader Rating: (0 Votes)
0%