In having to abandon the Malibu setting that served as the main backdrop for Season Two, The Last Man on Earth had to form a transitional story thread between the old location and the inevitable new camp that the survivors will find. This resulted in, “Five Hoda Kotbs” having the unenviable duty of being an unavoidable filler episode, despite chronicling the crucial journey that depicts our protagonists finding a new place to call home.

This episode still had a decent number of laughs, with Will Forte in particular working overtime to keep spirits high and gags amusing in an episode that didn’t otherwise have much in the way of interesting comedy to work with. The other actors still managed some standout funny moments here and there, but predictably, The Last Man on Earth wasn’t bringing its A-game this week. This led to an episode that did its job in shuffling the survivors to a new location, but one that also largely went through the motions by hitting a series of predictable snags, and relying on canned, predictable jokes to try to keep the levity going. 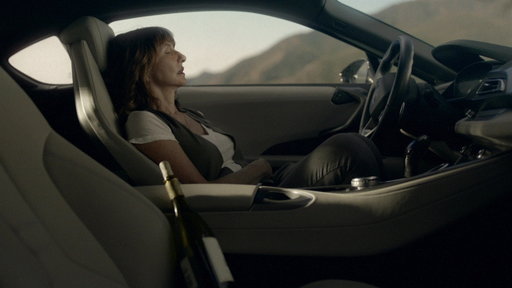 Unsurprisingly, the survivors quickly get antsy during their long road trip out of Malibu, and quickly start to get on each other’s nerves. The worst in the group begins to come out again, particularly as Gail once again questions Melissa’s sanity, and Phil predictably seizes the opportunity to be as upbeat and annoying as possible, in a forced, botched effort to get the group to relax. Carol and Erica even develop something of a ‘pregnancy rivalry’ with each other, as Carol makes demands of Erica in relation to her pregnancy, without realizing that Erica has actually been pregnant for even longer, and this was one of this episode’s better ideas that I’m surprised the show didn’t explore sooner.

Another interesting revelation in this episode came from some further character development for Lewis, namely in establishing that he’s a homosexual, and this leads to Phil trying even harder to please him, since Lewis supposedly represents the last of both the gay and Asian population in Phil’s mind. Phil’s constant singing got a bit grating after a while, even if that was probably the idea, but Phil still doing his best to try and entertain everyone, even as their cars all break down, and they’re all stuck together on a cramped, unpleasant journey, still makes his relentless stupidity manage to come from a charming, big-hearted place. Phil’s journey to keep everyone happy was especially uphill this week too, since the high tension means that even Carol and Todd find him insufferable in this episode, despite normally being firmly in Phil’s corner.

Eventually, everyone manages to make it to a remote patio furniture store, and the group tries to plan their next move. There were some better jokes in the interim, namely the reveal that the group’s original planned destination of San Francisco has been completely razed to the ground, but not by the usual nuking that many post-apocalyptic shows would rely on, and instead by Phil lighting a fireworks fire two years ago and forgetting about it. Another joke that worked well was Gail using a self-driving car, and then having it drive off when she gets out of it, which only got funnier when the survivors are stranded outside of their sole remaining vehicle, a prison bus, and the self-driving car drives past them. It’s no wonder that everyone is fed up by the time they reach the patio furniture store, all having different ideas of where they should ultimately settle next.

This tension eventually culminates in Gail deciding to leave the group, which comes as something of a shock, since everyone seemed to be equally at the end of their ropes throughout the episode. At first, it seems like the show’s ensemble is genuinely being threatened, and Gail’s departure coming towards the end of the episode does seem to make it very serious… But then Gail just decides to stay, making her entire threat pointless. That’s kind of frustrating, and makes one wonder why the show even bothered to make a big display of Gail saying she’s leaving. Where exactly does she think she’ll go with no car and no supplies anyway? Yes, she mentions Napa Valley, but how is she going to get there? Why doesn’t anyone else threaten to leave, if Gail speaks up about it? It just seemed like an emotionally false moment that was too quickly brought up and swept under the rug.

Fortunately, there is hope yet for the survivors, as Melissa eventually climbs a pile of haystacks and spies a great glowing light in the distance, which everyone proceeds towards. Apparently, the light belongs to a fully-powered business complex/shopping mall-like area, and the episode ends with everyone staring at their surprise discovery in awe. After some of the genuinely tedious bits of the road trip, it was fairly satisfying to see everyone’s struggles and bellyaching end up being worth it, since it looks like this is the new backdrop for the rest of Season Three at least. This reveal feels all the more fitting on account of the fact that The Last Man on Earth is taking next week off too, and won’t air its next episode until November, giving fans an extra week to mull over the many possibilities of the group’s new find.

The trip is no doubt going to be worth it, as a new location means fresh story possibilities and challenges, even if that means that the trip to get there has to hit a lot of familiar beats for road trip satire, even in a post-apocalyptic world. “Five Hoda Kotbs” was good enough, but it’s a very noticeable filler episode for The Last Man on Earth, shackled with the thankless duty of having to chronicle how the group is going to find its way to better storylines, since the show can’t just dump them in a new backdrop without explanation. The jokes were weaker this week, and many of the story turns didn’t amount to much, but at least the promising end of the journey made everything worth it. It’s also a relief that Gail isn’t ultimately leaving either, even if the show hinting at fracturing the group was predictably an empty threat.