With Superman having now flown back to Metropolis, Supergirl now once again rests entirely on the shoulders of its titular heroine in this week’s episode, “Welcome to Earth.” Picking up immediately where last week’s events left off, the formerly unconscious Kryptonian from the mysterious pod that Kara and Hank found makes a quick, tense escape from the DEO, right as U.S. President, Olivia Marsdin, played by 1970’s Wonder Woman star, Lynda Carter, arrives in National City to ink history-making, pro-alien legislation.

This episode’s subject matter about the, “Alien Amnesty Act” felt very smart and timely, considering that racial tensions in the U.S. are at an all-time high in the real world right now. Despite President Marsdin being made into a paragon of justice and solidarity throughout the episode, one that Kara naturally idolizes, the legislation was actually made into far more than an easy solution for allowing aliens to exist in the public of ‘Earth-CBS’, which I’m told is what the showrunners refer to Supergirl’s ‘bubble world’ that exists independently from the shared universe of fellow DC shows on The CW, Arrow, The Flash and Legends of Tomorrow. Some of the political rhetoric did chase material that is already better established and realized in Marvel movies and shows such as Captain America: Civil War, 20th Century Fox’s X-Men movies, and Agents of S.H.I.E.L.D., but the uneasy issue of President Marsdin’s Alien Amnesty Act did rightly bring up the balance of allowing aliens freedom and tolerance, at the cost of their ability to hide from potentially bigoted and fearful humans. 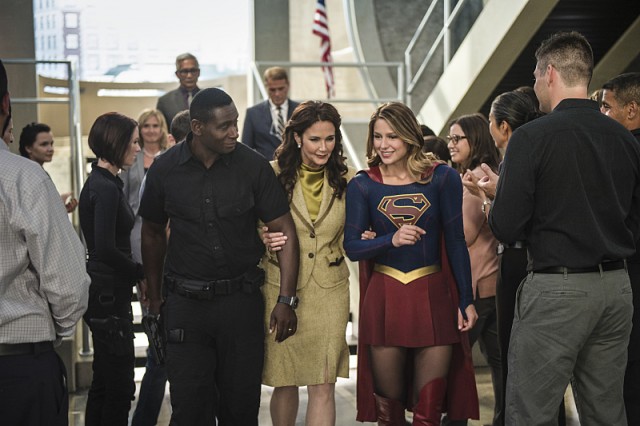 This episode gets off to a very charming start as well, and seeing Kara fawn over the chance to meet her beloved president gives you oodles of that fantastic Melissa Benoist charm that this show does better than it has any right to. Before long though, trouble inevitably finds President Marsdin, as her Secret Service team gets attacked by an alien with heat vision, forcing Supergirl to leap into action to protect the President. Kara fails to identify the attacker, but assumes that it’s none other than the escaped Kryptonian from the DEO, especially when a twist is soon after learned that the Kryptonian isn’t a true Kryptonian; He’s a Daxamite, a sect of Kryptonian separatists that served as rivals and enemies to the native citizens of Krypton.

If you aren’t an avid Superman/DC fan that might have already put the pod occupant’s identity together, it’s officially revealed in this episode that he is Mon-El, an established Daxamite hero from DC Comics lore, who has ties to Superboy and The Legion of Super-Heroes most notably (this might build on the Legion teases that already cropped up in several spots during Supergirl’s first season on CBS), and is a confused refugee at this point on Supergirl. After Supergirl nabs Mon-El while he tries to contact his home planet, she identifies him as the apparent attacker of President Marsdin (despite having no proof, and knowing that Kryptonians aren’t the only aliens with heat vision powers), leading to the President believing that it’s safe to go through with the signing of the Alien Amnesty Act… Until the mystery alien attacks again, and it’s quickly revealed that the culprit isn’t Mon-El, which was a bit predictable, honestly.

Playing with Kara’s anti-Daxamite stance, something drilled into her during her life on Krypton, was a very cool way to build off of the whole alien debate that founded this episode. This got all the better when Kara has her first big interview for Snapper, with Lena Luthor as the subject, and learns that Lena is trying to outfit the world with alien-detecting devices that will make her company a fortune, even if they can somehow be tricked into thinking Kara is human and also remain functional by Kara zapping them with heat vision (huh?). Snapper rejects Kara’s initial draft from the interview, saying it’s far too biased and pro-alien, forcing her to rewrite it, and forcing her to confront the fact that she’s not yet good at being an objective journalist. The irony of Kara falling victim to anti-alien prejudice within her Supergirl identity was very effective when it played off of this, and it led to an especially satisfying new step of maturity and development for both of Kara’s identities by the time the episode was over.

On the negative side though, the ultimate culprit of this episode was kind of lame. I originally thought that the attacking alien was supposed to be a new live-action version of Volcana, a villain made up specifically for Superman: The Animated Series almost twenty years ago (and one that has pretty much exclusively stayed in the DC Animated Universe for now), but according to The CW, she’s actually supposed to be a new, re-tooled version of highly obscure DC villain, Scorch. Why the show didn’t use Volcana, I have no idea, since Volcana would have made a lot more sense, and has a previous connection to Supergirl and Superman from the DC Animated Universe, but whatever. In any case, Scorch’s motivations of attacking the President to stop the act signing because she doesn’t want to reveal herself to the world was pretty weak and under-developed, especially since she blatantly revealed herself to the world already by standing in the middle of a crowd and trying to burn the president with heat vision! She’s incredibly conspicuous too, which makes one really wonder how Kara missed her the first time when Air Force One landed. Was she really that distracted by President Marsdin?

There were several smaller subplots in this episode too, making it pretty busy overall, but it was nonetheless a great episode that proved very satisfying to watch in almost all respects. One slightly weaker subplot involved James getting pushed around by Snapper, and having to eventually stand up for himself by reminding Snapper who is boss, which should have been obvious, and further highlights how illogical it is that James is now running CatCo. Better realized were the introduction of Maggie Sawyer, a recognizable DC Comics cop with connections to both Superman and Batman in the printed panels, who becomes something of an uneasy ally to Alex, and an ending scene with Hank where he goes full Martian Manhunter in the alien bar where Alex and Maggie look for tips on Scorch, before discovering that the bartender is another Martian! This is a very exciting tease for next week, since the bartender identifies herself as M’gann M’orzz, a.k.a. fellow Martian superhero, Miss Martian from DC Comics lore! This somewhat deflates J’onn J’onzz supposedly being the last surviving citizen of Mars on Earth-CBS, but perhaps having a second Martian on the series will add some interesting new dimensions to Hank’s/J’onn’s character, as well as possibly adding some new Martian story elements to the series later this season.

Supergirl wasn’t quite as superb in this episode as it’s been in this season’s previous two episodes, but it still did very well this week, and the series still seems to be flourishing as effectively as ever on The CW in its third week within the show’s new home. This was a fairly packed episode with plenty of efforts to establish later story elements for down the line in Season Two, but the entertaining introduction of Maggie Sawyer, the proper establishment of Mon-El, and the revelation of Miss Martian all lead to pretty promising developments to look forward to this season. It’s too bad that this episode suffered from a dull villain-of-the-week most notably, but with the Alien Amnesty Act now seemingly going ahead, complete with a surprise reveal that President Marsdin herself is also an undercover alien towards the end of the episode, it looks like the alien presence on Supergirl is about to get a lot more blatant for National City, and the world at large!

Supergirl 2.3: "Welcome to Earth" Review
Supergirl set the stage for a season that promises an enhanced alien presence this week, within a busy, but strong episode that had no shortage of appealing story threads.
THE GOOD STUFF
THE NOT-SO-GOOD STUFF
2016-10-25
85%Overall Score
Reader Rating: (0 Votes)
0%