It was another tight episode of claustrophobic action on Agents of S.H.I.E.L.D. this week, as Coulson and crew close in on Dr. Morrow, right as their ghostly foes start making their mark on Morrow’s prison. “Lockup” had no shortage of thrills and excitement, though it didn’t totally stick the landing with its Inhumans-focused subplot, despite an interesting new development being brought up with Jeffrey Mace.

With S.H.I.E.L.D. now being aware of the Darkhold and what the ghosts want with it, they know that their next step is to intercept Dr. Morrow before Lucy Bauer and her fellow specters reach him. A visit to Lucy’s husband also ends abruptly, as the scientist dies in his hospital bed, with things looking grimmer than ever for the good guys. As Coulson said in the previous episode, the team now actively needs the aid of Daisy and Robbie, even though Mack initially objects to Robbie coming along to the prison, due to the obvious concern of Ghost Rider wandering around a high-security prison full of violent criminals. 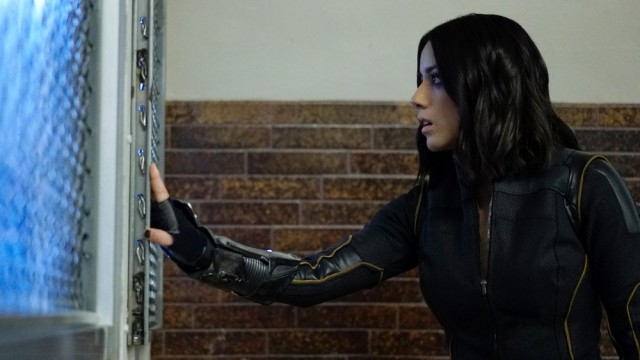 The real problem however is that Lucy gets there first, and this leads to both the warden and the guards being infected with extreme fear, and left in a state of panic by the presence of Coulson and May. Fitz manages to put together a cure for the ghosts’ affliction, while also providing overwatch on the prison op, but that still puts S.H.I.E.L.D.’s remaining forces to the test, as they must rescue Coulson and May from the panicking staff. Even when that seems to go down without many issues though, Lucy releases an entire cell block’s worth of prisoners, creating even more obstacles for S.H.I.E.L.D. to contend with!

Most of this episode was heavily punctuated by several very impressive action scenes, as S.H.I.E.L.D. must deal with the inmates and staff without casualties, and without the advantage of Daisy’s Inhuman abilities, due to the extensive damage they’ve caused to her muscles and bones. Easily the best action scene came from a lengthy, large-scale fight sequence where Daisy takes on a whole horde of prisoners single-handedly in the cafeteria, again, without the aid of her powers. Coulson and May eventually bail her out before she’s killed, but just seeing Daisy take out so many criminals without needing her powers was both badass and incredibly thrilling to watch!

Mack, meanwhile has his hands full with Robbie, as they find themselves coming into contact with a few of Lucy’s ghostly cohorts within the boiler room. Mack is initially infected, though this doesn’t mean much when Fitz has already prepared a quick, easy cure for him (well, easy beyond the horrible spine pain from having to inject it directly into the brain stem), and Robbie can destroy the ghosts with a mere touch. It might have been more interesting if Mack had given away his dose of cure to perhaps innoculate the warden or a crucial guard or something, and then Robbie might have had to split off from him and operate unattended. It would have been a better test of both of their characters, and would have made the episode’s conclusion make a lot more sense. 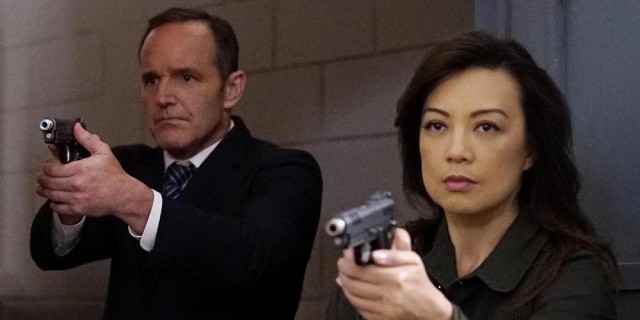 Things inevitably spiral out of control when Robbie is entrusted with the care of his uncle (oh come on, seriously?), and Robbie, like an idiot, tells his uncle to run ahead to extraction while he deals with a loose end. Said loose end is the last remaining member of the gang that shot up and burned the car that Robbie and Gabe rode in, which led to Gabe’s paralysis, and presumably, Robbie’s transformation into Ghost Rider, somehow. The allegedly reformed gangster tells Robbie the valuable tip that their attack was a paid hit by an unknown person, not a random act of violence, but this isn’t enough to save him from Robbie’s fiery wrath, which quickly scares the prisoners back into their cells. Everyone at S.H.I.E.L.D. then reunites, and realizes that, surprise, Dr. Morrow has been taken by Lucy. Like I said, it felt like Robbie too obviously dropped the ball here, and Lucy winning came down to questionable stupidity, rather than circumstances that were truly beyond S.H.I.E.L.D.’s control.

As for the subplot, this involved Simmons finally having to submit to her polygraph test, right as Jeffrey has to have a televised debate with Senator Nadeer. Jeffrey bails Simmons out of her shaky polygraph results, making her believe that she’s in the clear, and this gives Simmons the opportunity to help control the Inhuman message a little more, by helping feed Jeffrey science facts about them. This was kind of cool to see, as Simmons has grown a lot since her hate boner for powered people in Season Two especially, and it was equally cool to have Jeffrey finally upend the debate by confessing to the world on live television that he is an Inhuman himself, and that there is no better person to shepherd S.H.I.E.L.D. and the world into Inhuman management and tolerance. This also sees Jeffrey win a surge of approval ratings, particularly after he’s demonstrably made out to be a hero, apparently being present in the background during the Vienna bombing that occurred during the events of Marvel’s most recent movie release, Captain America: Civil War, where he saved some unknown woman’s life.

Where the subplot becomes a bit of an issue though is that it too quickly undoes this goodwill, by having Jeffrey nonetheless come after Simmons for keeping secrets, only for Simmons to later strike back by saying that she knows a big secret of Jeffrey’s; He never saved the woman that the media claims he did during the Vienna bombing, and telling the truth on a polygraph might have that uncomfortable truth come out. It’s shrewd and effective thinking by Simmons to get out of the sticky issue of having to confess knowledge of Aida to S.H.I.E.L.D.’s higher-ups, but this hurts the image of Jeffrey, and makes him out to be another untrustworthy S.H.I.E.L.D. face, even after HYDRA has supposedly been wiped from the Marvel Cinematic Universe at this point. 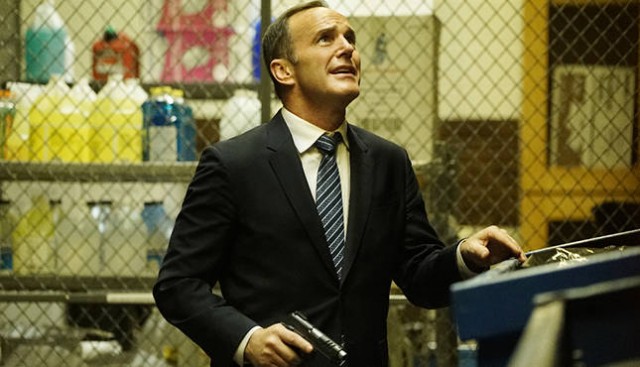 Compounding this issue further is that Jeffrey has a secret meeting with Nadeer in an epilogue scene, and quickly allows Nadeer to blackmail him, after Nadeer somehow gets ahold of security footage of both Daisy and Robbie from the prison almost immediately, which makes Jeffrey look even worse. I have to say though, it would be cool if the mystery woman that Jeffrey apparently lied about saving in Vienna turned out to be Simmons herself. This would explain Simmons’ special treatment, and also provide a cool way to subtly tie Agents of S.H.I.E.L.D. more deeply into the Marvel Studios movies, by having Simmons herself be present at a major event from Captain America: Civil War, even just off-screen, which would have a lot more gravity than the presence of Jeffrey Mace.

Despite some over-quick shadiness coming out with Jeffrey at this point, which feels tossed into a season that’s already very busy juggling many large-scale story elements, Agents of S.H.I.E.L.D. still delivered another exciting offering in this week’s episode. “Lockup” provided a cool prison break scenario of sorts, and finally gave us a few more badass sequences with both Daisy and Ghost Rider most notably. With the revelation that Robbie Reyes was a target even before he became the Spirit of Vengeance, it seems like the series is going to go deeper into the Ghost Rider backstory for the MCU in next week’s episode. That’s good, since it will best help lay the groundwork for the impending movie release of Doctor Strange, so if it’s true that we can’t trust Jeffrey Mace, maybe the show should worry about that problem later.