Well, finally! It’s about time that Arrow got back on its feet, and this week’s episode, “Penance” finally has Season Five hitting a great stride, with a standout storyline that gives Oliver’s team their first serious crack at independent action, while Oliver himself resolves to break Diggle out of prison. A subplot has Felicity dealing with the implications of confessing to Ragman that she redirected Damien Darhk’s nuke to Havenrock last season as well, and this also proved to be a satisfying step for both of their characters, as Oliver’s new crew continues to develop.

The title of the episode really says it all, since this episode was all about exploring the idea of making mistakes and atoning for them, which it explored on multiple fronts. Right from the beginning, Wild Dog’s latest mistake leads to Team Arrow almost missing reclaiming some stolen tech from Kord Industries, which was on its way to Tobias Church. This merely leads to another big mistake later though, when Oliver has Lance directly see to the transfer of the tech into the SCPD’s evidence locker, only for Lance to discover that the evidence was rigged to bomb an entrance into the locker so that Church and his goons could steal weapons, with Lance barely escaping with his life. 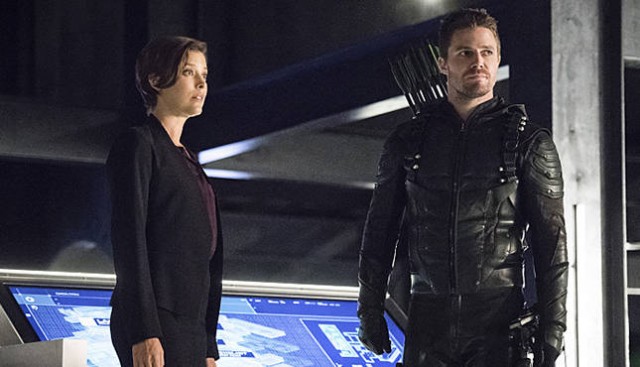 The penance idea was also brought front-and-center with Diggle, and the desire for Oliver to suddenly throw the constraints of the law to the wind, more so than usual, to break Diggle out of military prison. Felicity is predictably in adamant opposition to this idea, and refuses to help Oliver with the op, even going as far as to sic the rest of the vigilantes on him, though they merely take a beating and fail to stop Oliver and Lyla from breaking Diggle out of jail. This is further hurt by the team’s loss of Ragman, who decides to quit after deciding that he can’t work with Felicity, since she’s a constant reminder of what he lost when Havenrock was nuked by Genesis, even if he recognizes that it wasn’t Felicity’s fault.

The idea of temporarily separating Ragman from the rest of the team was something that actually worked very well in this episode. Ragman is easily the most powerful member of Team Arrow at this point, thanks to his enchanted costume, and removing him from the rest of the more ordinary crew, while Felicity was also removed from Oliver’s plot, allowed the heroes to show their appealing courage and determination in the face of being incredibly outgunned by a pervasive, shadowy element that is greater than them. When Arrow captures this feeling, that’s when the show really shines, and it’s great to see the series once again grasping its finest recipe in this episode! The reconciliation between Felicity and Ragman was also very heartfelt, as they both share the idea of penance and honouring the dead, which is enough to convince Ragman to rejoin the others. It might have been best if Ragman had spent at least one more episode away from Team Arrow, since it felt like the consequences of him leaving were swept under the rug pretty quickly in the end, but the progression of this storyline was still pretty great overall. 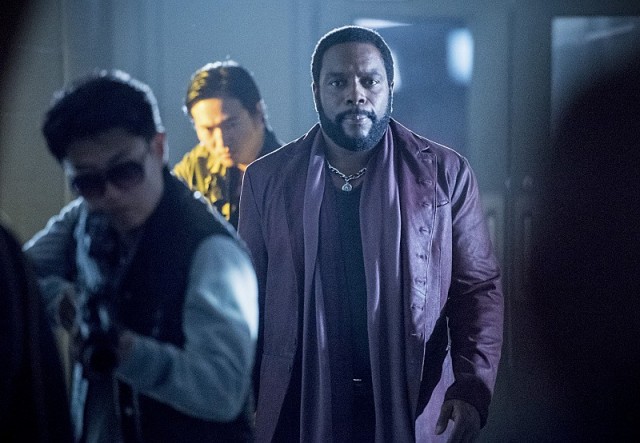 The neat heist element of this episode also worked very well in Oliver’s storyline, providing the rare opportunity for Oliver and Lyla to work together in order to get Diggle back. Even without Felicity, Oliver still proves a force to be reckoned with, as he quickly and efficiently makes his way through the prison, manages to convince Diggle to leave with him, and the two are then whisked away by Lyla on what appears to be a DC Television Universe version of Skyhook, the military technology that Batman utilized in one pivotal scene in 2008 movie, The Dark Knight. Whether it was an intentional Easter egg by DC or not, it’s very cool! Also very cool was Diggle and Lyla hiding out in the old H.I.V.E. lair at the end of the episode. This is surprisingly smart, since it’s true that no one would ever think to look for Diggle at the ruins of H.I.V.E., and it was equally smart that the show didn’t immediately place Diggle back on Team Arrow as if nothing had happened, allowing the new team to continue developing without his intervention.

The new team also has their first serious success in saving an important sect of Star City citizens this week, as Tobias Church decides to hit Oliver’s Anti-Crime Unit, and with Oliver stuck breaking Diggle out of prison, Wild Dog, Artemis and Mister Terrific have to go without him, with Ragman fortunately tagging along at the opportune time. Felicity begrudgingly oversees everyone, and this leads to a pretty exciting climax that has the junior vigilantes successfully rescuing the targeted cops, driving away most of Church’s forces, and even improving D.A. Chase’s negative opinion of vigilantes, which should help lay the early foundations for Chase possibly becoming the DC Television Universe rendition of Vigilante down the line. It was also satisfying to see the team’s first effort not be a clean, sweeping success either, as Curtis ends up taking a knife to the back, and worse still, Rene is captured by Church, being tortured as the episode ends, while Team Arrow tries to devise a way to get him back. Maybe this will be the hard lesson in humility that Wild Dog seriously needs to learn! 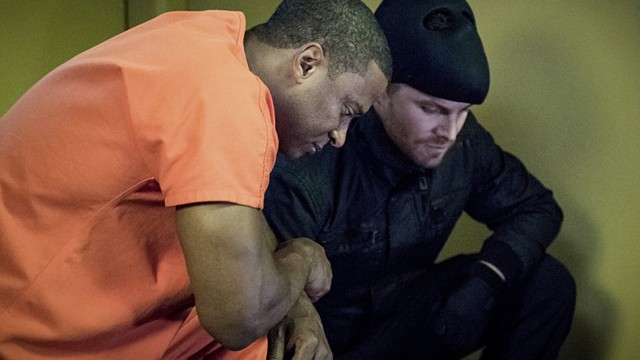 This week’s flashbacks were also pretty great for the most part, as Oliver is given his final Bratva induction test, namely by posing as a disorderly drunk to make contact with an agent of Kovar in prison. Oliver gets the info he needs, then kills the man on the mere order of Anatoly, despite having misgivings about it. In doing this brutal act however, Oliver demonstrates that he unquestioningly trusts the Bratva, and this has him fully become a member of the Russian mafia. Despite the tests being over though, I’m getting the unmistakable sense that Oliver’s dangers and challenges in the Bratva are only just beginning here…

Arrow still has quite a bit to prove before it can start safely being compared to the superior likes of The Flash and Legends of Tomorrow, and hell, even Supergirl is firmly leaving it in the dust now, but, “Penance” represents the best that this show has been in quite a long time. Every story element was realized nigh on perfectly this week, and even if it would have been nice to have the Felicity/Ragman conflict stew a little longer, at least the show isn’t rushing to force Diggle back onto Team Arrow either. The capture of Wild Dog also not only provides another interesting challenge for the team, but further helps Tobias Church become an even more imposing and impactful villain. Whether Arrow can sustain this quality over more than one episode in succession is a bigger question, but it’s an outcome that I would sure love to see finally come to pass again!

Arrow 5.4: "Penance" Review
Arrow finally took several great strides this week, with an enjoyable and dramatically satisfying episode that was one of the show's best in a long while!
THE GOOD STUFF
THE NOT-SO-GOOD STUFF
2016-10-27
92%Overall Score
Reader Rating: (0 Votes)
0%