Legends of Tomorrow noticeably slowed in last week’s competent, but fairly by-the-book episode, though this week, the show once again produced an episode that was more unexpected and exciting. “Abominations” brought the Legends to Mississippi, 1863, smack in the middle of the American Civil War. Another time aberration has occurred, this time due to the accidental influence of a time pirate, who crashes into the era with a deadly stolen virus that he accidentally unleashes, creating a small army of Confederate zombies.

The concept of this episode sounds more than a little ridiculous, to be sure, but it’s surprising how cleverly this episode was executed in terms of capitalizing on the time period, and building on the lead ensemble. After first discovering the zombies, the group narrowly fails to save a slave messenger that was meant to deliver crucial plans to the Union, leaving Jefferson as the only choice to finish the job, since he’s the only black man on the crew. Since the Legends can’t abandon the time period to zombies, which ends up fracturing history so that the Confederacy wins and the U.S. splits into two halves, they have no choice but to send Jefferson into danger by himself, to retrieve the Confederate intel, and bring it to then-General Ulysses S. Grant. 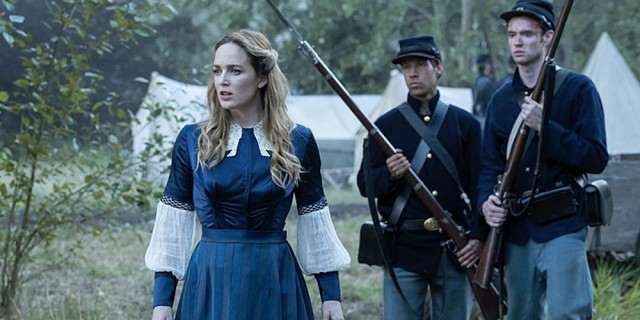 Amaya accompanies Jefferson after some arm-twisting, and this allows the two black members of the current Legends roster to get a first-hand account of slavery atrocities. It was legitimately surprising to see Legends of Tomorrow so bluntly touching on a very uncomfortable part of American history, as the show didn’t pull any punches when it came to the torture and cruelty inflicted on slaves during the Civil War. It’s commendable though, especially when it creates an interesting conflict with Jefferson, who convinces Amaya to avoid disturbing the atrocities, lest they cause a potentially damaging ripple that alters history.

Jefferson nonetheless ends up captured though, witnessing first-hand just how bad black citizens were treated during this time period, but the combination of Amaya stepping up and the other slaves demonstrating their spirit is enough to renew his conviction to finish the job. It’s a little hokey at times, but this is very inspiring, and Jefferson getting the chance to be a hero without having Martin close by made for an effectively dramatic and tense turn for his character. Jefferson even makes sure that history is preserved by passing himself off as the fallen scout, ensuring that the Civil War ends exactly the way it should. Jefferson has definitely become a lot more appealing now than he was in the early reaches of Season One, and his increased maturity and spirit was put on great display throughout this episode. 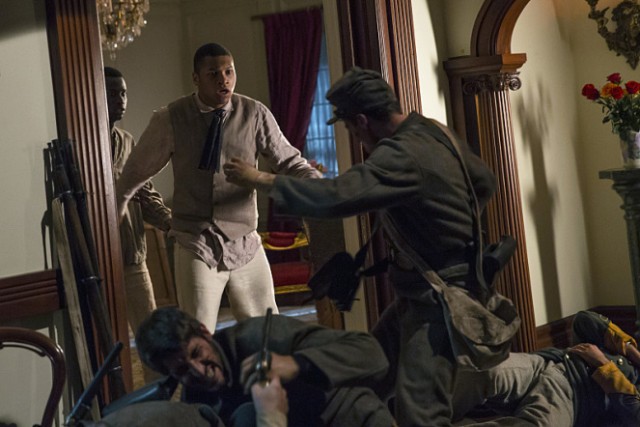 While Jefferson and Amaya try to complete the fallen scout’s mission, Sara and Nate decide to help Grant and the other Union soldiers fend off zombies. This continues to have Sara proceeding along nicely as the new leader of the team, as she manages to effectively save the bulk of the soldiers from the infected, while Nate utilizes his new abilities to shield himself from an explosion that takes out the rest of the zombies. Nate’s abilities conveniently working whenever he needs them to still comes off as a bit too much of a Deus Ex Machina, and as I said, it’d be nice if the show started better establishing some rules for how these abilities work. Still, at least utilizing Nate to destroy the zombies was fundamentally clever, albeit also a huge gamble in practical terms.

Likely the best storyline in this episode was the one that didn’t even unfold in the era proper, and simply took place on the Waverider. Now that he no longer has a suit, Ray is benched by Sara until further notice, leading to Ray humourously trying to remain useful by overdoing historical facts and bagged lunches. When Mick ends up being bitten by a zombie during their initial discovery however, Ray has to try to make him a vaccine, which only accelerates Mick’s condition and immediately turns him, forcing Ray and Martin to figure out their next move. Adding to the trouble is that Martin is actually terrified of zombies, and has a hard time getting his thoughts together when it comes to how Mick can be fixed.

This was a great subplot, not only because it offered a very unique story for Legends of Tomorrow, but also because it allowed Ray to prove how he’s still indispensable to the team, even without his Atom suit. Ray may have botched the cure the first time, but he does eventually synthesize it later, while also keeping Martin under control to boot. Martin being the one to actually spray and cure Mick was also satisfying, and Mick waking up to ask if he was trying to kiss the professor was actually very funny. The zombified Mick knocking out Ray and not munching on him felt very illogical, which was the one sticking point in this otherwise great subplot, but this was both a creative and a fitting way to make use of the characters that didn’t fit into the other storylines that unfolded in the Civil War proper this week. Best of all, Mick giving Ray the late Captain Cold’s Cold Gun was incredibly heartwarming and exciting, and the idea of Ray becoming a spiritual Captain Cold successor and ally to Mick is one with quite a lot of potential!

“Abominations” defied its silly concept with lots of surprisingly smart storytelling, even if it had to strain a bit to get its resolutions into place. Legends of Tomorrow has often been surprisingly candid about human history, despite normally being a light-hearted time travel show with DC superheroes in it, and that came to the forefront more than ever in this week’s episode, which had the show exploring darker and more uncomfortable territory than it ever has before. This all worked to create an episode that was more impactful and gripping than it had any right to be, while doing a good job of furthering all of the Legends’ individual arcs. Some of the lost momentum from last week was restored in the end, and we seem to have Legends of Tomorrow back in top form once again!

Legends of Tomorrow 2.4: "Abominations" Review
Legends of Tomorrow drops zombies into the Civil War this week, in one of the most outlandish plots yet, but also a plot that was smarter and more impactful than it has any right to be.
THE GOOD STUFF
THE NOT-SO-GOOD STUFF
2016-11-04
87%Overall Score
Reader Rating: (0 Votes)
0%