After noticeably suffering over the past few weeks, it was nice to see The Big Bang Theory finally gain something of a foothold again in this week’s episode. “The Veracity Elasticity” finally offered some quality material for most of the lead characters, while also upping the quality of the humour considerably. It’s the kind of fresh and interesting episode that this sitcom has been starved for throughout too much of Season Ten so far, and by the end, big implications are laid out for Sheldon and Amy in particular.

It may have been a smart decision to nudge the Wolowitz’s and Raj into the background this week, with two remaining plots that unfold from the perspectives of both the Hofstadter couple and Sheldon/Amy. Howard and Bernadette still play somewhat of a role in proceedings, though primarily as catalysts for the two storylines, which run parallel to each other in a way. They also provide a welcome switch of the women being the ones to make trouble this week, while the men explore the rare irony of being in a power position by knowing of the womens’ transgressions before they confess them.

Between the two storylines, the Sheldon/Amy plot definitely had more weight, but the Hofstadter story still offered a clever selection of quality jokes. Early in the episode, it comes out that Amy’s apartment has actually been ready for weeks, smartly explaining why the show has taken so long to fix the place back up, and that Amy has been lying to Sheldon about the apartment’s condition, so that she can prolong living with him. Leonard tries to fend off some questionable advice from Howard, advising Sheldon to avoid disclosing that he knows about Amy’s lie to use it as a power move the next time he’s in trouble, though this nicely gets turned around on Leonard, when Howard proves his point by telling Leonard that Penny has been secretly tossing his collectibles into storage, slowly enough so that Leonard doesn’t notice.

Leonard discovering that Howard is very much correct, noting all of his geek paraphernalia that is now missing as he wanders around his apartment, was quite funny, and Leonard’s seemingly trivial concern contrasted nicely with Sheldon’s more valid one. When the truth finally comes out, Sheldon finds that he can’t hide knowing about Amy’s lie for very long either, leading to a highlight joke where Leonard and Sheldon get confused and try to resolve the situation by speaking Klingon to each other, only to have Penny and Amy respond by speaking in Amy’s made-up secret language, which was an excellent and hilarious callback to Amy’s first moments with Penny many seasons ago! The only sticking point here is that the women being caught in lies is very easily forgiven, with Leonard and Sheldon both unrealistically shrugging it off, possibly because of the constrained half-hour space, which still has to explore some pretty big twists for Sheldon. 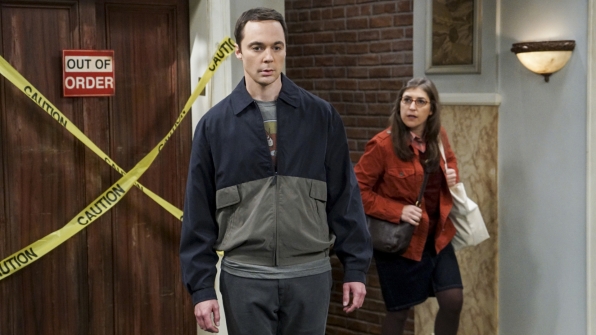 Once Sheldon realizes that Amy enjoys living with him, he’s forced to contemplate the possibility of moving in with Amy permanently. This snowballs into the two realizing that they don’t even have to live in Pasadena if they don’t want to, which I can see being a catalyst for a potential series finale, should CBS fail to renew The Big Bang Theory for any new seasons after this one. That end of the conflict is dropped in the end, though Sheldon is nonetheless confused about his territory now, culminating in a great visual metaphor when he’s caught between the two apartment doors, and recounts a philosophical metaphor to Amy about a donkey caught between two equally appealing bales of hay that is paralyzed by indecision and starves to death. Amy manages to get Sheldon inside Penny’s old apartment again eventually, though we still get some great anxiety-fueled humour from Sheldon’s woes, most notably a hysterical dream sequence where he imagines his old room being converted into a sex dungeon for Leonard and Penny.

There isn’t much else that goes on in this episode, since the rest of the leads don’t play into this week’s plot after kicking it off. Maybe trimming the fat and offering a more tight, pivotal new direction for the other characters was the right call though, like I said, since this led to a much better episode than The Big Bang Theory has managed in recent weeks. “The Veracity Elasticity” restored some of the humourous and creative spark that the show seems to have lost over its past few episodes, and the big decision being laid out in front of Sheldon is a great new step for the series. It feels inevitable that Sheldon will eventually have to move out and live with his girlfriend, but so far, the journey to that inevitably has been both amusing and appealing.

The Big Bang Theory 10.7: "The Veracity Elasticity" Review
The Big Bang Theory regained a much-needed foothold in a pretty strong episode this week, which lays out a very big decision for Sheldon.
THE GOOD STUFF
THE NOT-SO-GOOD STUFF
2016-11-04
85%Overall Score
Reader Rating: (1 Vote)
96%