Superstore went back to politically charged humour after the episode, “Guns, Pills and Birds” from a few weeks ago, appropriately hopping on the U.S. Election bandwagon this week with, “Election Day.” Fortunately, as with last week’s Halloween-themed episode, this was an excellent offering that was both very smart and very funny, delivering a trio of superb storylines that spotlight various angles of political satire across Cloud 9.

The first plot pairs up Glenn and Dina, who continue to get along horribly, as they try to take charge of the store being used as a voting location for St. Louis. Their separate efforts eventually lead to disaster though, when they cause coffee to be spilled into a ballot box, ruining every vote within it. This has the two managing enemies of Cloud 9 frantically trying to fix the situation, which naturally only makes it worse. Eventually, the ballots not only end up destroyed, but soon after permanently lost, leaving Glenn and Dina thinking that they’re about to face some very big consequences for their actions.

Glenn and Dina being forced to work together when they clearly hate each other has always led to standout humour for Superstore, and that remained very true in this episode. Their separate efforts to fix the mistake and then destroy the evidence all brought plenty of chuckles, particularly when Cheyenne overhears the two arguing about accidentally destroying the ballots, leading to Dina trying to figure out what Cheyenne knows. Cheyenne is predictably too dumb to catch on to what really happened with her managers though, especially when the show cleverly blended this plot with one of the other plots, nicely calling back to when Mateo learned that he is an illegal immigrant during the events of this past Summer’s special episode, “Olympics”, by having Cheyenne mistakenly think that Dina has learned about Mateo being an illegal alien.

Before destroying the ballots with Glenn, Dina impresses on all of the employees that they need to vote, and that she expects a 100% employee turnout for anyone old enough and registered. Naturally, this creates a big problem for Mateo, since he’s an illegal immigrant that is obviously not registered to vote, and since Cheyenne is under 18 and can’t vote, she becomes his confidant with the situation. Cheyenne floated between the Mateo plot and the Glenn/Dina plot, but she did very well with both storylines, particularly when she has the surprisingly smart suggestion for Mateo that he should just try to steal a sticker that claims he voted, since Dina obviously can’t check the ballots to make sure every employee did indeed vote. 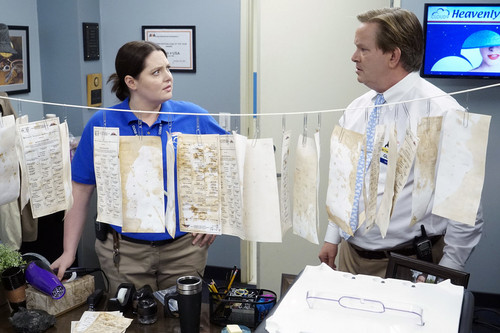 This leads to a hysterical sequence of events where Mateo tries to get ahold of a sticker by any means necessary. Mateo’s huge efforts constantly blowing up in his face was incredibly funny, and a highlight joke in this episode came when Cheyenne decides to ‘help’ him by forging him a sticker, which is an obviously fake sticker that didn’t even spell, “I Voted” correctly. She means well. Better still is that the storyline rounded off with Mateo simply buying Garrett’s sticker from him, and Garrett simply waving off Mateo’s attempts at explaining his shady behaviour by saying that he absolutely doesn’t care. This was a fitting and funny conclusion to the story that had Mateo escaping the eye of scrutiny, at least for now.

The remaining storyline had Jonah and Amy realizing in a Cloud 9 pamphlet that the corporation is trying to urge employees to vote for an anti-union candidate that isn’t offering the extended sick days and heightened minimum-wage demands of his opponent. The two decide to make their own pamphlet, which Garrett also decides he doesn’t care about, and pass it around to the employees, successfully getting them to vote the other candidate in!… Then nothing happens. While this initially seems anti-climactic, it was actually a smart conclusion, since it plays into the whole idea that you can never be certain of how reliable an elected candidate will ultimately be. Not only that, the story was even better served by indicating that the implied attraction between Jonah and Amy isn’t merely coming from Jonah’s end. Amy is clearly disturbed when it’s revealed that Jonah is dating someone in this episode, which she then seems visibly stressed about, eventually substituting Jonah with Marcus when Jonah’s shift is over, and having Marcus mis-read Amy’s behaviour as flirting with him. By the end, Amy seems to be putting together that she might have feelings for Jonah. Is it truly going the other way now though? Is anything even going to come of it, since Amy is married? 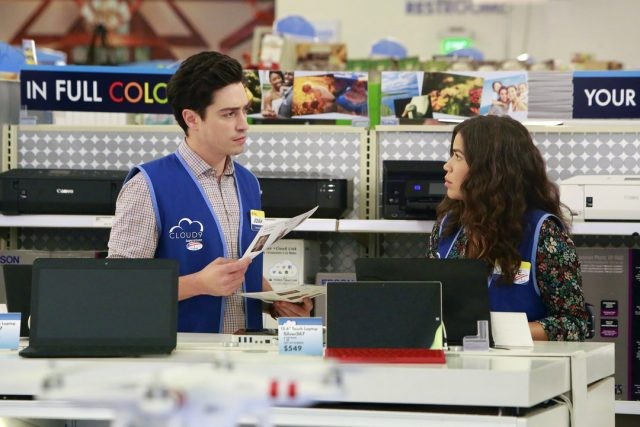 As great as the rest of this episode was overall, the most satisfying bit was the brilliant over-arching joke behind every political event this week; They all had mundane, anti-climactic conclusions. Again, this is actually very inspired, because it leads into a very intelligent satire of the modern political process; Everyone seems to lose their composure and get hysterical about politics and the political process, this year more than ever in fact, but in the end, few things if anything actually ever change for the country or the world, making the big hullabaloo feel very overblown and ridiculous when it’s reflected on. Even the Glenn/Dina plot has an effectively anti-climactic conclusion, as the two try to record each other admitting to destroying the ballots in a hilarious final gag, once they learn that vote-tampering leads to a $10,000 fine and five years in prison, only to have the vote counters declare that they’re missing a lot less ballots than last time. Like so many political junkies, Glenn and Dina ultimately lost their marbles over something that really didn’t end up being a big deal in the end, and predictably, they just helped each other look like fools that didn’t ultimately get anything done. It was really smart, and really funny.

Superstore exposes overblown political hysteria in a very witty fashion this week, and used that as a vehicle for no shortage of outstanding humour across every storyline. “Election Day” feels like the perfect antidote to so much political bellyaching in the modern world, highlighting that the political process isn’t unimportant, and even a handful of votes can make a difference, but at the same time, many people have started to take politics way too seriously in the modern era, to the point where they’re far too concerned with making noise over actually solving anything. As I’ve said, Superstore can be an effective political allegory when it picks its moments, and doesn’t overuse such commentary, and this episode will likely serve as one of the show’s smartest and most memorable episodes overall, on account of superb insight that’s as potent as the superb laughs!