The second of Superstore’s two midseason finale episodes this week, “Black Friday” improved a bit on the first episode, presenting a fun and shocking final result of the show’s first Black Friday-themed offering. Worse than the hordes of stampeding customers, is the fact that one of the employee pot luck dishes gave everyone in the store food poisoning as well, after they’re already under-staffed. This creates an amusing double dose of misery for the Cloud 9 crew, before they take a complete hiatus until 2017.

Like the first midseason finale episode this week, “Black Friday” took a short while to truly get going. The show seemed to have something of a callback to NBC’s two-pronged mockumentary success with The Office and Parks and Recreation several years ago to start, as Jonah tries to tape the employees saying what Black Friday means to them. It’s somewhat funny, though I have to wonder what the point of Jonah filming everyone was. Did the show give a previous hint that he had any attachment to Black Friday, or filming interview videos? It seemed a bit out of nowhere, and the episode even dropped this idea completely past the first eight or so minutes. Still, at least a few chuckles were gleaned from Jonah being a videographer while it lasted. 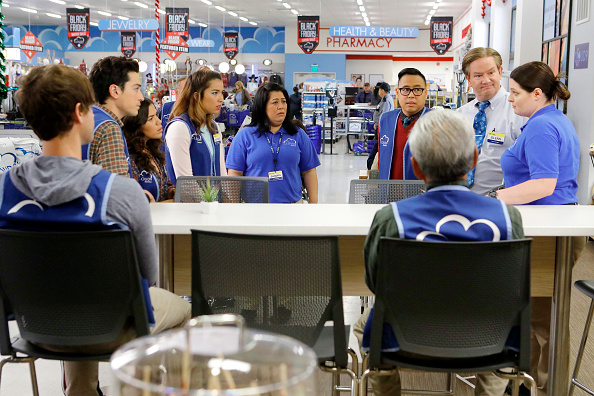 There were a few other scattershot Black Friday jokes that worked to more mixed effect too. We did have plenty of good moments with Tate, the pharmacist, as he revels in the fact that no one fulfills their prescriptions on Black Friday, leaving him plenty of time to slack off and work on his totally-not-Limitless screenplay about a pill that allows you to use your entire brain’s potential. This nicely clashed with the other, extra-miserable employees. By contrast though, a subplot of sorts with Mateo and Cheyenne trying to bribe customers after someone offers them $40 each to reserve a TV for them, didn’t seem to go anywhere of note. It led to a few middling throwaway jokes, and not much else. It’s too bad that more couldn’t be mined from this idea.

Once the food poisoning started kicking in though, the humour definitely seemed to be cranked up a notch. Seeing Glenn rapidly down pills that comically relax him was incredibly funny, especially when he has seeming outbursts (complete with aggressively cursing out his entire staff at one point!), yet they’re always spoken through calm, bright smiles. Likewise, moments like Dina trying and failing to form an orderly line while dropped to the floor from nausea was pretty hilarious, as was Garrett trying to prolong an announcement by reading off the plots of various Tom Hanks movies, so he can avoid going on a cash register. Garrett’s running joke also made it particularly satisfying when he was the one to save everyone from sacrificing their jobs and the store again in the climax, proudly declaring that he hates working at Cloud 9, but made a promise to work the bare minimum, and no less than that.

As the humour and silliness with Black Friday was effectively going on, Amy also initially mistakes her nausea for morning sickness, even taking a pregnancy test while the rest of the employees cycle in and out of the toilets. The test comes back negative, which initially has Amy relieved, though she later starts to experience a complicated mix of emotions, whereupon she realizes that she imagined having more children, yet doesn’t seem to want them with Adam. Amy and Jonah humourously discussing the matter while both on the toilet, trying to hold out until the other one leaves, was also one of the episode’s highlight scenes. Things then start winding down with this storyline as Amy leaves a message for Adam admitting that she’s not happy, and they should talk. Does this mean that Amy’s marriage will be over by the time the show returns next year? Looks like Jonah may get his shot after all, even if many viewers no doubt saw this story turn coming.

Another more surprising story turn wonderfully capitalizes on something that’s been teased since the Halloween episode a couple of weeks ago however, where Garrett first finds himself confused with an apparent attraction to Dina. Garrett and Dina have gone back to butting heads since then, even in this very episode, but the hint of chemistry has still cleverly lingered. At the end of the episode, Dina goes to Garrett in the break room, and out of nowhere, kisses him after congratulating him on saving the store, telling him to go get all the breath mints in Cloud 9, then meet her in the photo lab in ten minutes, or she’ll start without him. Garrett actually goes for it too! Looks like the Garrett/Dina romance really is going to happen, and that’s yet another very exciting prospect to look forward to for Season Two’s back portion, when Superstore resumes in January!

While not every joke felt fully-realized, “Black Friday” was a pretty strong note to cap off Superstore’s 2016 run with. The romantic shuffling for Amy (and likely Jonah), along with Garrett and Dina, presents a great hook to leave things off on before 2017, and the majority of jokes that did feel fully realized all worked for great, high-quality laughs. There was slightly sharper humour mined from Black Friday in contrast to Christmas for Cloud 9, but this ultimately had the show’s midseason finale rounding off on a healthy final result. It will be a long couple of months before Cloud 9’s doors open again, but the store’s Holiday tomfoolery ensured that we could begin that midseason break with big, satisfied smiles.