The world of Ivalice, a place rife with political intrigue and dark magical influence, has seen more expansion than most realms pioneered within the Final Fantasy franchise. While Ivalice began life in Final Fantasy Tactics, and later expanded to include loose spin-off, Vagrant Story during the era of the original PlayStation, it’s likely the mainline Final Fantasy XII that serves as the most famous host to Ivalice’s expanded lore. That game released on the PlayStation 2 a whole decade ago, and with Final Fantasy XII observing its ten-year anniversary in 2016, the time was naturally right to announce an all-new remastered build of the game, Final Fantasy XII: The Zodiac Age, which will release on PlayStation 4 at some point next year.

During a recent Square Enix media summit, I was given the chance to go hands-on with an unfinished build of Final Fantasy XII: The Zodiac Age, via a private demo that allowed me to experiment with a snippet of the adventure that I and many others came to adore on the PlayStation 2 so many years ago. The demo gave me a full level 28-29 party of the game’s six recognizable protagonists, Vaan, Ashe, Penelo, Basch, Fran and Balthier, along with two areas to move between; The Salikawood, and Phon Coast. This placed me around the recognizable middle of Final Fantasy XII’s lengthy main story progression, giving me plenty of means to see how the game is shaping up in its new PlayStation 4 build.

More than simply being an HD remaster for the current console generation however, Final Fantasy XII: The Zodiac Age also functions as the first-ever Western localization for Final Fantasy XII: International Zodiac Job System, a special edition of Final Fantasy XII that added new License Boards to level up your characters with, the option to speed up movement and battles using the L1 Button, new post-game play modes, and more. Final Fantasy XII: International Zodiac Job System may have ultimately been left in Japan during its original PlayStation 2 run, much to Western fans’ chagrin at the time, but like Square Enix’s recent Final Fantasy X/X-2 and Kingdom Hearts remasters, upgraded PlayStation hardware has now given this classic Japanese RPG a chance to expand its content for Western fans, along with giving them all-new trophies to strive for on PlayStation 4 to further increase replay value.

Final Fantasy XII is definitely one of the best-looking games in the PlayStation 2 library, though two generations is a long time of hardware upgrades in gaming, so the game won’t turn as many heads now as it did in 2006. Still, the native 1080p HD revamp in Final Fantasy XII: The Zodiac Age adds a great new coat of paint to what’s already a visually well-presented adventure. Environments, character models and text prompts have been touched up with added definition and detail to feel more current with PlayStation 4 standards, which also applies to the couple of in-game cutscenes that were in the demo, even if there were no pre-rendered FMV cutscenes to assess. The game still looks pretty quaint compared to the all-new and super-gorgeous Final Fantasy XV that’s hitting PlayStation 4 (and Xbox One) soon, but the graphical upgrade in Final Fantasy XII: The Zodiac Age still seemed to turn out quite well. Final Fantasy XII: The Zodiac Age has definitely not cut corners with this game’s move to PlayStation 4, and while you can somewhat tell that this is a game originally designed for PlayStation 2 when you scrutinize some of the textures, it’s not something that many players are bound to dwell on.

The game’s framerate still seemed to be locked at 30fps in the demo, just like its original PlayStation 2 build, though considering that Final Fantasy XII is a very methodically-paced game anyway, that may not be an issue for many people, should the final release also be restricted to 30fps. Perhaps the best element of the remaster’s presentation as far as I could experience however was the re-composed music, which takes the familiar orchestral music score from the original PlayStation 2 game, and enhances it with sharper sound clarity and new composition flourishes. As much as the new HD sheen adds to the bright, crisp visual enhancements in Final Fantasy XII, it’s the new soundtrack revamp that makes it feel especially modern, as the score translates effortlessly to current PlayStation 4 sound convention, along with more highly-pronounced sound effects that lend further to the intensity of battle than they did on PlayStation 2.

If you happen to be unfamiliar with Final Fantasy XII and its significance to the larger franchise, here’s a quick rundown of its fundamentals; Your six protagonists are on a quest to avert a dangerous war that threatens to engulf their home country of Dalmasca, situated in the world of Ivalice. To do this, they move between various settings that have them proceeding the story, entering settlements, exploring dungeons, and naturally, fighting monsters. Final Fantasy XII was the series’ first mainline numbered entry (excluding the preceding MMORPG, Final Fantasy XI Online), to do away with random monster encounters as well, with all monsters instead being fully visible on the battlefield, able to be engaged or ignored, so long as your party avoids rousing their attention. Combat is still turn-based, though characters act automatically according to a preset list of A.I. commands called ‘Gambits’ in this game, which make your characters perform certain actions under various battle circumstances, such as healing injured allies when their HP gets too low, or casting a spell when hit with a certain attack. Players also have the option of intervening with spells and items using a manual menu for a character’s next command, should they choose. 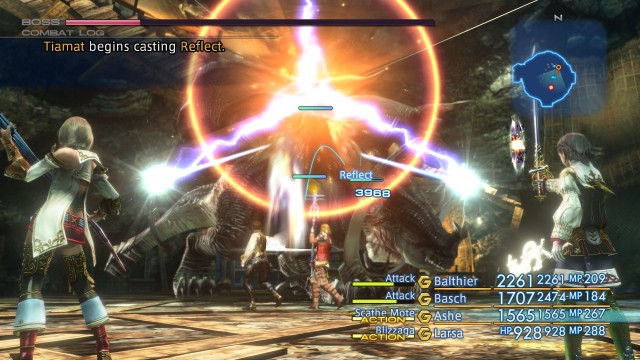 Your characters can be arranged in an active party of up to three heroes, with all characters gaining EXP as you fight and defeat monsters (unused characters still gain EXP from battle, though they gain less than active characters that directly participate in a battle), and this EXP has them leveling up and growing stronger when it reaches certain counts, as with most RPG’s. The wrinkle however is that characters also gain LP, or License Points from battles that are won, which can be spent on activating adjacent squares on a ‘License Board’ from the character menu, which grants your heroes new skills, spells and passive abilities. Despite the battle system being a drastic departure from mainline Final Fantasy adventures that came before, Final Fantasy XII’s mechanics aren’t difficult to grasp after a short while, with its battle system actually being simpler and more streamlined than the previous Final Fantasy X and its direct sequel, Final Fantasy X-2.

Disappointingly, I didn’t get a chance to try out the twelve new License Boards, one for each Zodiac Sign, that will be optionally offered in the final release build of Final Fantasy XII: The Zodiac Age next year, along with the default License Board from the original PlayStation 2 build. My characters never gained enough EXP to level up and carve out new paths on their License Boards, even after quite a while of battling the present array of gradually spawning enemies, though that was alright. I still got plenty of time to see how this familiar adventure feels just as satisfying on PlayStation 4 as it ever did on PlayStation 2, and in every respect, the same quest seems to have been captured completely faithfully in the leap to current-gen hardware. The option to speed up progression and combat with the L1 Button also helps better navigate through areas where you either need to level-grind and want to save time, or perhaps hunt for treasure without wasting a bunch of time cutting through weak foes that just get in your way.

I could just let my characters automatically cut through hordes of pumpkin-headed tricksters, large Garuda-like brusiers and high-flying, man-eating birds without too much trouble in this demo as well. Every so often, I threw in a spell or a special skill for the sake of variety, but beyond some healing spells here and there, it largely wasn’t necessary. The demo had a perfectly reliable set of Gambits in place, which left my party practically impervious to defeat, and every protagonist seemed to have learned all of the same basic skills such as stealing items, guarding wounded allies, and assessing monster stats. A few specialized characters, namely Penelo as a dedicated spellcaster, did seem to foreshadow some of the ways that the Zodiac-themed License Boards could forge a more class-based character party than the previous PlayStation 2 build of Final Fantasy XII would probably sensibly allow though.

There were no bosses or major events standing in my way as I moved between the two areas, which were also partially barred off themselves, only giving me small chunks of the Salikawood and Phon Coast to play around in. The demo ended as soon as I reached the passive settlement in Phon Coast, which was a let-down, though also a sign that I was both appreciating the technical upgrades, and enjoying the trip down memory lane with Final Fantasy XII: The Zodiac Age. This demo was a very select, uneventful stretch of the game to be sure, one that I mostly spent just cutting through monsters and picking up randomly-generated treasure coffers, though this does seem to be a faithful and nicely touched-up recreation of Final Fantasy XII for PlayStation 4 as far as I can see, one that fans of the original game will definitely appreciate.

I obviously couldn’t assess most of the all-new content coming to Final Fantasy XII in this upgraded PlayStation 4 build, since it’s primarily either post-game content, or arranged at the start of the adventure in the case of the new License Boards, though the fundamental appeal of the experience is definitely well intact. It’s established Final Fantasy fans that will probably get the most out of this package, especially if they have a particular love for Final Fantasy XII, though if you’re a general RPG enthusiast that missed out on this well-produced offering during its original PlayStation 2 run, Final Fantasy XII: The Zodiac Age so far seems like the ideal way to experience this high-quality RPG adventure. I wasn’t really floored by what I saw in the demo, since I’m already well familiar with Final Fantasy XII from the PlayStation 2 era, but I did conclude my play session well assured that this especially impressive RPG is getting the VIP treatment when it makes its way to our current console generation.

(Final Fantasy XII: The Zodiac Age will release exclusively for PlayStation 4 in 2017)