After a whole month off the airwaves, Brooklyn Nine-Nine finally returned this week, with, “Monster in the Closet”, finally bringing Jason Mantzoukas back to the show, with the re-discovery of Adrian Pimento in Boyle’s closet. After Pimento is brought back into the precinct, an overblown reaction from Diaz leads to the two declaring that they want to get married, forcing Santiago to spearhead a fourteen-hour wedding planning effort with most of the detectives and Holt, while Peralta joins Pimento and Gina in the hunt for Pimento’s grandmother’s earrings.

Most of this episode’s over-arching story largely existed as an excuse for an onslaught of silly jokes, as this was one of those Brooklyn Nine-Nine episodes where reason is even less present than usual. What truly matters is that the jokes are funny, and they are for the most part, so if it’s laughs you want, you’ll be satisfied, as usual. It might have been best if the plotting was a tad tighter though, since the initial Pimento/Diaz wedding attempt being used as mere gag fodder feels like a bit of a missed opportunity from some angles, even if the result isn’t necessarily a bad one.

Many of the best jokes in the episode revolved around the Peralta/Pimento/Gina plot, as Peralta grows frustrated with Pimento and Gina mistaking every random event as a sign from the universe that divine forces don’t approve of Pimento getting married. Pimento suddenly being a spiritual person feels a bit out-of-nowhere (even if it’s somewhat explained later), but Gina being on his side certainly made sense, creating the rare scenario where Peralta had to be the reasonable one in the situation. That certainly doesn’t happen very often!

The only slight missed opportunity in this storyline is when the antique shop that had the earrings burned down, and Pimento deduces that it was arson and insurance fraud, motivating him to break into an upstairs area with Gina for the earrings, which Peralta begrudgingly tags along with. The group is eventually chased out, but then, that’s the last we hear of this situation. Wait, so these insurance scammers just got away with it? Maybe the situation will be dealt with off-screen, but it might have been even funnier if Peralta had to pass off a collar as a more pressing last-minute obstacle than finding the earrings, especially when all of the Nine-Nine’s lead detectives are gone. 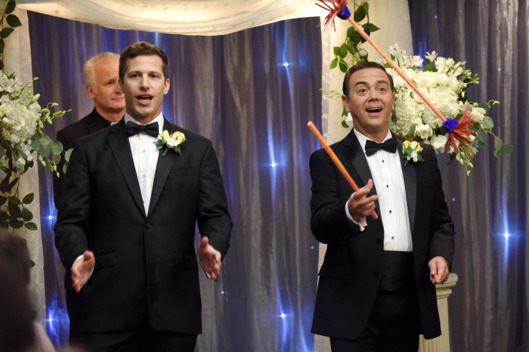 Fortunately, plenty of fun was had with Santiago trying to micromanage a wedding in fourteen hours, even if it felt like some of the issues here were a tad forced and rushed through. Santiago disagreeing with Holt over a balloon arrangement led to some funny jokes, and was one of the better running gags, thankfully, as was Hitchcock and Scully being the most useful people in the planning. That role reversal for Hitchcock and Scully actually worked all the better when the same happened with Peralta in the other storyline too, especially since this turn didn’t come at the expense of Hitchcock and Scully being comically lazy.

All the while, Diaz gets drunk after she discovers a classy drink of peach juice and champagne, with Santiago sending in Boyle, and later Jeffords, to try and sober her up. Diaz playing into Genevieve being nervous about marrying Boyle however (yet they adopted a child together?), along with playing into Jeffords’ insecurities with watching his baby girls grow up and get married one day, leads to Boyle and Jeffords becoming just as smashed as Diaz. Holt even joins the drunk detectives after Santiago finally comes clean that she hates his balloon arch! Again, the final result led to some great jokes, though Boyle’s and Jeffords’ insecurities did feel a little more hastily brought up and abandoned than they probably should have. 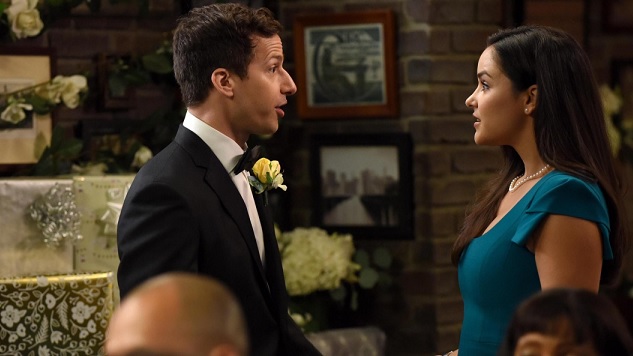 Everything all culminates in an impromptu, yet successfully built ceremony where Diaz and Pimento separately realize that they’re not ready to get married, which at least helped to justify Pimento’s sudden spiritual awareness and Diaz’s excessive drinking. There was some good character growth derived from the two resolving to actually go on dates and get to know each other, though this puts Brooklyn Nine-Nine in an odd position going forward. Does this mean that Diaz and Pimento will eventually have another wedding? Will they just break up sooner or later? If they do have an actual wedding someday, it would almost be better to have it off-screen, since it seems like the show has used up a lot of its best Diaz/Pimento wedding jokes already with this storyline.

“Monster in the Closet” made for a fun return for Pimento, and for better or worse, it did have Diaz and Pimento logically realizing that they’re not ready to get married, and need to flesh out their relationship more. Some of the story elements needed the same degree of better fleshing out, though the jokes were still on point in this new episode of Brooklyn Nine-Nine, which is good to see after the show took several weeks off. This episode does once again beg the question of whether Pimento will stay at the Nine-Nine, or whether the series will find yet another excuse to make him a recurring personality in the background however, though at the very least, it doesn’t seem like his relationship with Diaz ended up in any real danger with his absence.

Brooklyn Nine-Nine 4.6: "Monster in the Closet" Review
Brooklyn Nine-Nine returned after a month's hiatus with funny jokes and an amusing Pimento comeback this week, even if not every element of the plotting was fully fleshed-out.
THE GOOD STUFF
THE NOT-SO-GOOD STUFF
2016-11-16
82%Overall Score
Reader Rating: (0 Votes)
0%