With the unresolved plot thread of Tara and Heath still on a two-week scavenging mission, which sent them on their way towards the end of Season Six this past Spring, The Walking Dead finally checked in with these two characters again, even if it had to eat up an entire episode to do it. “Swear” brought back a recent experimental format that this show has grown quite fond of recently, whereupon it will use an entire episode’s length to flesh out a single character, or maybe two or three characters, to help deal with The Walking Dead’s present ensemble being pretty massive at this point.

As the rather uneven Season Six of The Walking Dead demonstrated however, these episodes could either be brilliant, such as the Morgan-centric, “Here’s Not Here”, or incredibly tedious, such as the Sasha/Daryl/Abraham arc that founded the faulty, “Always Accountable.” “Swear”, with its events almost entirely revolving around Tara, is certainly acceptable, and does help service Tara’s character, after she seemed to regress a bit as a murder-happy thug at that Savior outpost during Season Six. Heath, however, is pretty noticeably swept aside, at least past the intro portion.

The Walking Dead is in a bit of a bind with Corey Hawkins, as he’s been hired to headline FOX’s 24: Legacy, which is debuting in February. This means that Heath can’t be readily available for The Walking Dead, but considering how important his character is in the source comics, AMC can’t just kill him off. So, we get this weird halfway exit that feasibly allows Heath to return in the future, but also hastily runs through a debate about Heath not having the courage or desire to save Tara’s life after Tara accidentally awakens a horde of Walkers buried under a pile of sand on a bridge (how did that even happen?), by having Heath just bail out Tara after appearing to be surrounded by Walkers, before watching Tara tumble off a bridge.

It might have been more effective if Heath had just disappeared, as was hinted when he ducks into an unseen corner before saving Tara, and his exit had been left ambiguous, suggesting that he was equally likely to have abandoned Tara as he was to have tried to save her before she fell off the bridge. This is especially true when one sees that the episode uses yet another of those tired Walker fake-outs to make us think Heath got killed off-screen towards the end, but of course, it’s just a Walker that looks like him. Dammit, AMC, quit it with this! You’ve even started doing it every so often on Fear the Walking Dead! it’s an incredibly annoying canned trick that only works once, not as something you can abuse whenever you need a cheap reaction from the audience! 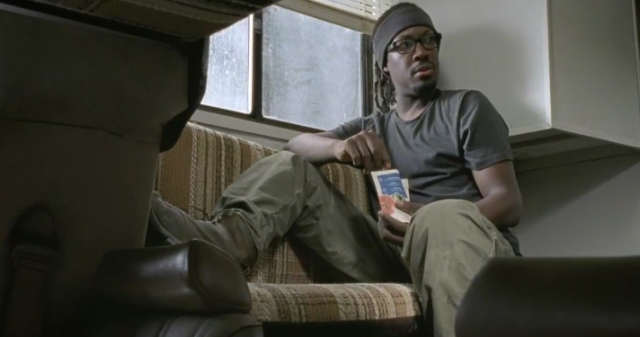 Anyway, Heath’s half-exit aside, Tara eventually washes ashore somewhere else, and is given supplies by a young woman named Cindy, who also saves Tara from getting impaled through the skull by a child named Rachel. Tara eventually follows Cindy back to her settlement, an all-female camp that quickly subdues Tara and holds her prisoner. This was a fairly interesting idea, and mercifully, the all-female camp didn’t turn out to necessarily be a ‘womens’ only’ camp that blamed men for all of the problems of the Walker apocalypse, a low-hanging fruit that many other shows would have run with.

Instead, these women are all that’s left of another bigger colony, which was ransacked by The Saviors, with The Saviors also killing all of the men, and any boys older than ten, which I guess was all the boys. This is why the women retreated into the woods to live as a secluded society, shooting anyone who comes near them on sight. This has Tara in quite the pickle, as she now knows about the village, even if by accident, and can’t be allowed to take that information anywhere, lest it lead The Saviors back to these women’s doorstep. They try to get around this by making Tara stay, though Tara insists that she has to get back to her own community, particularly since Denise is waiting for her. 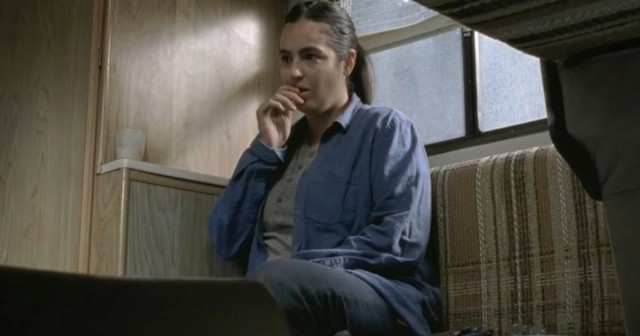 Another smart element to this episode is that it effectively acknowledged how long Tara has been away from the other core characters on The Walking Dead right now. After all, for all she knows, all of The Saviors entirely died at that outpost last season. It was a bit annoying that one of the villagers spoiled the surprise for Tara however, namely that the people she killed were merely an outpost, a fraction of the actual numbers behind The Saviors. It was a missed opportunity for a dramatic scene at Alexandria, since we know that Tara is already going to receive a gut punch when she returns, since she has to learn about Denise being killed during the events of last season.

Sadly, that wasn’t the only missed opportunity in, “Swear” either. The episode spent way too much time with a community that just ended up being ditched at the end, as Tara thinks she’s about to take them to deal with Alexandria, only to be almost shot and killed by them in the woods, barely escaping with some more help from Cindy. Tara knowing about this heavily-armed village does provide an out for when Rick’s crew, or at least the Negan dissenters, need to arm up to take on The Saviors in the inevitable rebellion that’s brewing at Alexandria right now, but Tara cleanly escapes them and just makes her way back to Alexandria at the end of the episode, surprisingly easily. 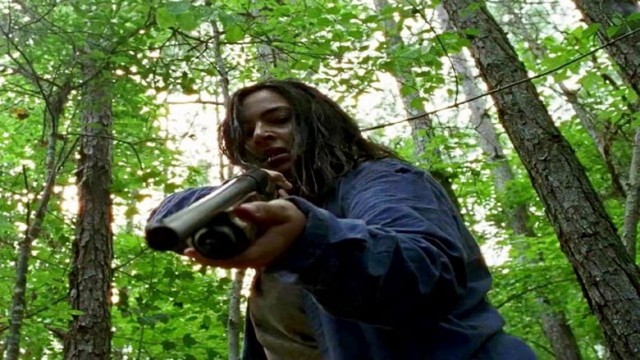 This hasty return for Tara also leads to the dramatic reveal of Denise’s death to her being awkwardly squished into the final couple of minutes, and left mostly off-screen. Not only that, but the fact that it’s Rosita trying to comfort Tara, with Rosita not even mentioning that Abraham was killed by Negan at the start of the season, just feels odd. The episode ended on a really weird, unsatisfying note in general, as if it just ran out of time to address everything going on with Tara. Tara not blabbing about the village is also difficult to justify, considering that they just tried to murder her in the woods. Maybe it’s loyalty to Cindy, if no one else?

“Swear” is a pretty obvious filler episode of The Walking Dead, one that mainly just exists to bring Tara properly back to Alexandria, now that Alanna Masterson is done with her real-world pregnancy that had her sitting out most of the latter half of Season Six. In that sense, this episode had a big disadvantage from the get-go, since it was also saddled with the duty of getting rid of Heath without killing him off, while also introducing a new settlement that may come into play later, but for now, had a bunch of development that ate up almost the entire episode, without any real lasting payoff.

The real battle against The Saviors is obviously coming, on that note, but it’s definitely not coming soon. That reality seems to have contributed to the same uneven quality that plagued Season Six throughout much of Season Seven’s front half. With just two episodes of The Walking Dead left this year, hopefully things get a little more exciting before 2017.

The Walking Dead 7.6: "Swear" Review
The Walking Dead devoted an entire episode to bringing Tara back to Alexandria this week, which led to a filler offering that didn't present much real excitement.
THE GOOD STUFF
THE NOT-SO-GOOD STUFF
2016-11-28
70%Overall Score
Reader Rating: (0 Votes)
0%