Gotham has seen a few speed bumps in the setup for this week’s midseason finale, but fortunately, the front half of the current season managed to wrap up pretty well. “Beware the Green-Eyed Monster” did a pretty great job of wrapping up the ‘Mad City’ selection of episodes for the show, and beyond a slightly rushed finale, its storytelling managed to be effectively on-point for pretty much all of the ongoing story arcs between the leads.

Now that we know that Mario Falcone is infected with the Alice Tetch virus, Gordon is racing against time to get Leslie away from him. The events of this episode occur around Leslie’s and Mario’s wedding day though, and after Gordon follows leads to a successful chance to arrest Mario, he’s shocked to learn that Mario’s test for the Alice Tetch virus came back negative. This has the GCPD forced to let Mario go, and Gordon charging into the church to order Leslie not to marry Mario.

Since we know that Mario has the virus, and somehow beat the test, this provided a great opportunity for Mario to put his own twisted plan in motion for Gordon. Where Barnes’ anger towards the guilty was amplified by the virus, Mario’s jealousy with Leslie was brought out, and this has Mario desperate to make Leslie hate Gordon. Mario could have easily planted some transparent lie in Leslie’s head, but I have to admit that Gordon ultimately being the instrument of his own downfall with Leslie was a far better result than that. Mario successfully paints Gordon as no more than a jealous ex by just leaving Gordon to his own devices, in turn turning Gordon’s innate heroism against him. This motivates Leslie to leave Gotham City with Mario, retreating to a remote cabin, as Mario asks one last time if any part of Leslie still loves Gordon.

This is the big point where the episode did falter a bit, though merely because it had to cram a lot of resolution into the hour-long space. When Leslie tells Mario that some small part of her will always love Gordon, the virus ultimately wins out, and Mario prepares to murder Leslie with a knife. Gordon manages to get the information of Mario’s and Leslie’s whereabouts from Carmine Falcone when he promises to bring Mario back alive however, even shooting his two enforcers in the legs so they can’t follow (damn, Gordon!), and eventually rushes in, just as Mario is about to stab Leslie.

In a split-second move, Gordon shoots Mario twice in the chest, making him drop the knife into the nearby water, and fall onto the ground below. The episode then ends with Leslie’s horrified face. It’s a great final cliffhanger to leave Gotham on for the end of its 2016 run, since Mario is almost certainly dead, meaning that Gordon not only completed the tapestry of lies that Mario built around him, but he also broke his promise to Carmine Falcone, a very powerful enemy that is sure to go after Gordon hard in the season’s back half now. Buzzing about what kind of fallout Gordon will now have to endure when the show returns is something that should keep fans very busy over Gotham’s lengthy midseason hiatus. 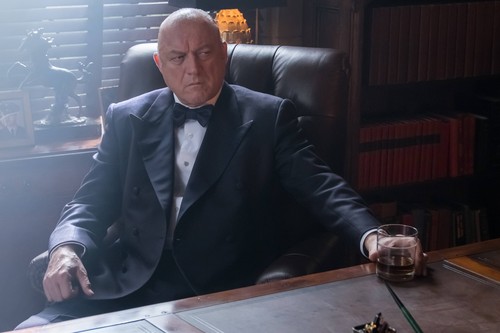 Outside of the core Gordon storyline, two other subplots unfolded with Bruce and Nygma, as the former enacts the plan to strike back at the Court of Owls with the Whisper Gang, while the latter discovers the horrifying truth behind Isabella’s death. Both storylines saw their way to great conclusions, with equally promising prospective stories set up for Gotham’s return in 2017, even if the Whisper Gang was once again dispatched very easily in Bruce’s storyline. Talon simply captures and slaughters all of Bruce’s Whisper Gang allies before the heist, meaning that Bruce, Selina and Alfred have to break into the stronghold and steal the mysterious object themselves.

The sequence of events that led up to the three snatching the object, which turned out to be a mysterious crystalline statue of an owl, was very exciting, as was a final confrontation between Talon and the three thieves. Seeing Bruce and Selina work in tandem with Alfred to take down the Court of Owls’ assassin was very cool, and fortunately, Alfred manages to drive a blade into Talon’s neck after a stranger bashes a vase over him, leaving Talon to most likely bleed out on the floor. The stranger has been following Selina for a little while already, and upon being unmasked, the woman reveals herself as none other than Selina’s mother! That’s quite a twist, though there’s not much time to ponder it, as the survivors must rush out with the object, before the Court of Owls respond to the alarms. That’s where Bruce, Alfred and Selina are all left, leading to plenty of possibilities about what that statue is, and why the Whisper Gang would think it’s the key to destroying the Court of Owls.

Finally, Nygma is paid a visit by Barbara in his subplot, who finally spells out for him fully that Penguin was the one behind Isabella’s murder, and that he was motivated by being in love with Nygma. Nygma refuses to believe this, though after offering his resignation so that he can be full-on business partners with Penguin, Penguin slips up and thinks that Nygma means romantic partners, revealing to Nygma that Barbara was right about how Isabella died. We all knew this moment was coming, but the show did one better than many would have imagined, as Nygma pays a visit to Sirens, prompting Barbara to convince Tabitha and Butch to forgive Nygma, before asking that Nygma help her make a play to become queen of Gotham City’s underworld. Now that Nygma knows what really happened, he’s more desperate than anyone to see Penguin not just killed, but destroyed, and after Penguin is gone, someone will need to take his place. It’s a pretty devious plan by Barbara, and one that has lots of promise for the season’s back half next year, as Nygma must work alongside his former enemies to take out their common foe. Looks like Penguin is in for a world of trouble when Gotham returns next year!

It’s very satisfying to see this week’s midseason finale of Gotham make good on all of the buildup that has slowed the past couple of episodes. “Beware the Green-Eyed Monster” found creative, exciting resolutions to all of the major ongoing ‘Mad City’ arcs, leaving the show in a pretty strong position for the next batch of episodes in 2017. With Mario shot dead by Gordon, Nygma and the other villains uniting to take down Penguin, and Bruce, Alfred and Selina now being a bigger target of the Court of Owls than ever, there are no shortage of great story directions that Gotham could go with in Season Three’s back half. With the curse of Alice Tetch’s blood likely resolved though, what new evil will now rise highest in its place?