After almost an entire month off the air, Agents of S.H.I.E.L.D. finally returned with a new episode this week, “Deals with Our Devils”, which picked up after the fallout of Eli Morrow’s scheme to grant himself potent element-manipulating powers. The hiatus has given Marvel fans plenty of time to catch up on the Marvel Cinematic Universe’s latest big screen movie offering, Doctor Strange, and those who have seen the movie will get some added understanding of what exactly has gone on with Coulson, Fitz and Robbie by the laws of the MCU, namely that they have been caught between dimensions.

While Coulson, Fitz and Robbie are so far avoiding the fate of Lucy and her ghostly scientists that have now all been destroyed, they gradually find themselves being pulled further and further into darkness, with a limited time to try to find their way fully back to their own plane of reality. This had this week’s episode creatively jumping between the perspectives of the agents in the real world, and the perspectives of those caught between dimensions, between commercial breaks, showing how both sides react to the same handful of scenes. 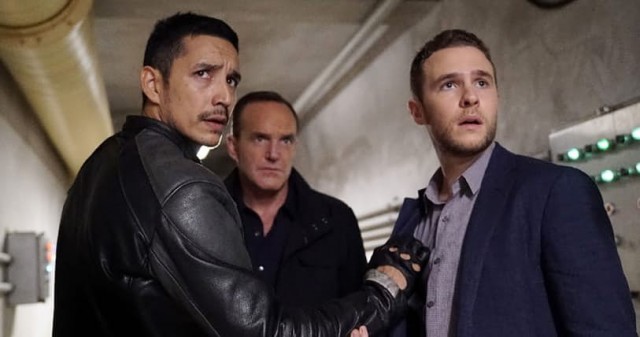 This format leads to a pretty tight, well-executed episode of Agents of S.H.I.E.L.D. overall, one that finally brings Aida more properly into the show’s over-arching narrative, while also taking the next major step with the Ghost Rider storyline. Things quickly get complicated with Robbie in the rift, as the Spirit of Vengeance begins to grow restless and try to escape him, wanting to avoid the fate that is soon to befall the trapped heroes. This forces Robbie to abandon Coulson and Fitz to chase down the Spirit, which decides to take up temporary residence in Mack.

Daisy having to chase Mack, who hops on a motorcycle and decides to go after the criminals that Eli Morrow associated with, injected some welcome action into the episode. The way that Robbie spiritually guides Daisy unseen is also cool, as is the eventual confrontation between Robbie and the Spirit, within Mack’s body. Seeing Mack temporarily become a Ghost Rider in his own right was pretty cool, if very short-lived, though some quick thinking from Robbie eventually convinces the Spirit to return to him, with a deal that should get Marvel fans very excited! Robbie promises the Spirit of Vengeance that, in exchange for leaving Mack, he will not only see through his own score, but every score that the Spirit still needs to settle. This more or less permanently positions Robbie as the core Ghost Rider of the MCU, one that will keep operating after Morrow is inevitably brought down, and puts him in a prime position to eventually headline his own spin-off series down the line, whether on ABC, Netflix or wherever else! 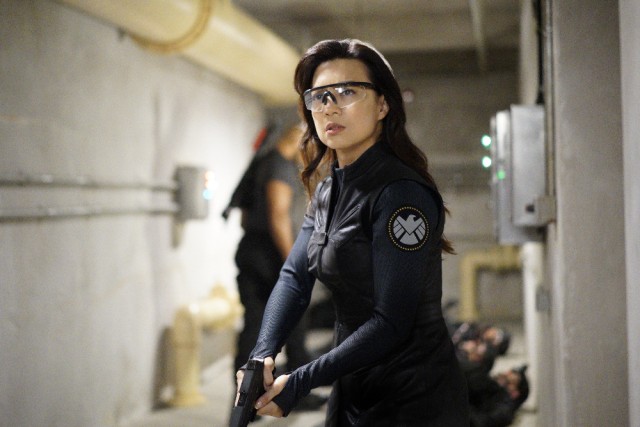 Even back at the S.H.I.E.L.D. base however, things remain plenty interesting with Coulson and Fitz, as Fitz learns that Simmons has been taken away on a secret assignment, while Coulson is unable to dissuade May from wanting to consult the Darkhold to bring back the lost agents. Seeing Coulson and Fitz helplessly fail to stop the bad things happening right around them was nicely dramatic, and the brief blow-up between the two also nicely highlighted their separate disregard for protocol that seems to have fallen by the wayside, after Coulson and May learn that Radcliffe’s assistant, Aida is not human, and was secretly built by Fitz and Radcliffe without authorization. Like I said, the show finally finds a smart way to more heavily integrate Aida into the main narrative in this episode, when Fitz manages to whisper to Aida successfully that she should read the Darkhold, since her synthetic mind can’t be corrupted, unlike those of human readers.

This trick allows Aida to tap into dimensonal manipulation to bring Coulson and Fitz back in the nick of time, with Aida cleverly using the same dimensional manipulation effects that were glimpsed in Doctor Strange, though Robbie comes back separately in the final minutes, to ask Mack if he wants to help him settle his final score with his uncle. Robbie coming back through the dormant dimensional gate at the snap of a finger, while it’s turned off no less, is a little overly convenient, as if the writers couldn’t find any logical way to return him to the land of the living, but Mack being hinted to have some leftover influence of the Spirit of Vengeance is fairly promising for the show’s midseason finale next week. 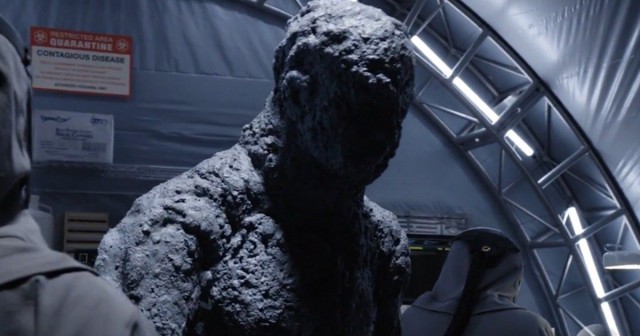 Another slight stumbling point in this episode however came from the subplot with Simmons, after she’s sent off to try and activate the dormant Inhuman husk that Senator Nadeer was keeping in her closet. There’s a couple of sweet moments where Simmons gets through to the husk by sweet-talking the person inside to come out, though as soon as she reveals the face of the man inside, she’s simply carted away and dumped back at S.H.I.E.L.D. Even when Fitz decides to aggressively confront Mace about what he did with Simmons, Simmons just runs down the hall and embraces him, as if nothing happened. It’s a disappointing fizzle to what seemed to be a rich well of drama between Fitz, Simmons and Mace, though perhaps Nadeer’s dirty secret will come back to haunt S.H.I.E.L.D. again soon.

Agents of S.H.I.E.L.D. continues to stay strong after taking several weeks off, and, “Deals with Our Devils” not only effectively stood on its own in terms of drama and excitement, but also put the show in a very strong position for next week’s midseason finale, as well as next year’s back half of Season Four. The series found a pretty smart excuse to keep Robbie as Ghost Rider even after the current conflict is resolved, and it’s satisfying to see Aida finally put to some actual use that directly benefits Coulson’s team. The epilogue showing Aida building her own brain might be slight cause for concern, but hopefully, Aida’s growing intelligence is an issue that can wait until after Morrow has been neutralized.