This week’s episode of Arrow is saddled with more duties than even this week’s episode of Supergirl, not only having to serve as the middle chapter to the four-show, “Invasion!” crossover, but also marking the milestone of the series’ 100th episode! Thus, Arrow’s continuation of, “Invasion!” had a lot to balance, both honouring the legacy of Arrow by itself, while also furthering the mysterious agenda of The Dominators. Fortunately, this is an excellent episode in just about every respect, and one that keeps The CW’s very ambitious DC Television Universe crossover going very strong as it leads into the climactic chapter on tomorrow’s episode of Legends of Tomorrow.

While The Flash and Supergirl had a less apparent presence in Arrow’s crossover episode, mostly being relegated to a single scene that unfolds with the remnants of Team Arrow in the real world, the material with the DC Television Universe personalities originating on Arrow, including Ray and Sara, who have now branched off into Legends of Tomorrow, was pretty much sublime in all respects. All the better is that this episode’s storytelling device allowed for dead characters like Robert and Moira Queen, Laurel Lance, and very briefly, Tommy Merlyn to return to the ensemble, nicely highlighting Arrow’s extensive history and development for Oliver and his crew over the current five seasons, and leaving the show going forward with a refreshing and optimistic new sense of purpose. 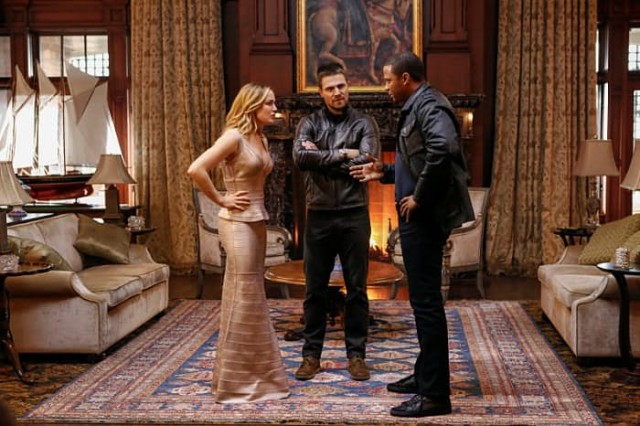 Oliver and his crew have something of their own Flashpoint-inspired moment in this episode, as The Dominators trap them in an alternate reality where Oliver and his father never boarded the Queen’s Gambit on that fateful day nearly a decade ago, and thus, none of them became the heroes that they are in the real world. Oliver still lives at the Queen Mansion with his still-living parents, is about to be happily married to an also-still-living Laurel, and even seems to be closer than ever with Captain Lance! Seeing Katie Cassidy and Susanna Thompson return to the series was very exciting, even if just for one episode, and also effectively underscored the inevitable tragedy of Oliver eventually having to lose his parents and Laurel all over again, when he starts getting tipped off that his new reality isn’t truly real.

After a series of memory flashes brings him to his lair from the real world, Oliver is shocked to see that Diggle is the Green Arrow in this fictional reality, but that Diggle also senses that something is wrong. While Sara, Thea and Ray aren’t tipped off right away, eventually they start deducing that something is wrong as well, prompting The Dominators to send in virtual manifestations of former foes that Team Arrow has fought in the past to keep everyone within the idyllic fantasy of the lives they never got to lead. This led to an especially great climactic battle before Oliver and his team escape the hallucination, with all five heroes going toe-to-toe with virtual baddies like Malcolm Merlyn, Damien Darhk, Deathstroke, the Ghosts, and even the Mirakuru Soldier that killed Ray’s late fiancee off-screen during the Season Two climax!

There were a lot of emotional, heartwarming character moments in this episode, which made it feel very warm and fuzzy for Arrow fans overall, and not just Oliver, especially viewers who have been with this series since its very first episode debuted in 2012. In fact, this episode was so stuffed with great character moments for the Arrow personalities that it couldn’t always fit every conflict that it wanted to into the hour-long space. The idea of Thea wanting to stay in the fantasy is something that initially seems dramatic and heartbreaking, but she reverses her decision in the very next minute, which feels cheap and pointless. Likewise, there’s a moment in the real world where Wild Dog decides that he hates metahumans, and thus doesn’t want anything to do with The Flash or Supergirl when they try to chase down a way to rescue their friends, only to decide he likes them a mere few minutes later. Sure, Barry saves his life from the cybernetic woman who guards the necessary piece of alien-probing technology for Cisco, with this villain seeming to be a quick-fix baddie not present in DC Comics lore. Is that isolated act really enough to make Wild Dog so quickly reverse his negative opinion of powered people though?

Fortunately, the thrills aren’t constrained to that one scene, or the big melee against former Arrow villains of previous seasons, as Oliver and the rest still have to escape The Dominators’ ship. The group manages to hijack an escape vessel and flee, only to have The Dominators’ entire battle forces chase after them. Fortunately, The Waverider rescues the craft and takes the heroes to safety, with Nate somehow managing to get to them and warp away (when did he learn to fly the timeship?), right as The Dominators prepare their big trump card against Earth, leading beautifully into tomorrow’s Legends of Tomorrow episode. Even with the big climactic showdown still on the way tomorrow, it’s awesome to see that the previous The Flash and Arrow episodes within this crossover have still found plenty of clever ways to inject action and excitement into the plot. That’s all the more true when one considers that most of this episode takes place in a false reality of perfect, non-hero fantasy, at least, aside from Diggle’s perspective!

The revelation that The Dominators intentionally targeted Oliver, Thea, Ray, Sara and Diggle precisely because they’re the DC Television Universe’s non-powered heroes (I guess Mick doesn’t count, maybe because he identifies as a villain?), is also something that has a lot of promise to come into play for the aliens’ endgame tomorrow. Even then though, that twist was another effective hook to capitalize on the non-powered folks having just as much importance in the DC Television Universe as the various metahumans, with Thea even asking at one point why the world still needs them, when it has so many powered heroes to call on now. It’s a good point, and made for some clever examination of why the non-powered heroes still matter in a universe where The Flash is around especially, and a universe where an ultra-powerful superhero like Supergirl is more or less on inter-dimensional speed-dial now.

This 100th episode of Arrow answered that question excellently, beautifully managing to capture so much love, hope and reverence for the heroic journey of Oliver and his allies on this show over five years. Doing that so well within a crossover with three other shows is all the more impressive to boot, especially when Arrow has seen some struggles compared to The Flash, Legends of Tomorrow and Supergirl lately. Once again though, those struggles are gradually starting to be left behind, and Arrow wonderfully makes its mark with its milestone 100th episode, proving that this show still has plenty of importance in The CW’s DC Television Universe, and that Oliver and his allies, both living and dead, still matter now as much as they ever did!